Well, I’m not sure anything we’ve done has ever be so hotly anticipated, so finally some news! Today I’m pleased to share with you the latest progress on our blazer and indeed what may, in fact, perhaps, let’s hope, be THE LAST MUSLIN BEFORE TESTING. 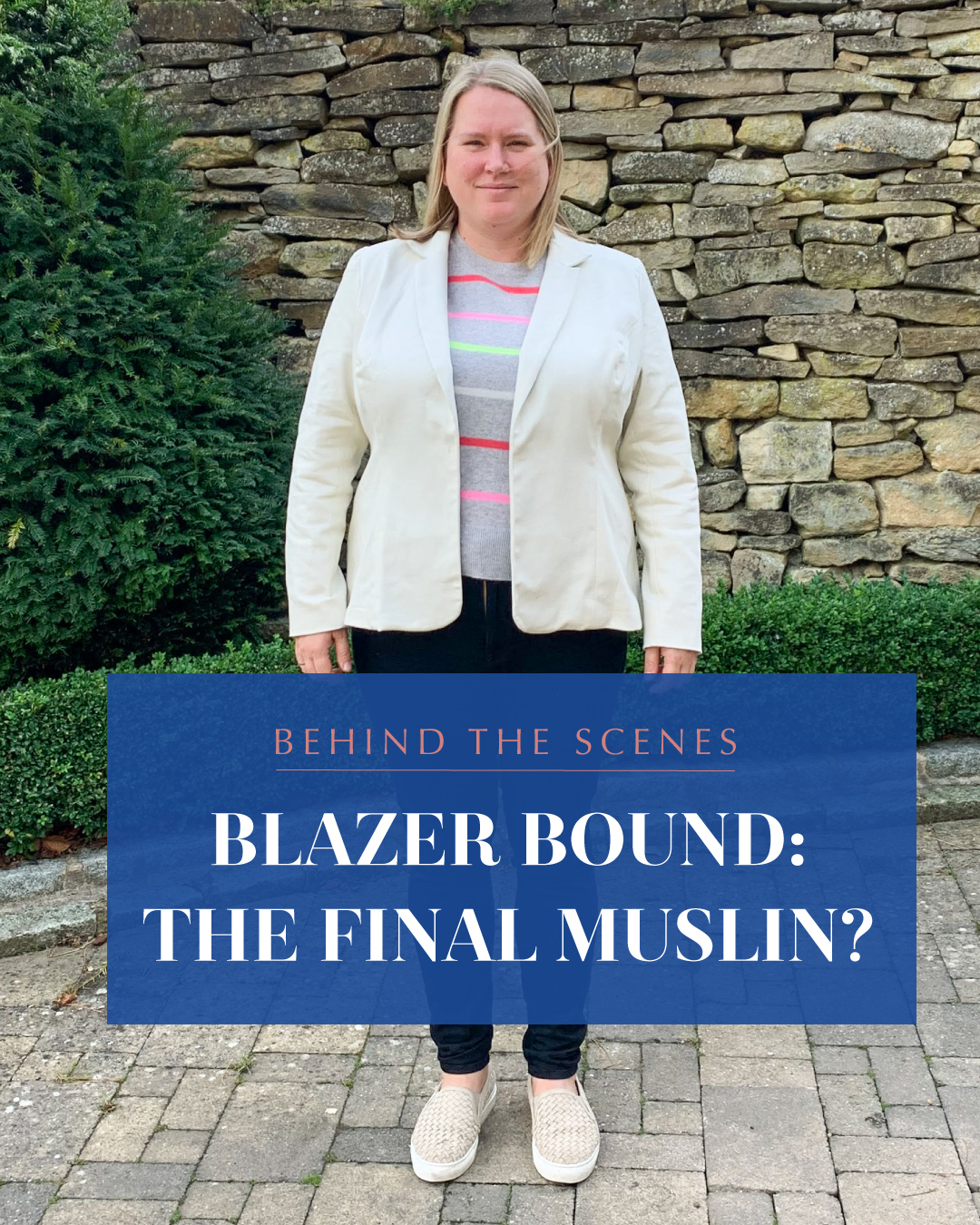 (Catch up on our full blazer development process here.)

As you have probably realized by now, this pattern is a bit of a doozy, not just because it’s complicated (IT IS!), and because making a muslin for a blazer takes quite a while, but also because of the whole pandemic situation, which has led to me (Jenny) being thousands of miles away from the rest of the team. Let’s just say that is not conducive to hands-on muslin fitting. However, when we started this series we knew there was a chance it would take a while, and one of the objectives was to reveal quite how lengthy our development process can be, so, objective achieved!

Before we move on, a caveat: I am very much not an 18 G/H at the moment, but the samples are. Right now I’m around 50″ – 42″ – 46″ which the eagled eyed of you will realize is more like a 20 G/H – 22 – 16. Not particularly helpful, that! We do have a “straight” size 18 mannequin which we also use for fitting, but it’s a challenge to fit the shoulders and neck on a mannequin, especially because it can’t move around and tell you what does or doesn’t fit. As a result, we do the best we can at this stage, which is to fit on the mannequin, and then on me, but bearing in mind that right now my boobs are 2″ larger than the 18 and my waist is 4″ larger. Were we not in the middle of a pandemic, we’d get an 18 G/H model into the studio to try things on, but needs must! The next muslin we make will be a 20 G/H.

All that said, it’s actually a little less important than you might image. The reason is that even if we perfectly fine-tuned this blazer for my body – that doesn’t mean it would fit everyone else’s perfectly. We like to get a muslin 80 – 90% of the way there, but then it’s much more productive to move to testing, where we can see the fit on a wide range of testers. I, for instance, have a VERY forward shoulder, but we don’t want the garment to only fit that type of shoulder angle, so the group of testers is super helpful for enabling us to find the “average best” fit across a range of body types.

So despite the feedback we gave on muslin 3, it turned out that we didn’t adjust enough. We had very similar issues with the width of the shoulders, puffing out at the bust, excess fabric at the underarm princess seam, and above the boob. 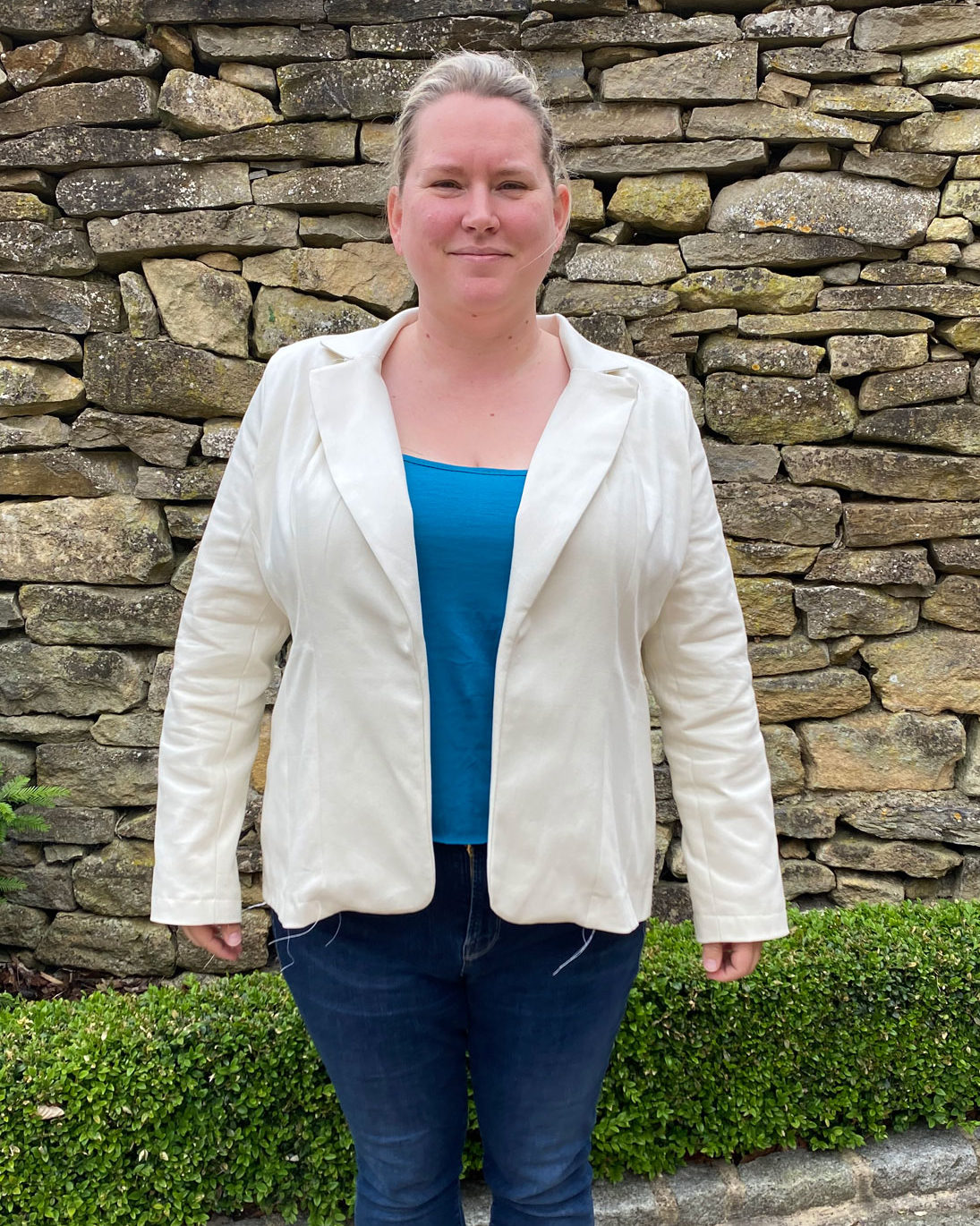 Here you can see that I pinched out the left side (and pinned it) and how much better it looks than the right. 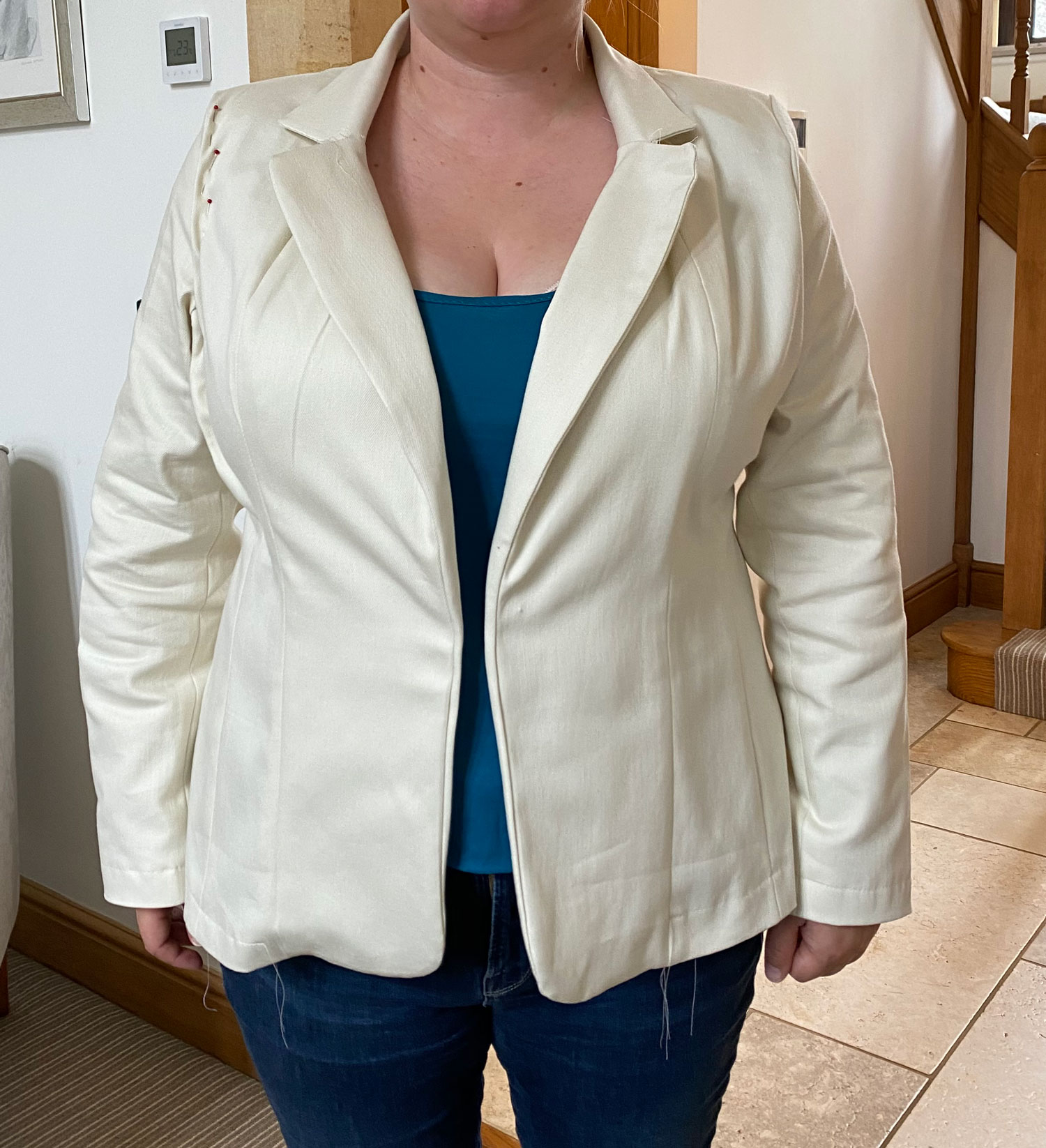 And here’s where I pinched at the princess seam 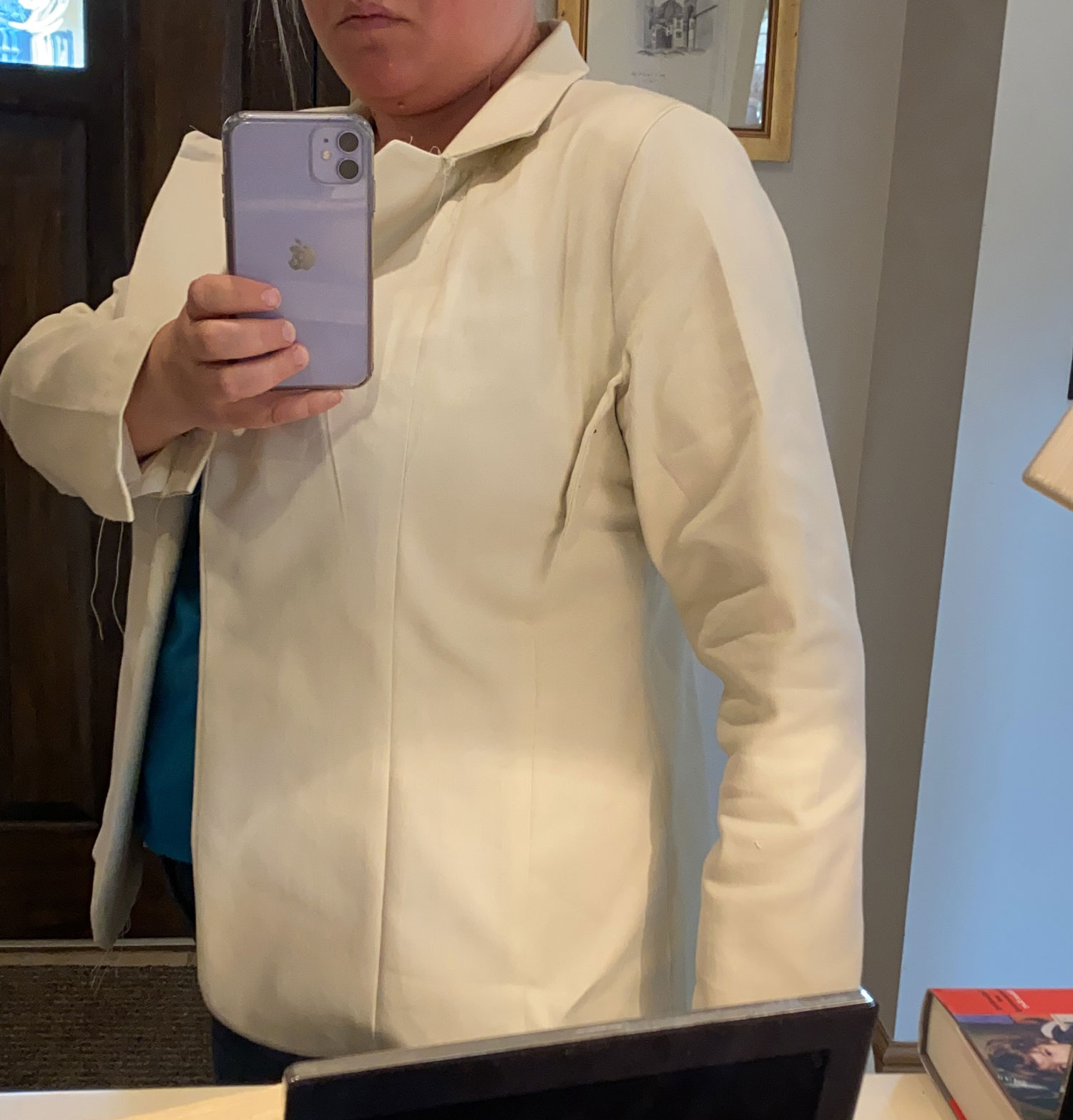 All that said, we had the thought at this point that maybe the two princess seams were just TOO much shaping and causing more issues than helping.

The feedback we gave to our drafter was:

If you’re thinking hmmm this would be so much easier if the pattern drafter and sample and model were all in the same room, you’d be RIGHT! But alas it is not to be, so on we trot.

Allllllrighty. Before we go on, another caveat: white muslins always look sort of terrible in photos! For some reason, this looks way better in person and I have no idea why.

The good news is, it’s way better now with one princess seam and those areas removed (another reminder here that it’s 1 size too small at my boobs and 2 sizes too small at my waist, and I have much smaller arms than an 18 and a very forward shoulder). 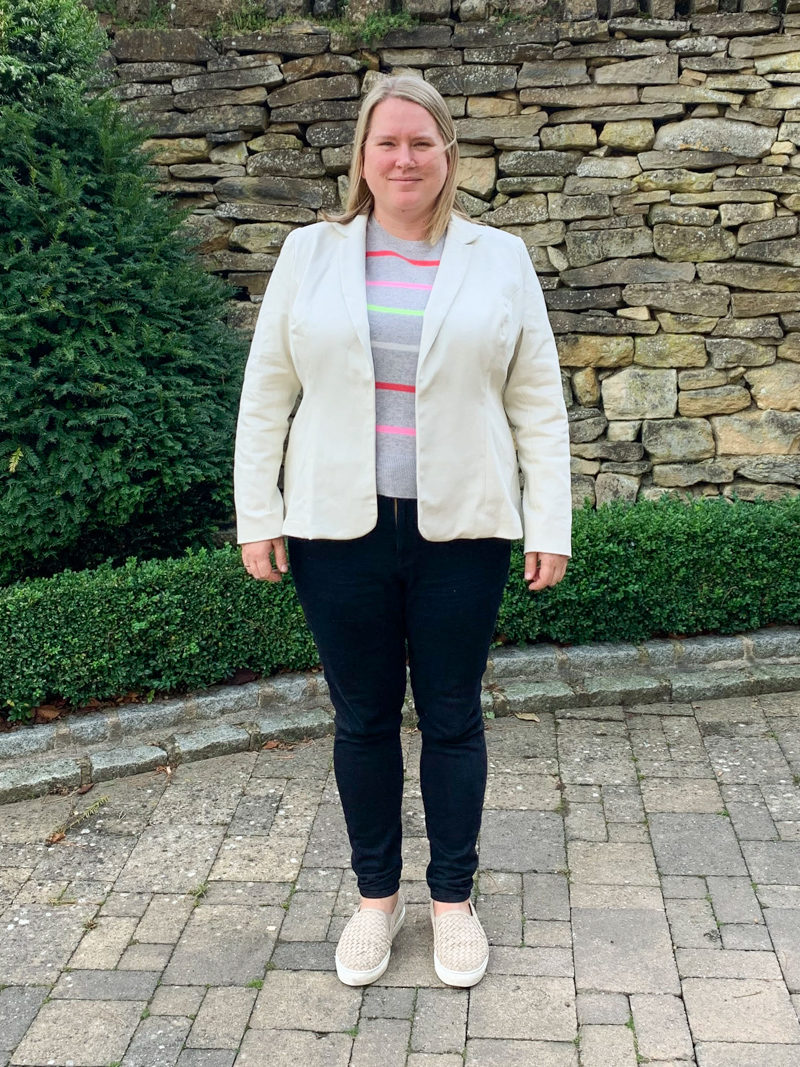 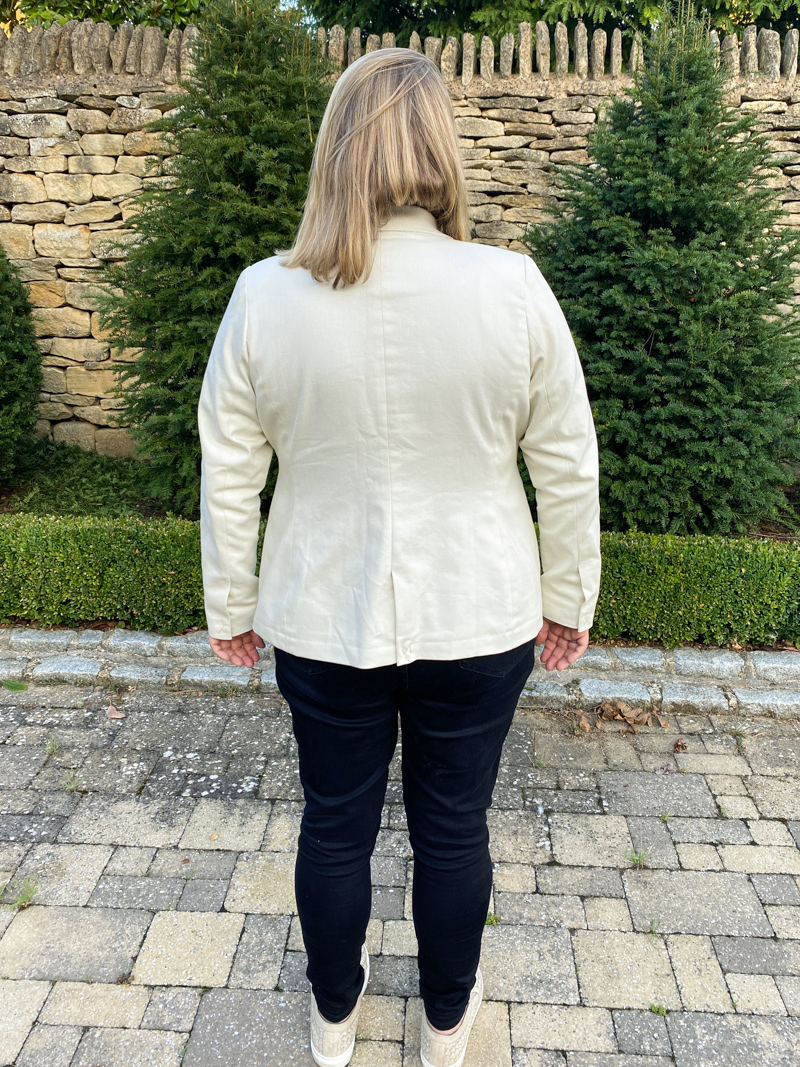 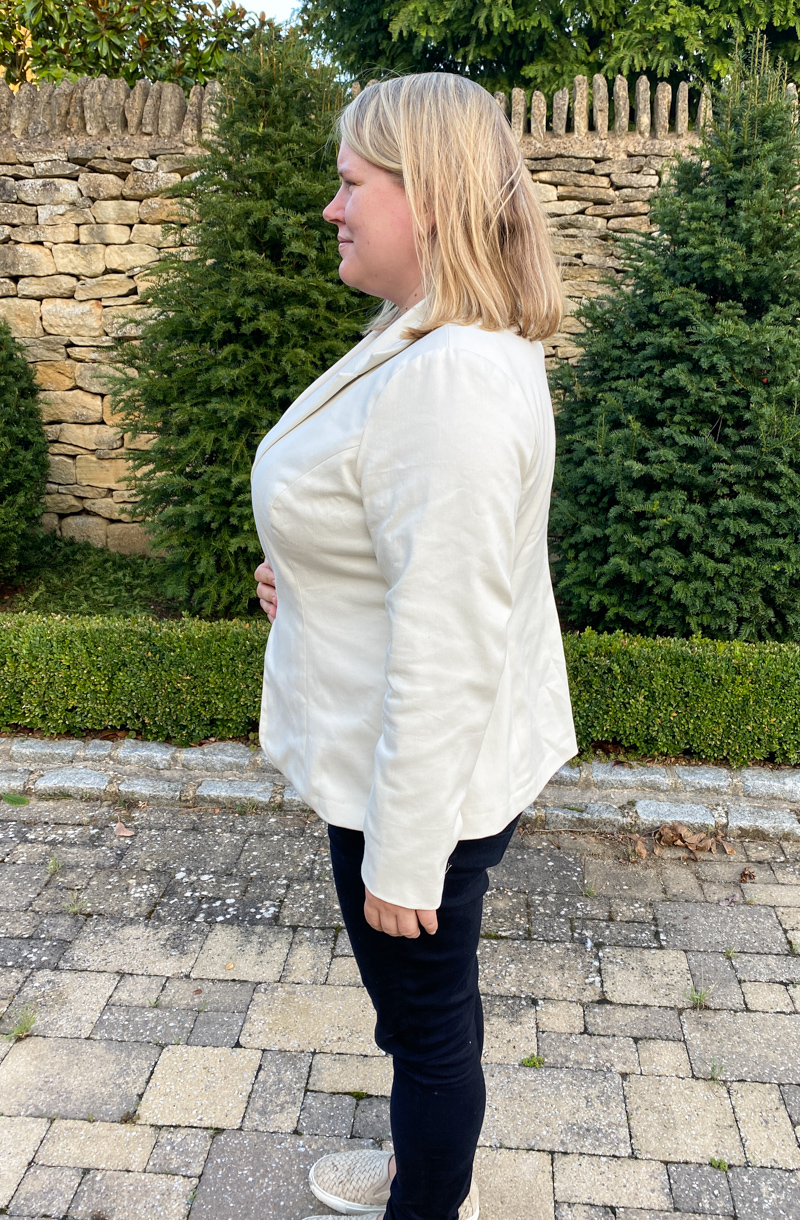 The verdict is: close enough to test the fit.

We’re making a few changes before getting it ready for testing:

The other thing I want to do is check it in a non-stretch woven. Although we’re designing for stretch I think there’s a decent chance it may work in a woven (albeit it will be obviously be more constricting across the back) – and knowing that a big chunk of you wanted a woven blazer, that would increase the appeal of it a lot!

Sign up for our newsletter and you’ll receive exclusive offers, curvy sewing news, and 10% off your next purchase.
END_OF_DOCUMENT_TOKEN_TO_BE_REPLACED