My new year started with a totally new activity: sandal-making! I’ve been keen to branch out into other creative projects, as now I do *so* much sewing for Cashmerette Patterns during the day that I find I want a creative change in the evenings. Last year I did a fun glass-blowing class and started drawing again, and I have a letterpress workshop coming up in a few months I’m looking forward to.

But I’m not sure anything will compare with the intensity that is making your own sandals! It was a totally exhausting, but rewarding experience, and it was fascinating to try a craft which is so close to garment sewing, but different in so many ways. The process was long – eight 6 hour days – that I’m going to split my post into two, and I’ll share the details which lots of people were asking me about on Instagram at the time.

I took the winter session sandal-making class at MassArt,  taught by Malika Green, a Brooklyn-based shoemaker and teacher. It turned out half the students in my class had already taken at least one class with her before, which boded well, and there were a fair few full time MassArt art students in there too, as well as a ceramicist and some other crafty types.

The class teaches how to make “made to measure” sandals, creating your own pattern rather than following another. In some ways this was awesome as there was huge freedom to make whatever you wanted, but on the other hand it was a little overwhelming, and I knew I really wanted to make something I’d wear as opposed to sandals more wacky and artistic. There are some basic considerations: do you want a strap over your whole foot, a little loop for your big toe, or something that goes between your toes like a flip flop? How do you want it to secure to your ankle (if at all)? What shape do you want your straps?

So, I popped over to the Boden website, found these beauties, and I had my inspiration! 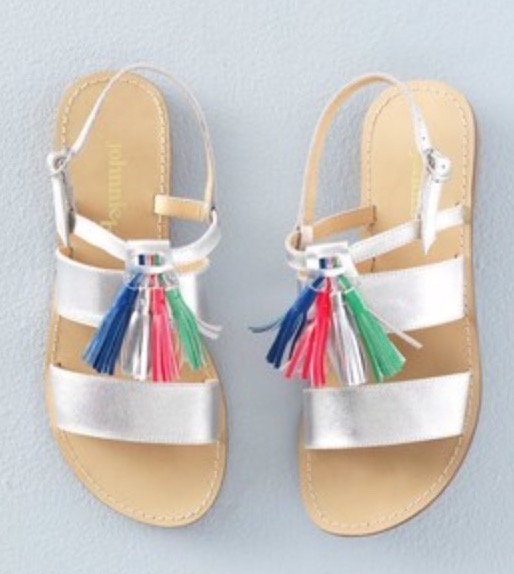 I did some sketches of different combinations of vamp strap (the one over your toes), ankle strap and tassel, and eventually settled on this design after some Instagram polling. I figured it would be fun to have the option to slip different coloured tassels on for different outfits. 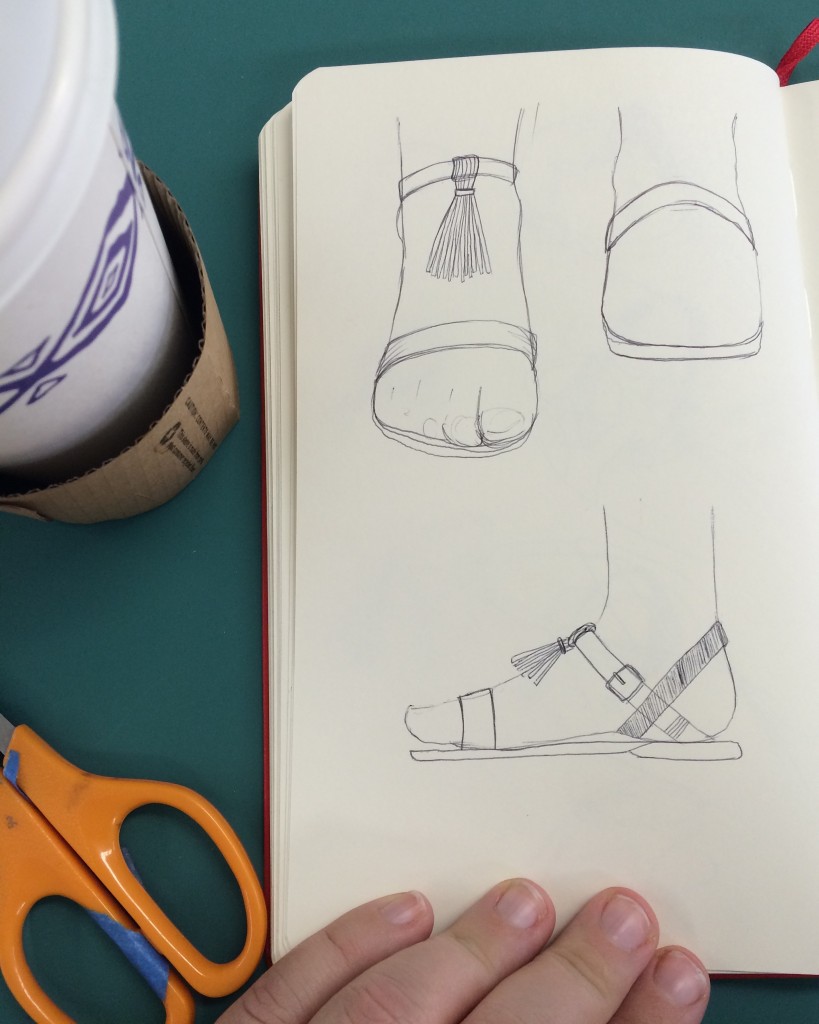 Sketches done, it was on to pattern-making! It began with tracing around our feet, which I’m pretty sure I haven’t done since I was 5. Confirmed: I have different sized and shaped feet. Joy of sandal-making: being able to make asymmetrical sandals that fit each foot perfectly! Then, we drew around our foot outlines to figure out our “midsole” shape (the midsole is the core piece of the sole around which the sandal is constructed – the leather insole goes on top, and the sole goes underneath). 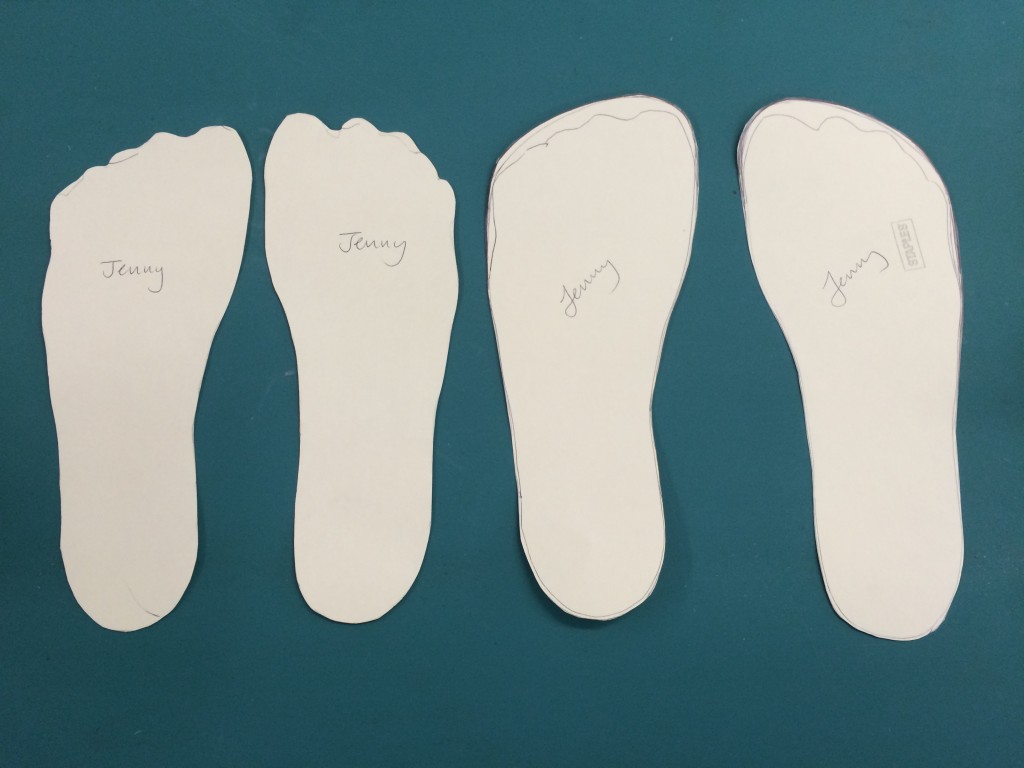 Next came the straps, which was a case of trial and error and lots of masking tape. I think that sewing garments gave me a fairly decent sense of proportion so I started with 1 inch straps, and ended up with 1 inch over my toes, and scaled back the ankle straps to 3/4 inch which curiously looked the same size as the toe strap due to some optical illusion effect. I decided my straps would wrap around the edge of the midsole (rather than being inserted into holes in the sole), which meant I also had to cut little notches out at the side where they would go. We added seam allowances to the edges of the straps, and “lasting allowance” which was for the part of the straps which wraps around and ends up attaching to the underside of the sandal. 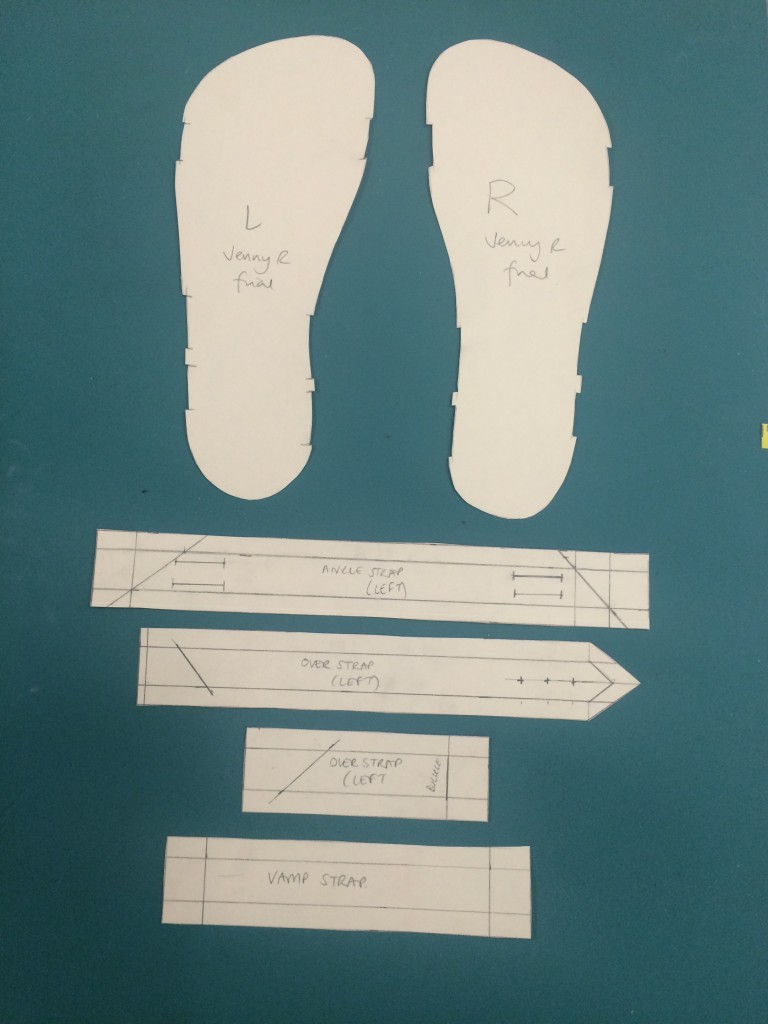 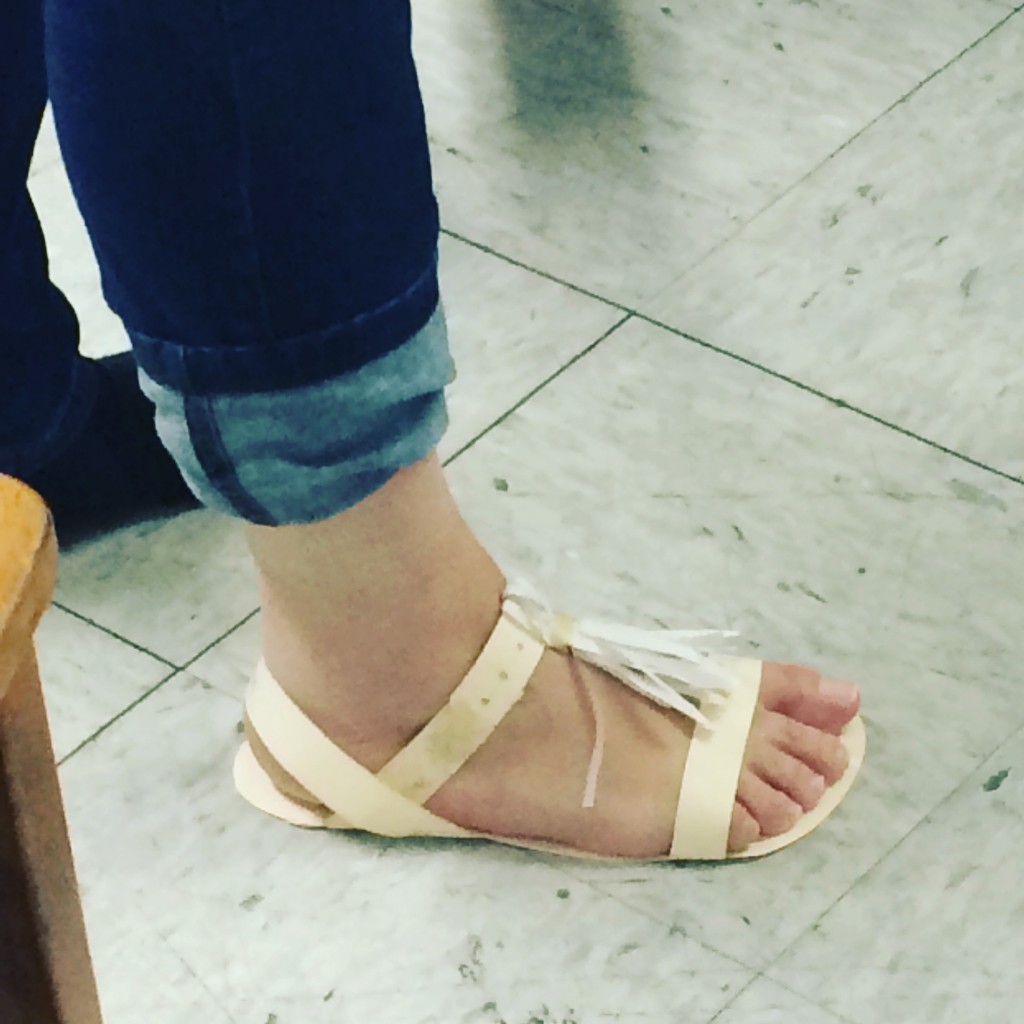 Paper shoe approved, it was on to the leather. Wowsers, working with leather is a lot harder than working with fabric. We cut our midsoles out of a heavy, stiff leather, which was then soaked in water and moulded with our fingers to come up a bit under the toes, arches and heel. The straps were cut out of a thinner veg tan leather. 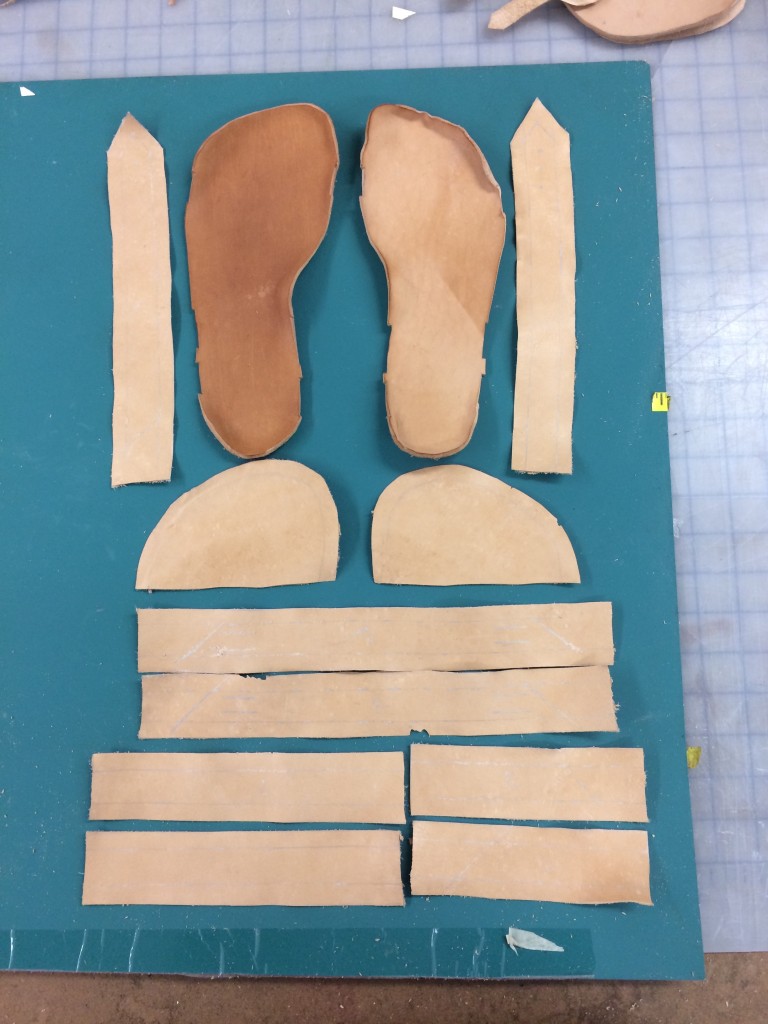 However, it turns out that you can’t just use the leather like that. Oh no, that would be way too easy. The leather pieces have to be significantly thinned in many places – the edges of the toe in-lays, the edges of the straps, and basically everywhere. As I decided to do unstitched straps like leather bias tape, I had to do *tons* of thinning.

To do the thinning, you have to use a skiver, which is a tool which holds a razor blade. You scrape it along the back of the leather and it takes off tiny shavings to thin the leather down. Let’s put it this way: I will not miss skiving. So hard on the fingers! So easy to rip bits in the leather! And you have to press down so hard, with all your upper body weight, that by the end of the day you’re aching and exhausted. Clearly it’s something that one would improve at with time, but it was definitely one of my least favourite bits. 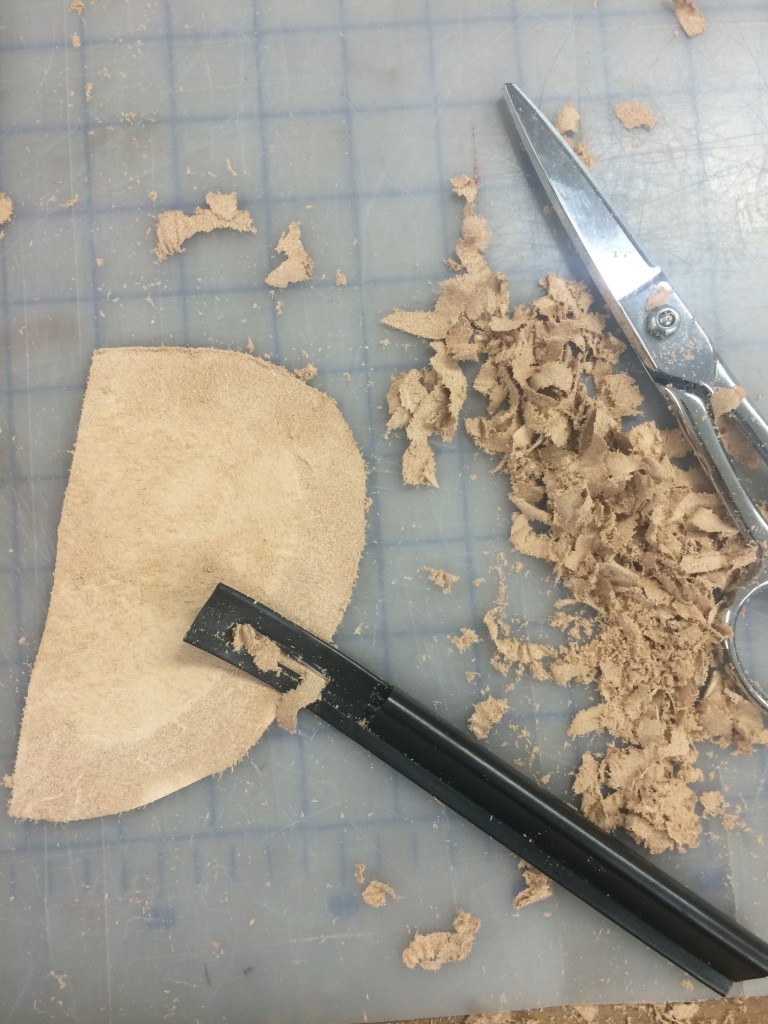 Pieces cut and skived, we then had a dyeing day. We used little daubers to rub water-based dye onto the leather straps, and then had to wait for it to dry before trying multiple layers, or different effects. I was a bit rubbish at this to begin with as I was trying to paint it on, but really it’s more like staining the leather – you just need a little bit, and to keep it as even as possible. However, my decision to go mostly gold helped as it took really well to multiple layers, and you can easily go back in and touch it up if you knick it later (yeah, maybe I did that a few times). In the end, my sandals must have had at least 6 layers of gold dye! 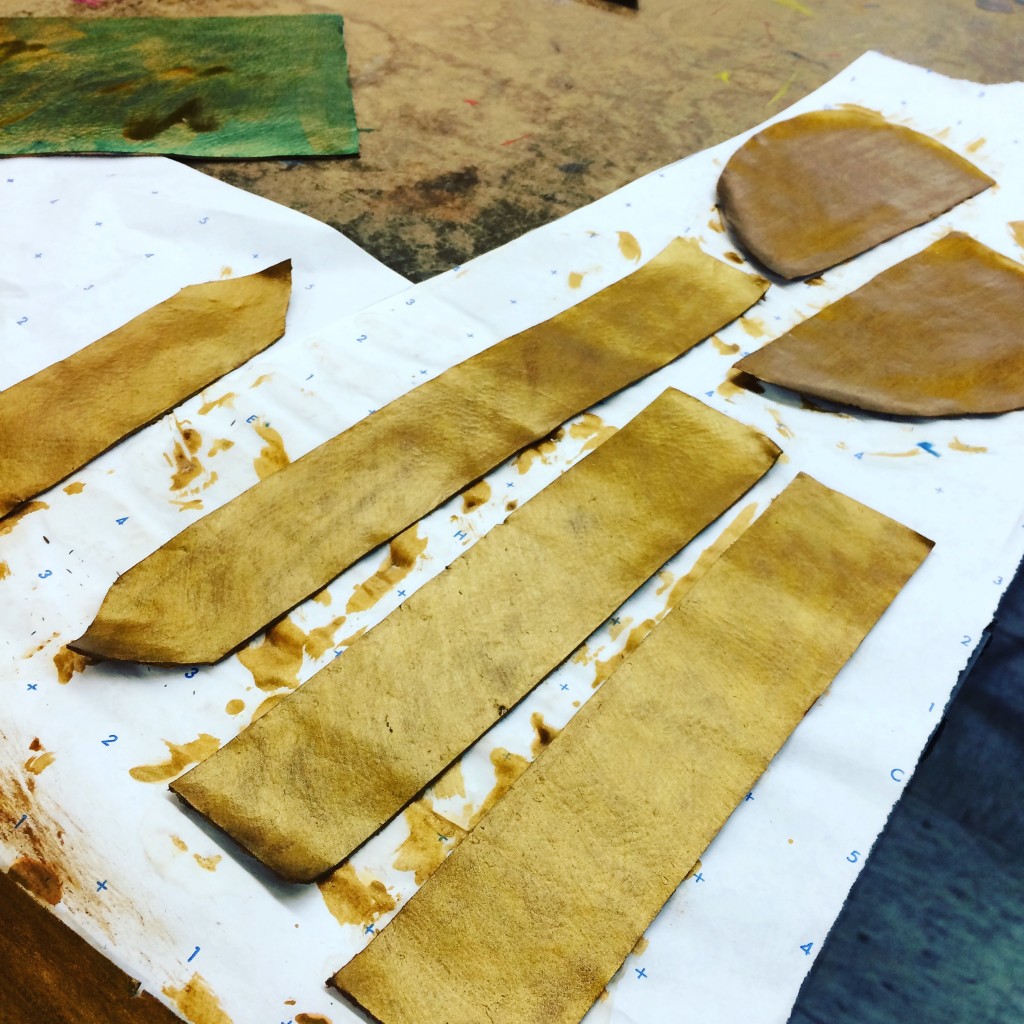 In addition to the main gold straps, I decided to make the back straps a darker brown, which required multiple layers of mahogany dye. For the tassles I experimented with bright pink and blue, but alas the leather turned out to be too thick in the end despite my skiving efforts so I went another route (of which more later!). 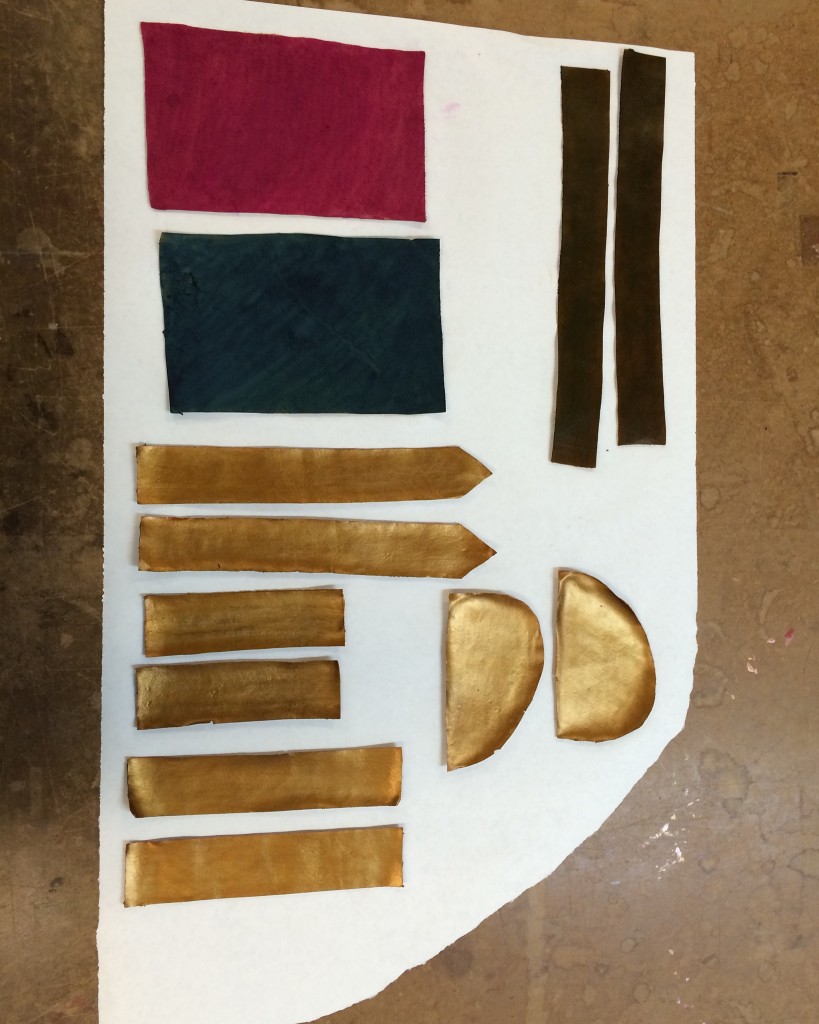 So all that was a solid 4 days work! What can I say: it makes you appreciate shoes, and realise they should probably be a lot more expensive than they are….

Come back soon for more sandal-making adventures as I move onto construction!

Have you ever done a shoe or sandal-making class? Did you continue on making them at home? I haven’t quite decided whether I have the patience to do it or the energy to get the various bits of kit, but once I recover from my exhaustion it’s a distinct possibility!

Sign up for our newsletter and you’ll receive exclusive offers, curvy sewing news, and 10% off your next purchase.
END_OF_DOCUMENT_TOKEN_TO_BE_REPLACED