I am an almost entirely self-taught seamstress. I say almost, because I did take an “intro to sewing” class about 2 years ago when I first bought a machine, but it wasn’t… the best. The teacher seemed to barely know how to thread a machine, and the pace was veeeeery slow (however, I did meet a good friend, so it was totally worth it!). Recently I started to realise that books were only to take me so far, so when BluPrint did a $20 sale on a “Couture Dress” online course with the famous Susan Khalje I thought, why not? I’ll give it a bash. 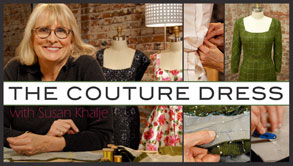 And it’s been amazing! First of all I must say that BluPrint is a really excellent teaching platform. For this course there were about 10 hours of lessons, where Susan takes you step by step through every stage, demonstrating things in real time – there are remarkably few “here’s what I made earlier”. I learned more in the first hour that I’ve probably learned in the past 2 years.  Once you register, you have permanent access to the lessons – so if you want to go back and look at the best way to insert a zipper, it’s right there. Plus, you can ask questions to Susan and astonishingly she actually writes back within 24 hours! Her regular classes are thousands of dollars so it really is an amazing steal.
The class also comes with a ($29.99!) free Vogue dress pattern – but I wasn’t really feeling it. Not least because it’s a fairly fitted formal pattern and it’s 35 degrees celsius right now in Boston. So I decided instead to apply the couture techniques to the new pattern from Colette patterns, the Hazel dress.
It’s a summer dress with a simple gathered skirt but a really unusual bodice: it’s a inverted triangle, and I guess it’s a variation on a princess seam bodice.  Colette recommends making it with stripes, because the sides of the triangle are cut on the bias, which means you get a nice diagonal-stripe effect, alleged to be slimming, but at the least, charming. (For those of you unfamiliar with the concept of bias: all fabric has a “grain” which runs lengthwise through the material – it’s basically the threads that all the others are woven into when the fabric is made. It’s typically the strongest direction of the fabric and most stable (i.e. not stretchy). Most patterns are cut on the grain – it’s really important to be precise, or it ends up draping weirdly. When you cut on the bias, you cut at a 45 degree angle to the grain instead. This gives much more movement to the piece, which can lead to it getting stretched out, but also means that it has a bit more give, so it’s good for waistbands and things like that.) 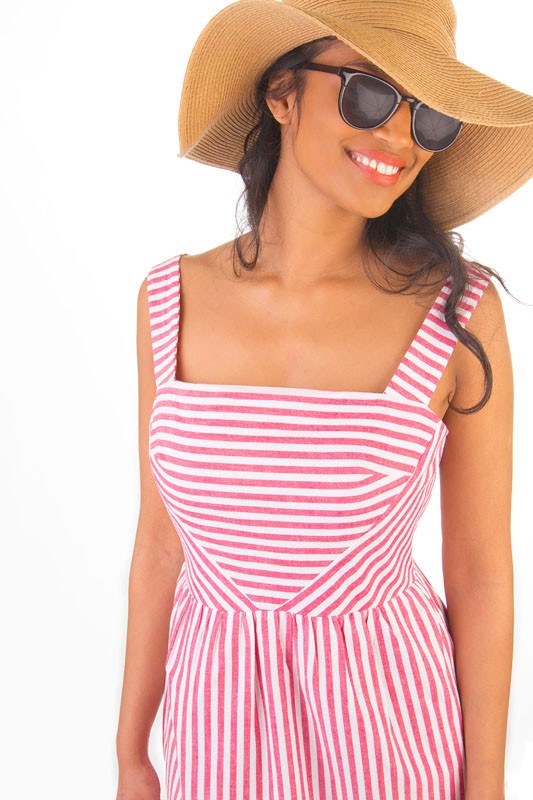 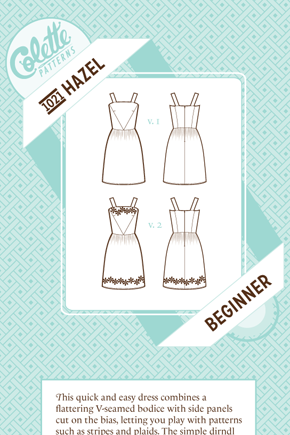 I picked up this gingham on my Goldhawk Road adventure to make myself a Hazel – I figured the gingham would have a  similar effect to the stripes. I”m not entirely sure what it’s made out of, but I think a cotton/poly blend. 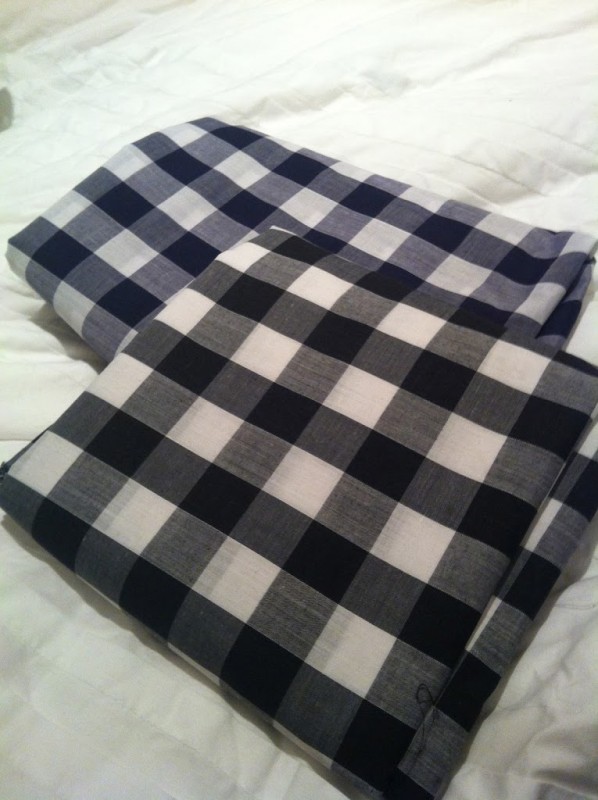 Now, darlings, is when we go couture! Loathed as I would be to attempt to define “couture”, one way of explaining it is that it’s highly crafted clothing made with a lot of attention to detail and a lot of control. Often when you’re sewing commercial patterns there’s quite a lot of guessing as to how the dress is going to come out, because fabric tends to shift as you sew and take out pins and things like that. In couture there’s none of that: everything is done precisely and in a very controlled way so you know exactly what you’re doing.

1. Make a muslin. This is a trial run garment which you do to adjust the pattern to fit your shape and size, and also to have a trial go at putting it together – it’s amazing how much better you are the second time you put together a tricky seam.

This couture class taught me a totally different way to make the muslin, though! Starting with the cutting.

First, you lay out your pattern pieces on the muslin (which is in double thickness, folded very carefully on the grain), and pin them down, making sure to get them exactly on grain. 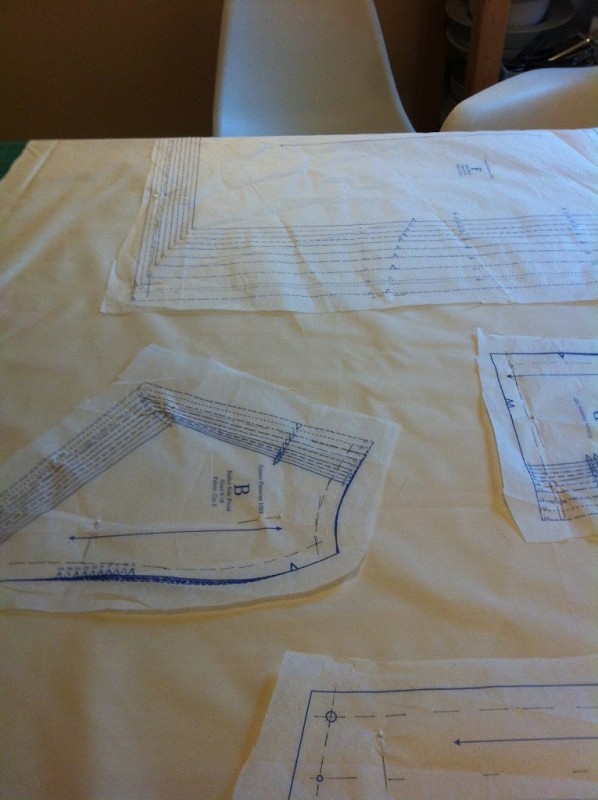 Second, you cut very roughly around the edges, leaving HUGE amounts of space (like 2 – 3 inches) around each piece – this is crucial! 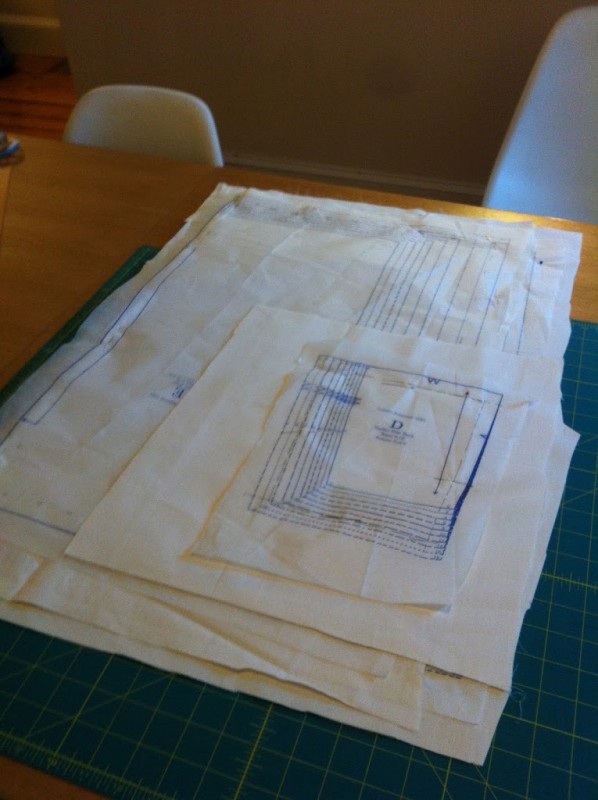 Third: you place these pieces onto a sheet of waxed tracing paper, which is face up, so the order from the bottom is: waxed tracing paper, muslin, pattern. Then you use a tracing wheel (a tool with a small serrated wheel) to run over all the pattern lines – which transfers the wax onto the back of the muslin exactly on the lines.  To transfer onto the other piece of muslin (remember, it’s a double thickness) you pin the two muslin pieces together, take the pattern piece off, flip the whole thing over, and then trace over the wax marks from the other side. This might seem obvious but this is SO MUCH EASIER than what I’ve done in the past….

Notably, you’re marking the STITCHING lines, not the seam allowance. This is a really big difference to “regular” sewing, but makes a lot of sense when it comes to fitting your pattern (as we will see) and I think I’ll always do it this way from now on.

Fourth: you “thread trace” your pieces. This involves sewing a basting (long) stitch on your sewing machine along all the lines. This seems a bit redundant but it is incredibly helpful because 1) you can now see the lines on both sides of the muslin 2) when you are pinning pieces together along seamlines you can *feel* the stitching lines and you don’t have to keep looking. Clever, eh? 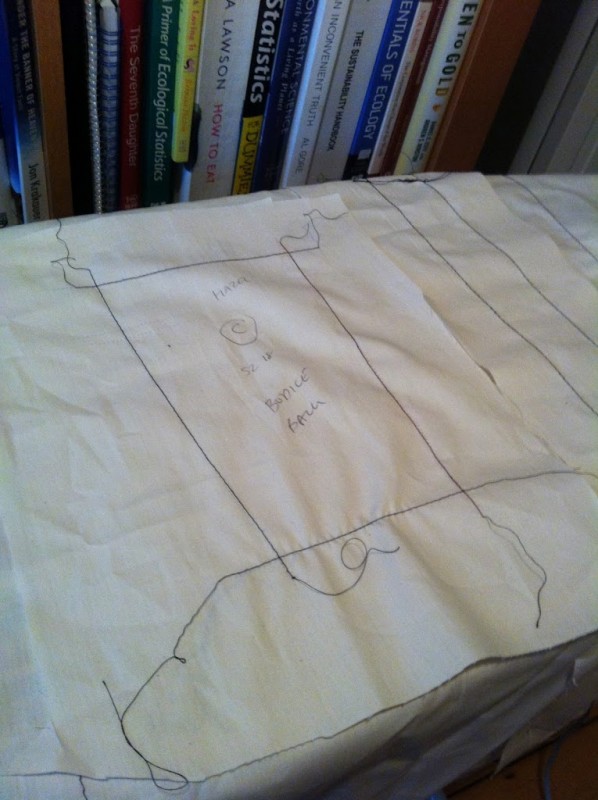 Fifth: without cutting down those crazy seam allowances, you sew it together! And here is a terrible, terrible, terrible picture of my bodice muslin. I know it looks awful – that’s partly because I’m raising one arm to take the photo. But this muslin then went through lots of adjustments – I changed the neckline to *precisely* fit my braline, changed the location and width of the straps, and took in the waist a bit. I didn’t do a muslin for the skirt because it’s pretty straightforward.

And remember those huge seam allowances? Well they mean that if an area is too *small* for you, you can now let out some fabric – e.g. you could make the side seams another inch apart if the waist was too small, and you would still have fabric to do it with, rather than having to patch in fabric! This makes SO MUCH SENSE. I have re-made muslins in the past just to make them slightly bigger…. 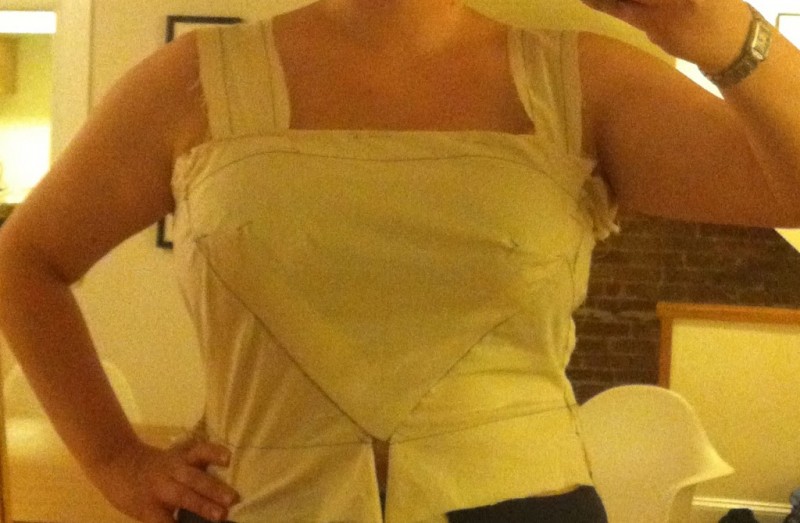 Here you can see three lines at the top of the side pattern piece – the bottom one is the original pattern line, then there are two lines showing me adjusting the piece – I ended up going with the top one. Surprisingly, I didn’t need to do an FBA (Full Bust Adjustement) on this pattern, but the raising of the neckline was effectively the compensation for my, er, quirks. 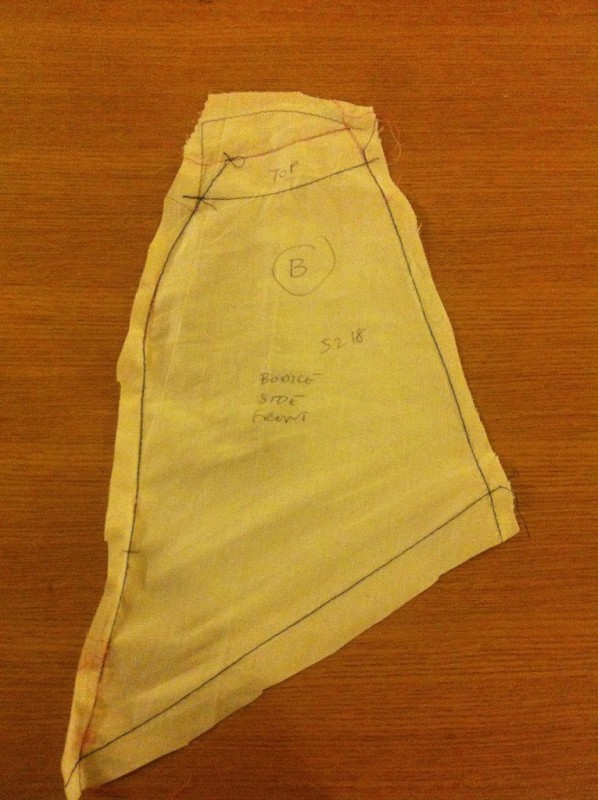 And here is the triangle bodice piece – again with a new neckline, which I have since made into more of a scoop. 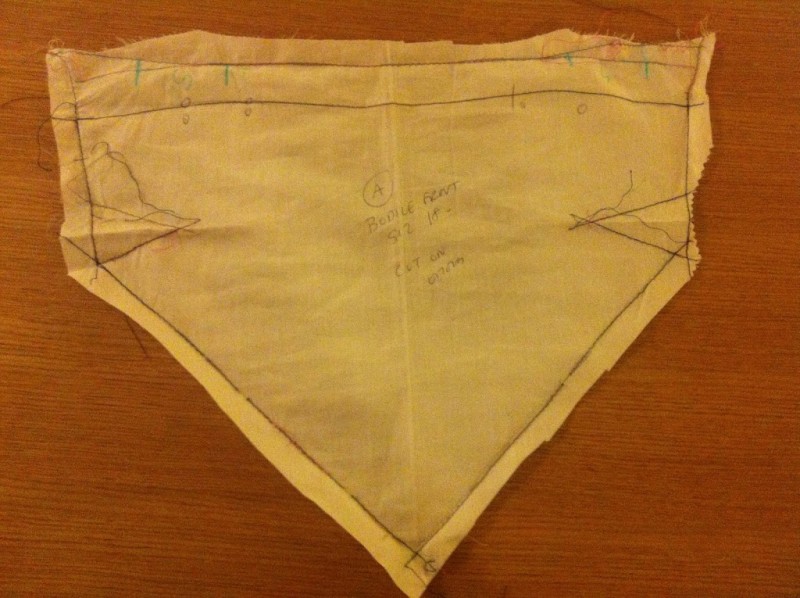 Come back soon to see the next stages!

**This post was updated 10 Jan 19 to reflect the change of Craftsy to BluPrint.

Sign up for our newsletter and you’ll receive exclusive offers, curvy sewing news, and 10% off your next purchase.
END_OF_DOCUMENT_TOKEN_TO_BE_REPLACED