Taking accurate measurements of your body is crucial when you’re picking which size of sewing pattern to use – get it wrong, and there’s a really high chance your garment won’t fit! I always recommend taking measurements before every project – it only takes a minute, and you’ll be surprised by how often you fluctuate. Make sure you wear the same bra that you’ll be wearing in the final garment, and also sit down for the waist and hip measurements because if you’re curvy, you likely spread out a little bit when you’re sitting, and you need to be able to still wear the garment comfortably when you’re on the couch. 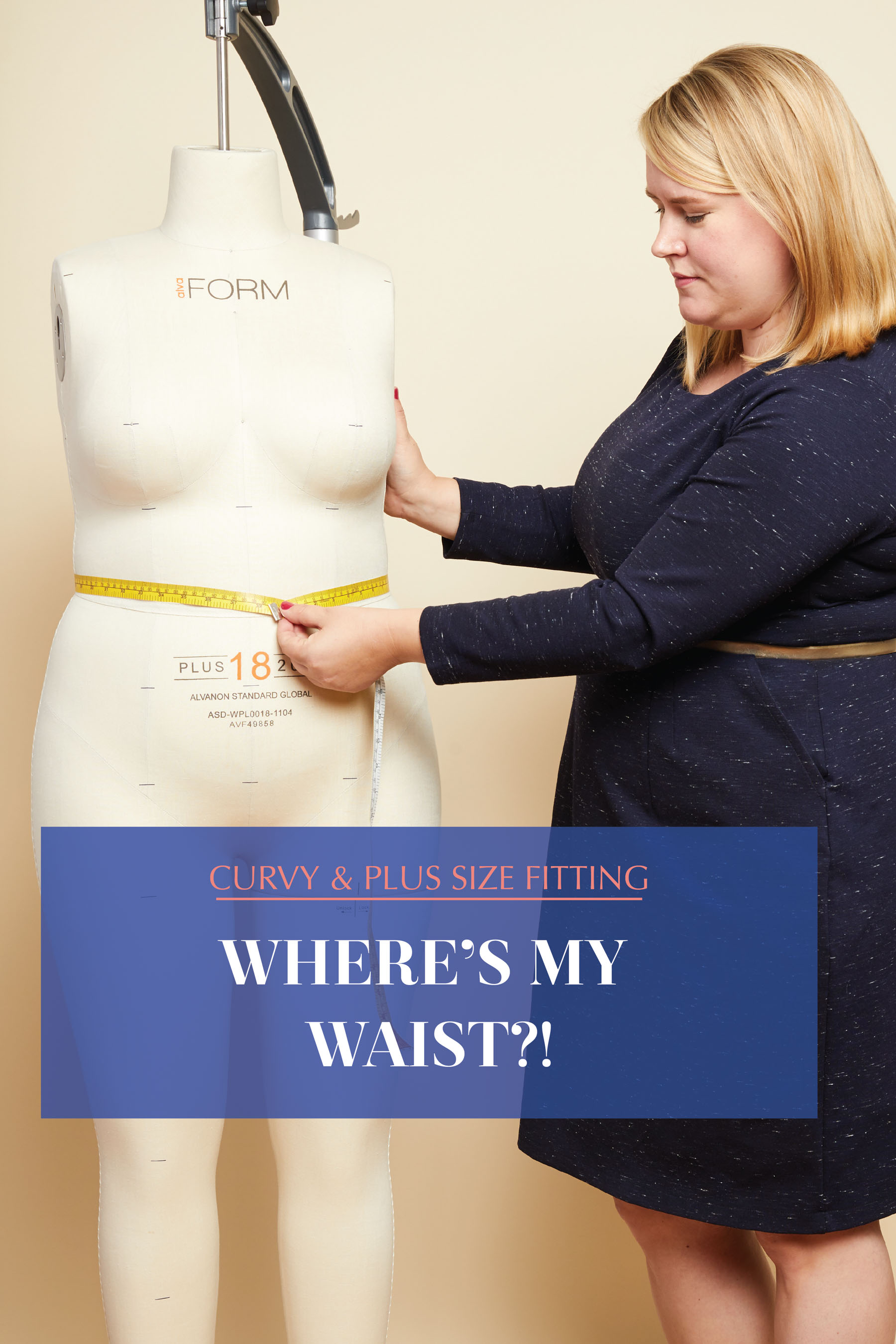 But what do you do if you’re not sure WHERE to take the measurement? The bust and hip are fairly easy: take them where you’re biggest. For the bust specifically, measure at your apex, which is the most protruding part – bear in mind, it may not be your nipple! (especially if you’re bountiful of bust). For hips, it’s best to take wherever your hip/bum circumference is biggest, which might be higher or lower depending on your proportions (and you may have to alter the pattern for that – but that’s a post for a another day).

However, figuring out how to find and measure your waist for sewing can be harder – especially if you’re plus size, and/or not an hourglass shape with an obviously defined waist. I think many people assume there’s a “correct” waist location, and somehow you have to find it, but in fact, in my opinion, that’s not true!

There’s lots of guidance about this topic, and I have to admit that I have a different opinion than a lot of the standard advice you’ll find in fitting books which are intended for women of all sizes, but predominantly written for slim and classically regular figures. My approach is based on years of designing and fitting for plus size bodies, and it’s worked well for me, and for the women in classes I’ve taught. But as always, there aren’t many absolutes in sewing, so see what you think – and if there’s a different approach that works for you, use that!

Here’s what you need to know about the Cashmerette approach…

1. There isn’t an absolute rule

You may have read that your waist is always where you angle when you bend over, or at the height of your belly button, or where your hips start going out, or X inches above your belly button. But here’s the secret: there is in fact no absolute rule.

We all have such different proportions and dimensions that there isn’t a one size fits all approach. Personally when I lean over I’m more of a bumpy curve than a sharp angle with a defined waist! So, the question is less “where is my waist?” than  “where do I want the intended waist on my garment to hit me?”. Don’t worry about finding the “true” location of your waist – in reality, there isn’t one, and it doesn’t matter when you’re sewing anyway because you’re going to be altering your pattern accordingly.

2. If you want to look smaller, choose your narrowest point – which is likely high up if you’re plus size.

Now we know that your waist is wherever you want it to be for the purpose of sewing garments, you have a choice. IF you want to look smaller (and of course, you don’t have to!), the best bet is to pick your narrowest point, which in my experience is usually around mid-rib cage on most women – which is much higher than typically taught. For me, it’s about 4 inches below my bra band.

As it happens, the croquis in our Curvy Sketchbooks is based on me (SURPRISE!) so you can easily see here that I’m narrowest high up (belly button added to the image for proportion! It’s not in the sketchbook ;)). I included the belly button comparison because that’s a place a lot of women automatically go to measure, but it’s almost always too far down. 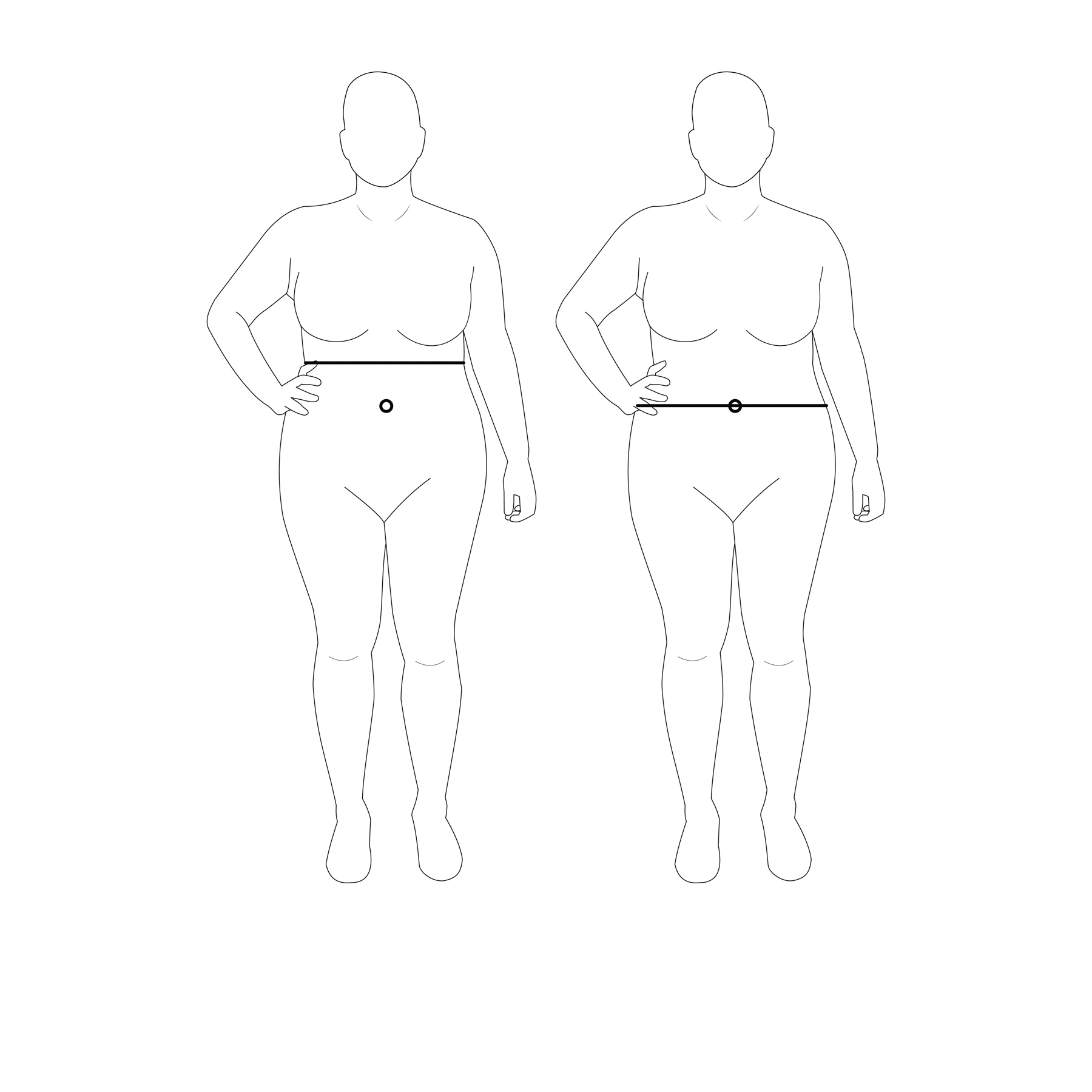 Here’s where that lies on me: 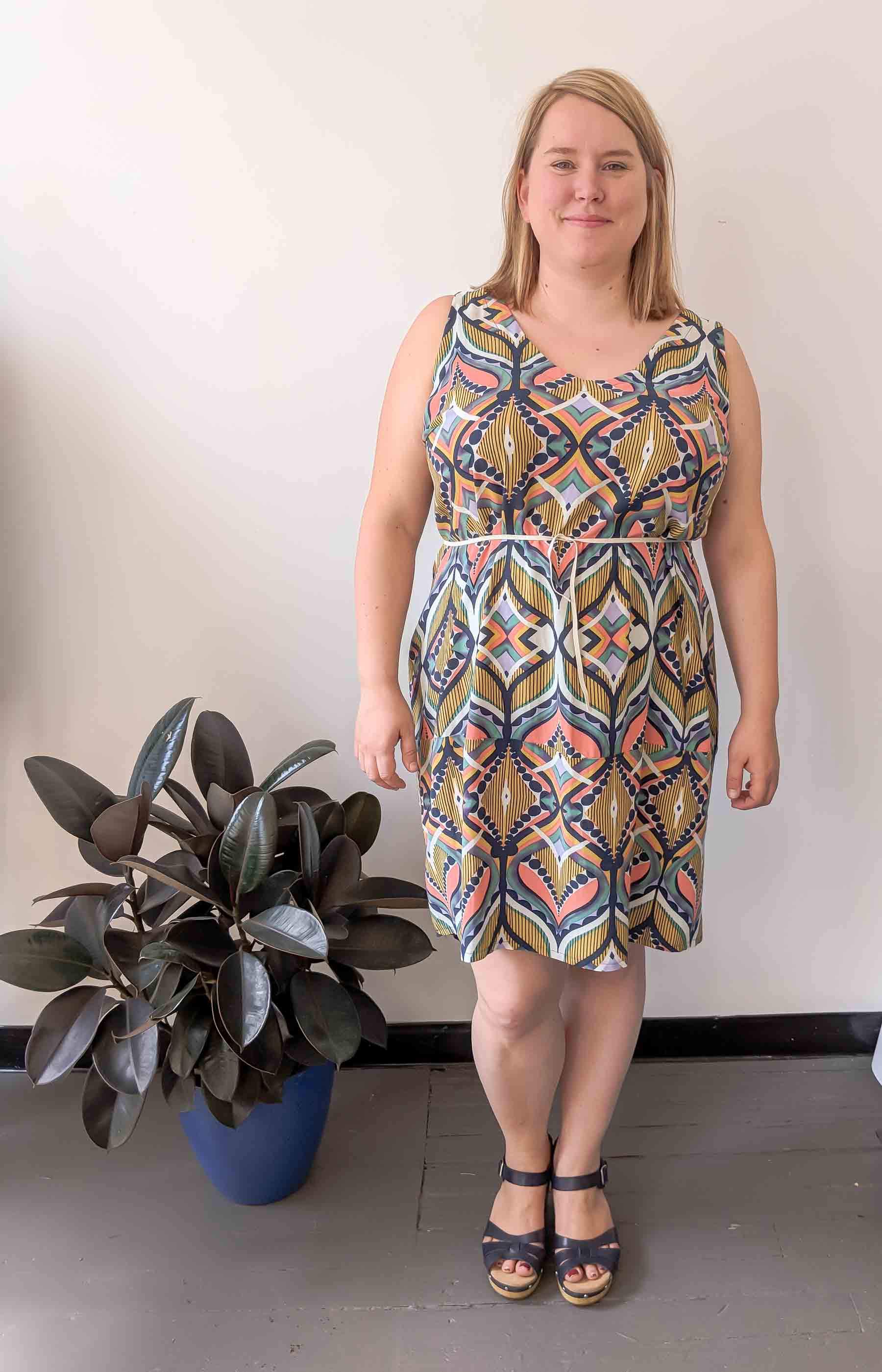 And, you can see how different I look if I go with the “traditional” waist height (RUH ROH). Much less good on me. 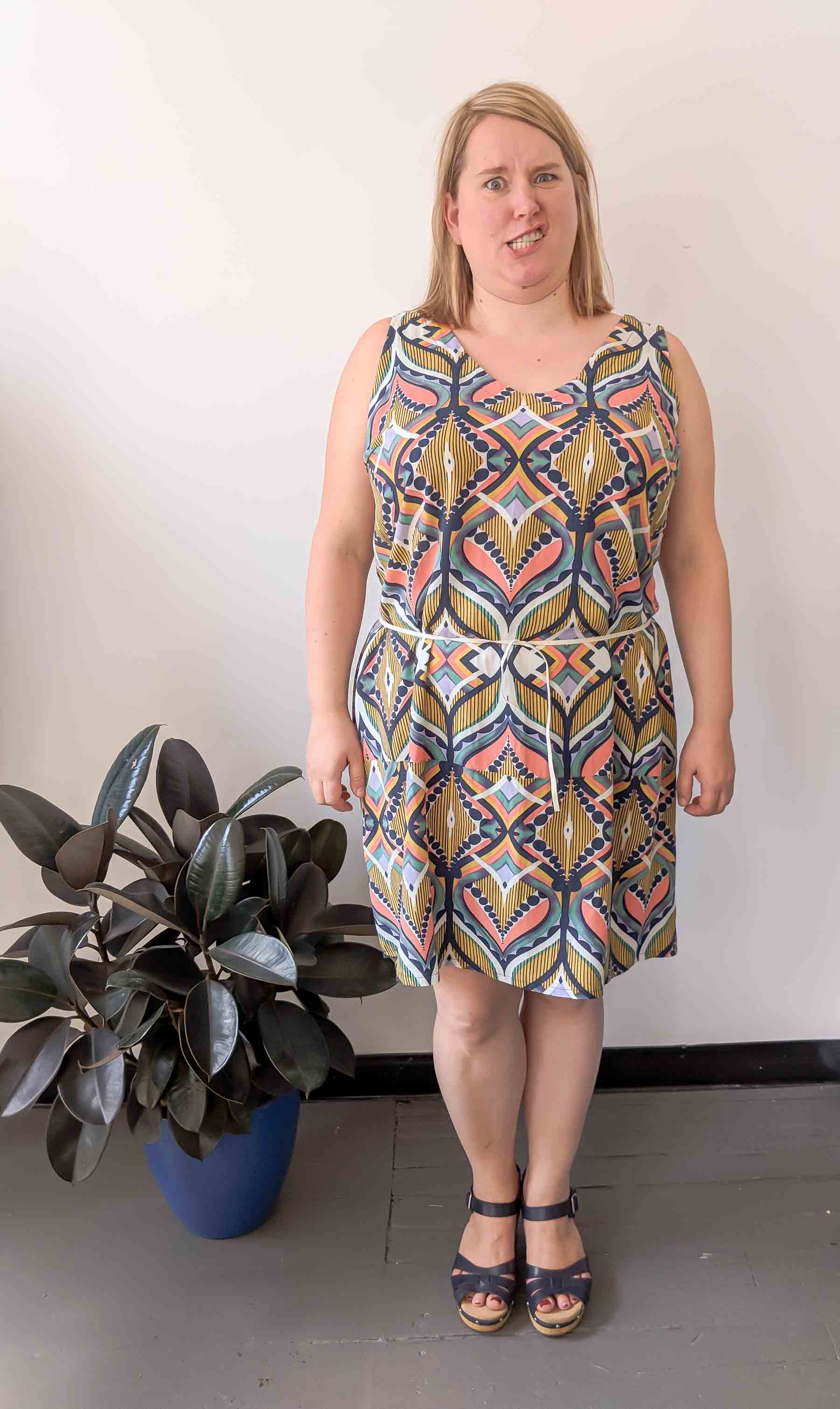 As this is a really common narrowest point, it’s also why most Cashmerette Patterns have a “high” waist! I often hear from women who lengthen our bodices, only to realize that it actually looks much better at the original, higher waist placement!

Let’s look at some other common body shapes: 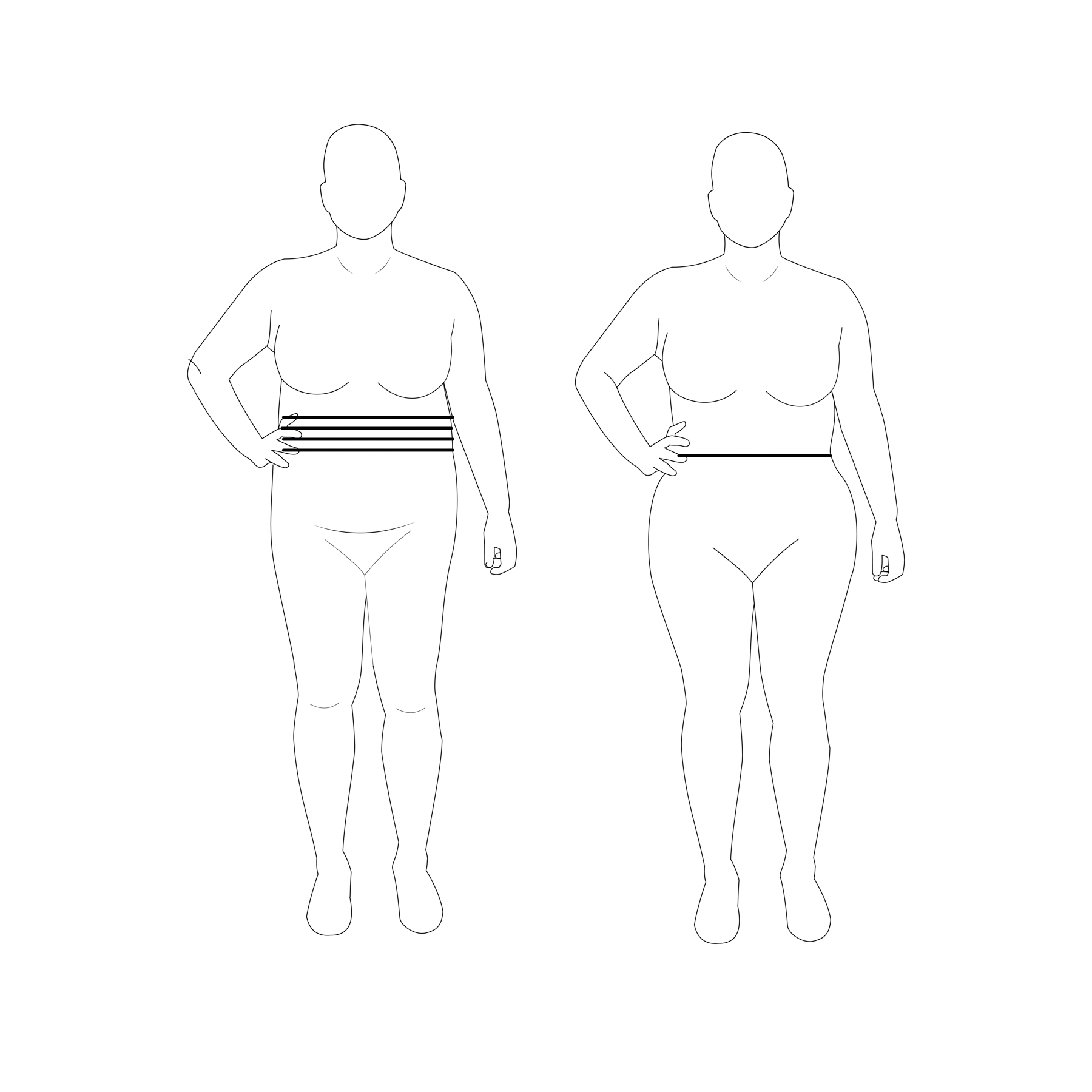 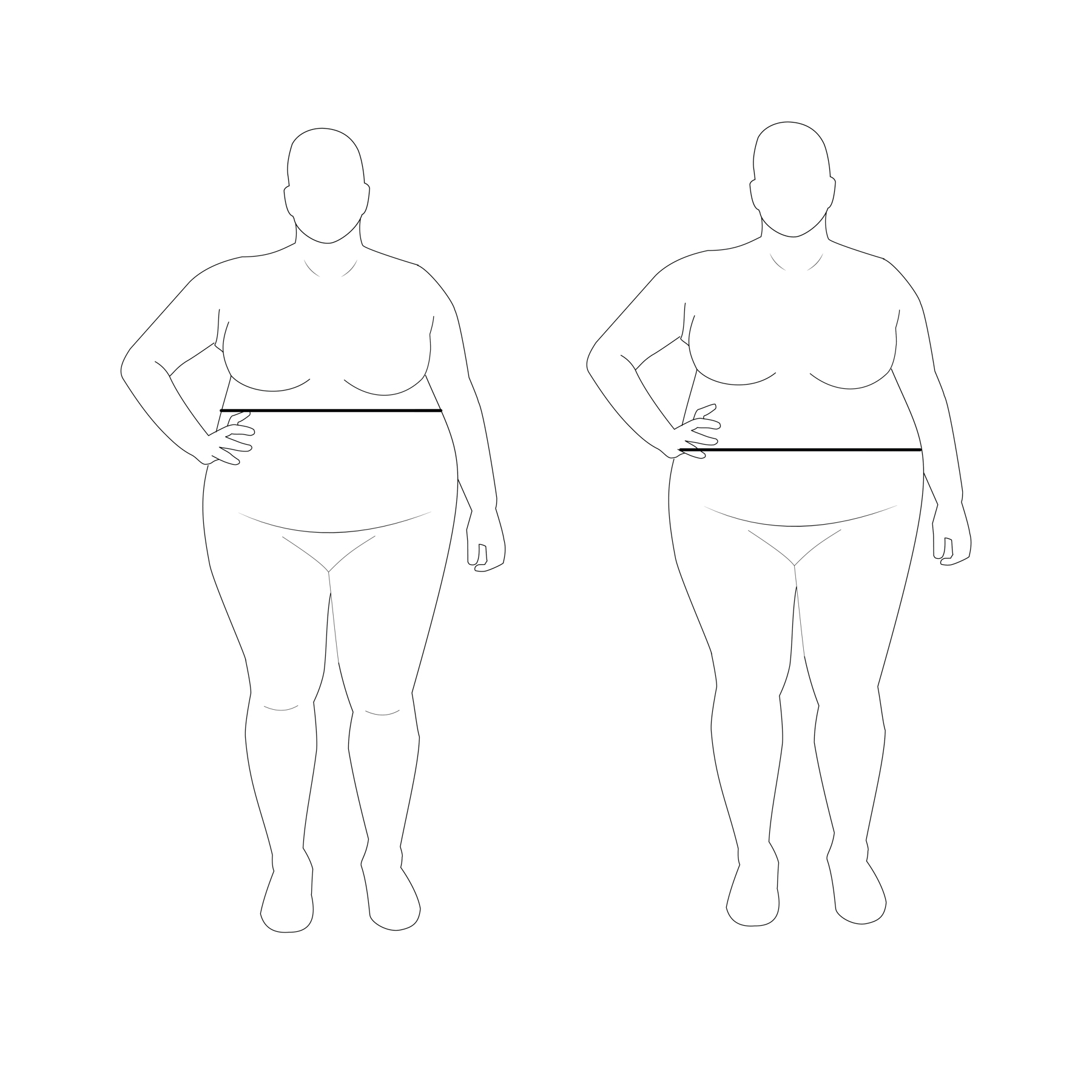 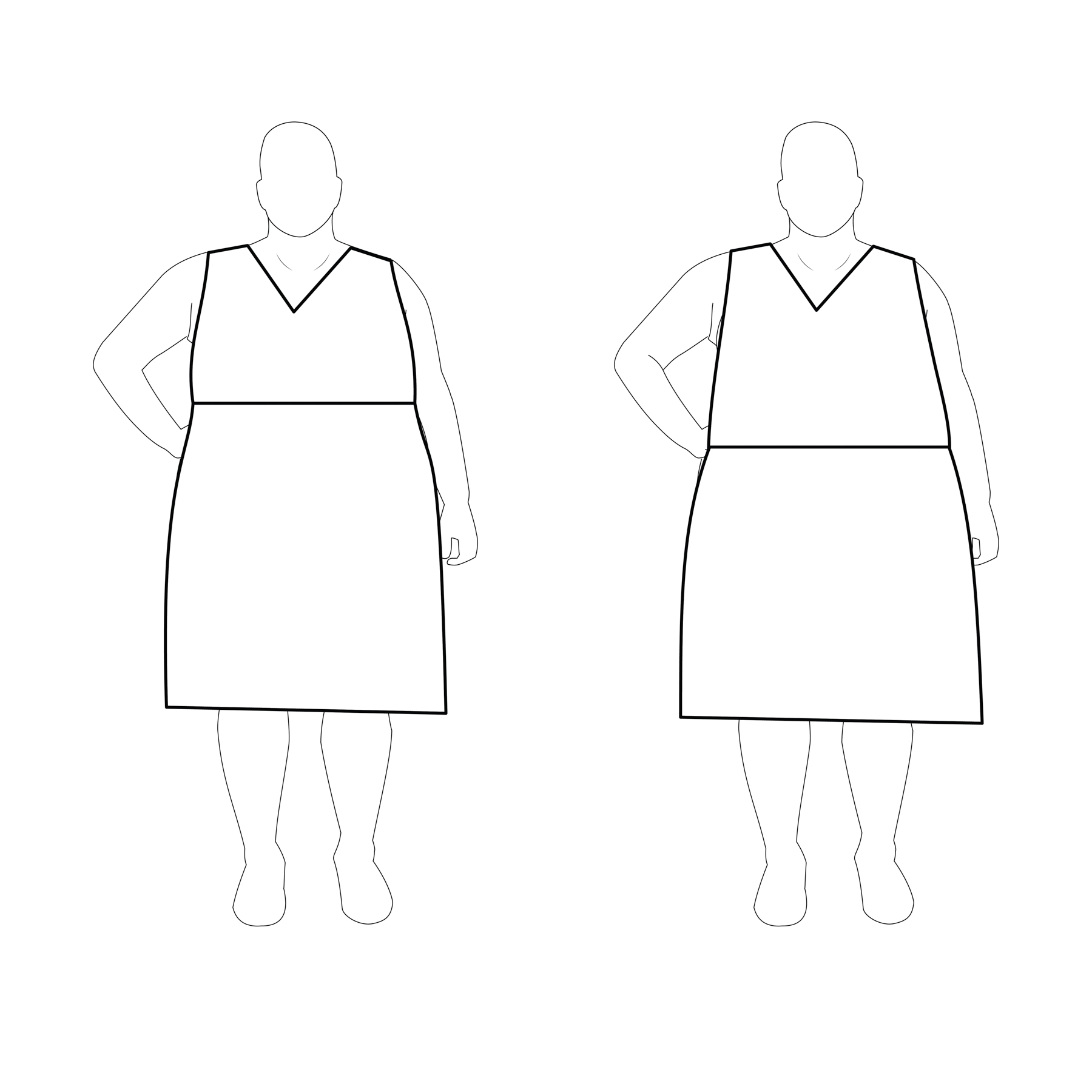 Here’s the comparison on the Appleton Dress on me: 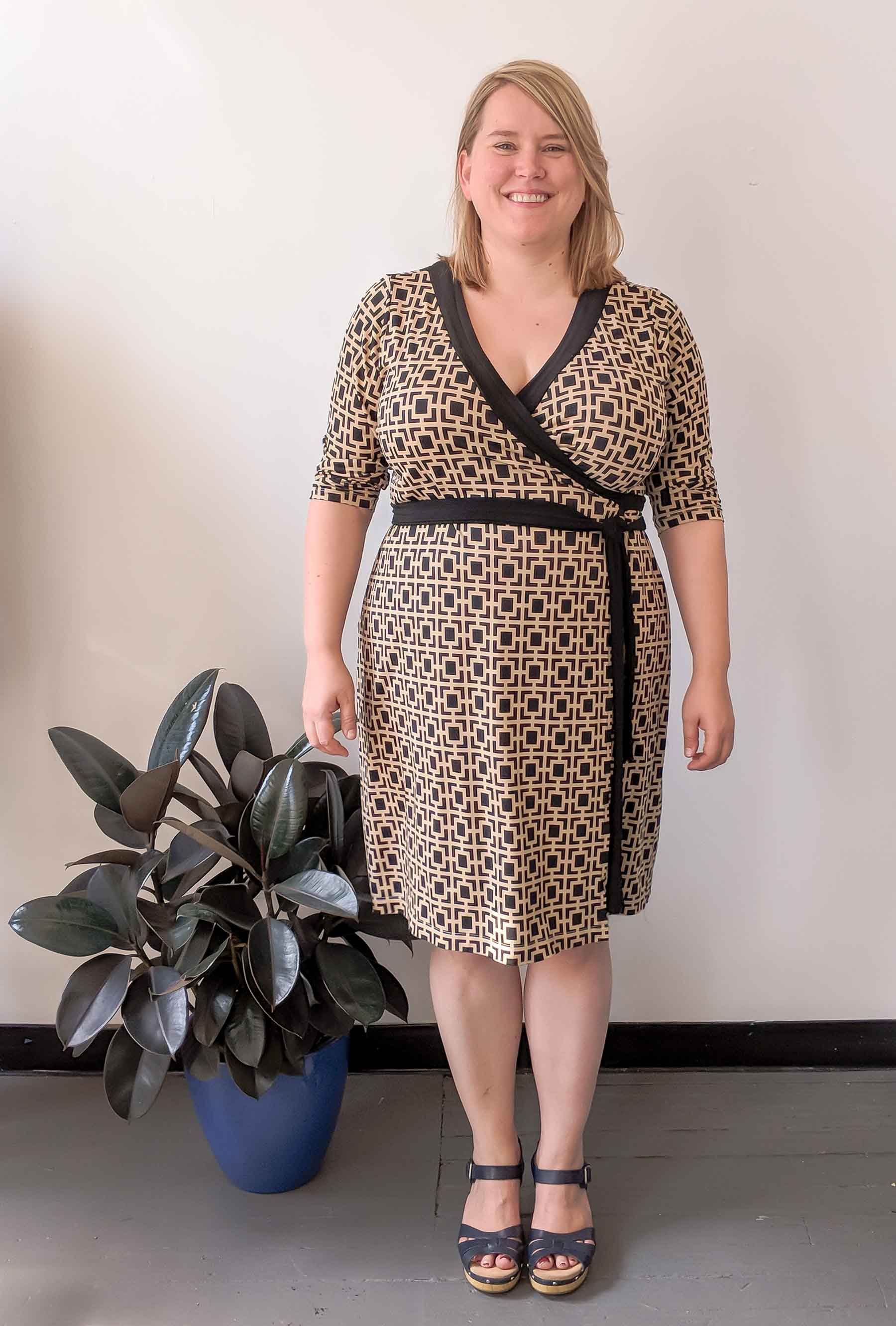 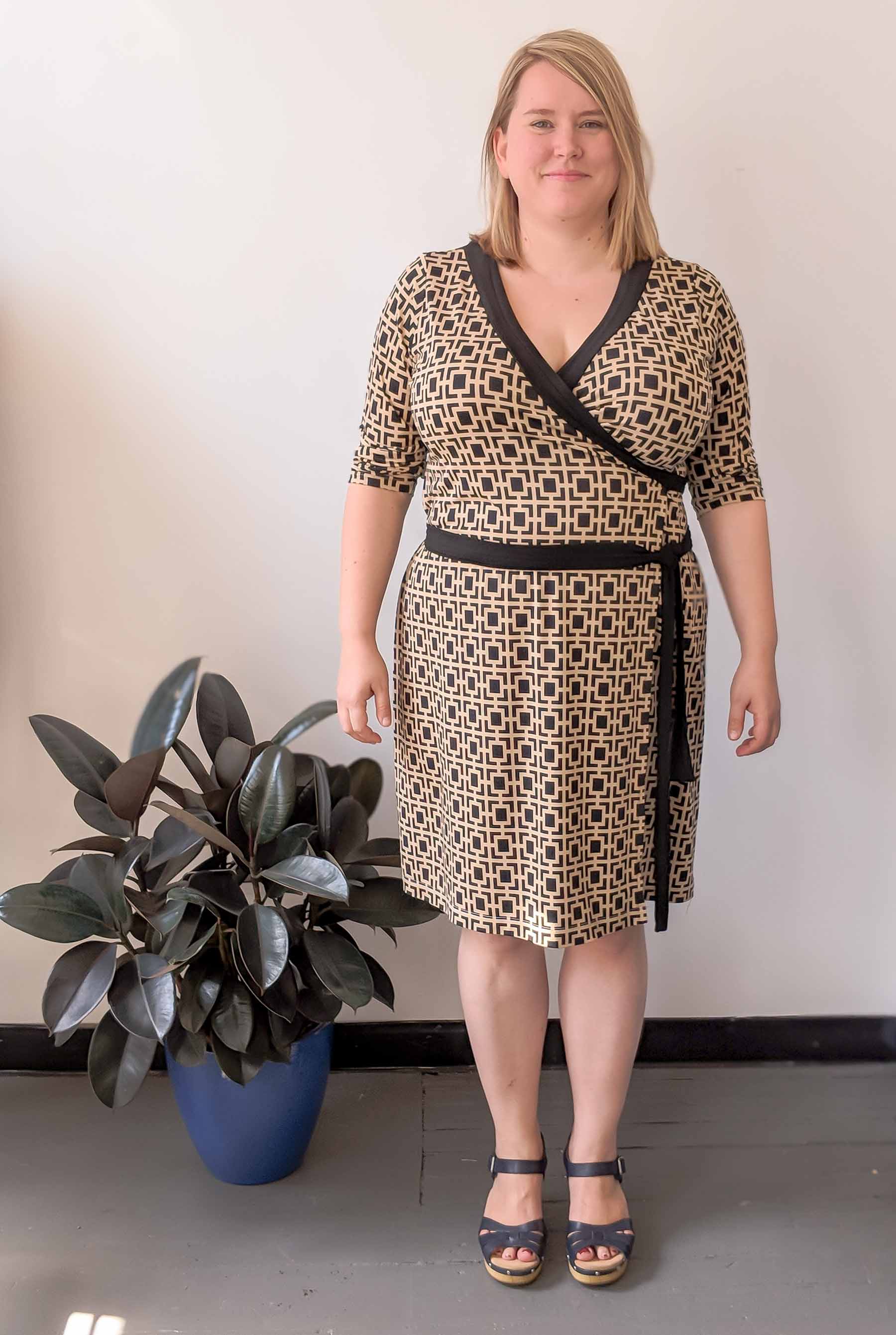 Finally, another benefit of a high waist is that it often helps skirts fall straight down and skim your tummy, unlike a lower waist where you tend to protrude out much more quickly.

3. If you’re making a non-fitted skirt, you can choose to put the waist wherever you want, and just alter the length of the skirt accordingly.

For skirts, picking your waist is really just picking where you want the skirt to start on your body. The only thing you need to bear in mind is if you’re wearing it a few inches higher than the designer intended, you might have to lengthen it then to restore the original hem length. You can observe again how much better a higher waist looks here, proportionally: 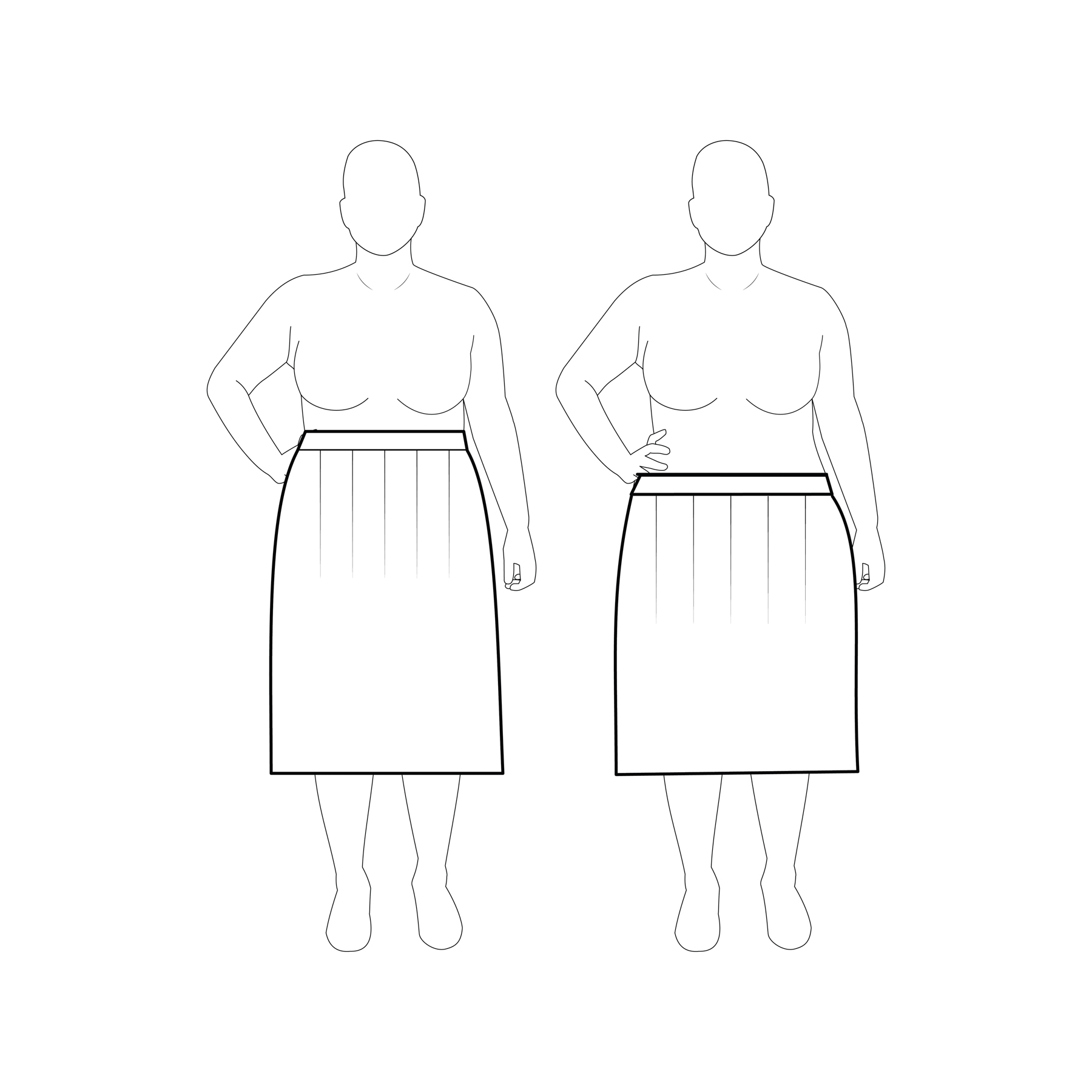 4. If you’re making a dress, fitted garment, or something with a waistline seam, you may need to alter the height of the waist on the garment after you decide where you want your waist location to be.

Unlike with skirts, dresses or other garments with a waistline seam will have to be altered, depending on the location of your waist.

First of all, bear in mind this can be true of anyone, regardless! Just because the designer thinks your waist is X inches from your shoulder, doesn’t mean many people actually have that proportion.

Second, it’s usually a pretty easy alteration, especially if the designer has lengthen/shorten lines (which we do on all Cashmerette Patterns!). If you need to raise a waistline, you’re going to cut at that line, overlap the pieces until you’ve eliminated the length you want, then tape them back together, and true the sides (make them smooth again). To length, do the same, but spread the pieces apart and fill in with tissue. Again, bear in mind that moving the waistline will change the bottom portion of the garment too, so you may need to shorten or lengthen the bottom accordingly.

Here’s what moving the waist down on the Rivermont Dress looks like – you’d have to lengthen the bodice and shorten the skirt: 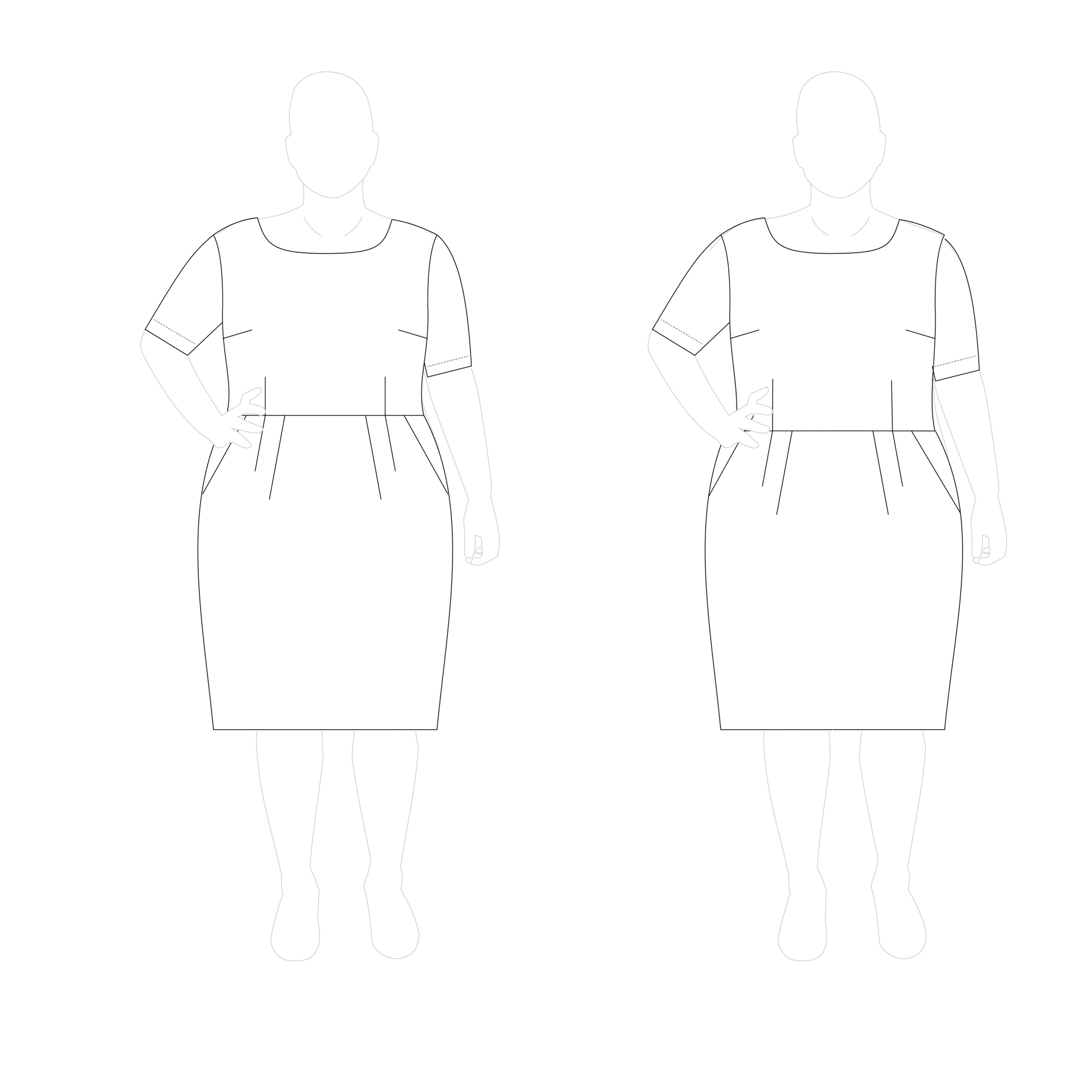 I hope this was a helpful post on how to find your waist! Are there any other measuring or fitting topics you’d like me to cover here on the blog?

60 thoughts on “Where is my waist?! How to find & measure your waist for sewing”

Sign up for our newsletter and you’ll receive exclusive offers, curvy sewing news, and 10% off your next purchase.
END_OF_DOCUMENT_TOKEN_TO_BE_REPLACED