Any guesses? Yes, that wise woman was me. I’m not sure why after 6 years of sewing and quitting my day job to focus on it full time I still have categories in my head of “thing I can sew”  – that now includes jeans and swimsuits – and “things I can’t”. It makes no sense! And yet, until recently, the prospect of sewing a bra seemed ludicrous. Part of it was undoubtedly my not insignificant bra needs. Unlike clothing, which mostly just has to encapsulate you and hang on the right bits, bras actually have engineering work to do. And in the case of my Mighty Bosom, pretty advanced level engineering at that. Probably PhD structural engineering at MIT, let’s be honest.

And yet, bras are just sewn garments, with an added metal bit in them. So, when Norma at Orange Lingerie let me know, over one of our regular tasty dinners out in Boston, that she’d be expanding her size range to go up to a J, I knew that my excuses had run out. And when Norma then asked if I’d be the fit model for the 38H, I was officially on board!

First up, Norma developed the Marlborough bra extended sizes, and I spent some amusing evenings standing in restaurant bathrooms in the greater Boston area trying on samples. So, I decided to tackle it first, too. 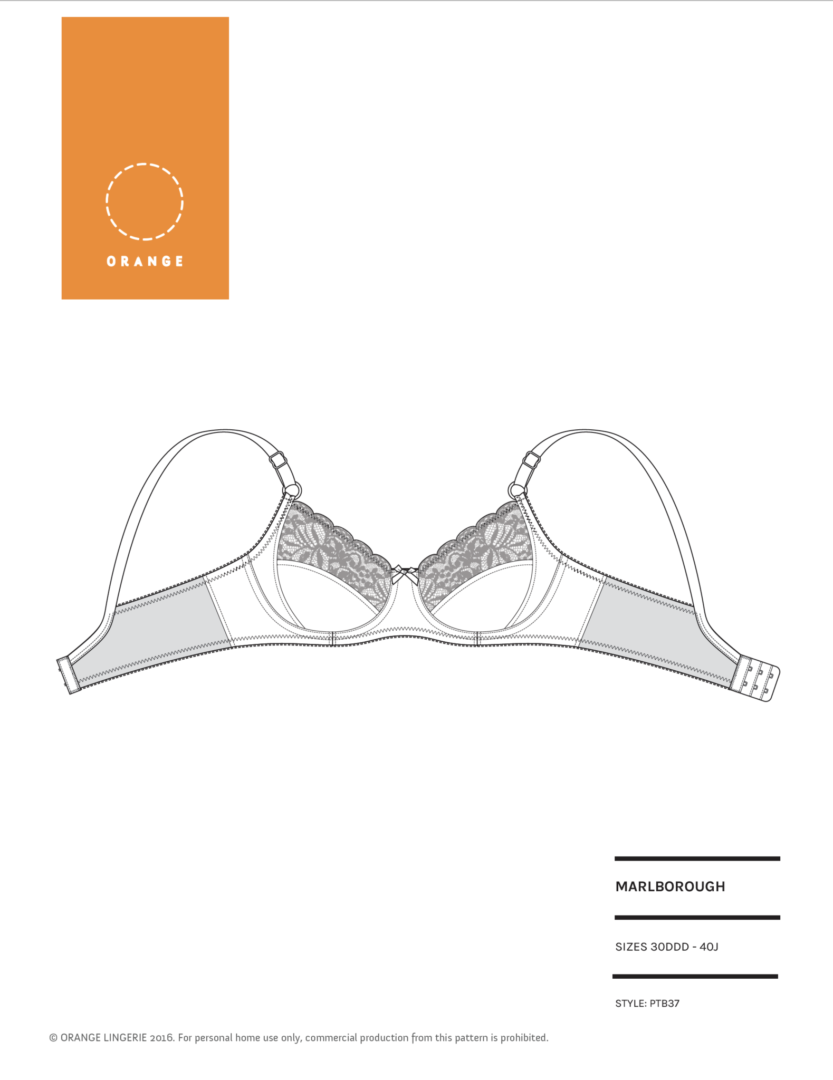 There are two big things to learn when you start sewing bras: construction and fit. I decided to focus on construction first, especially as being the fit model would probably minimize the fit issues (HA! more on that later).

Anyhow, when you’re trying to sew something brand new, I think the “first pancake” philosophy is a good one to go with: the first bra/pancake is going to be tossed in the bin, and that’s OK. It’s best to just give it a go and see how far you’ll make it – and learn lots for next time.

So, here’s my first pancake bra. Not too bad, eh! 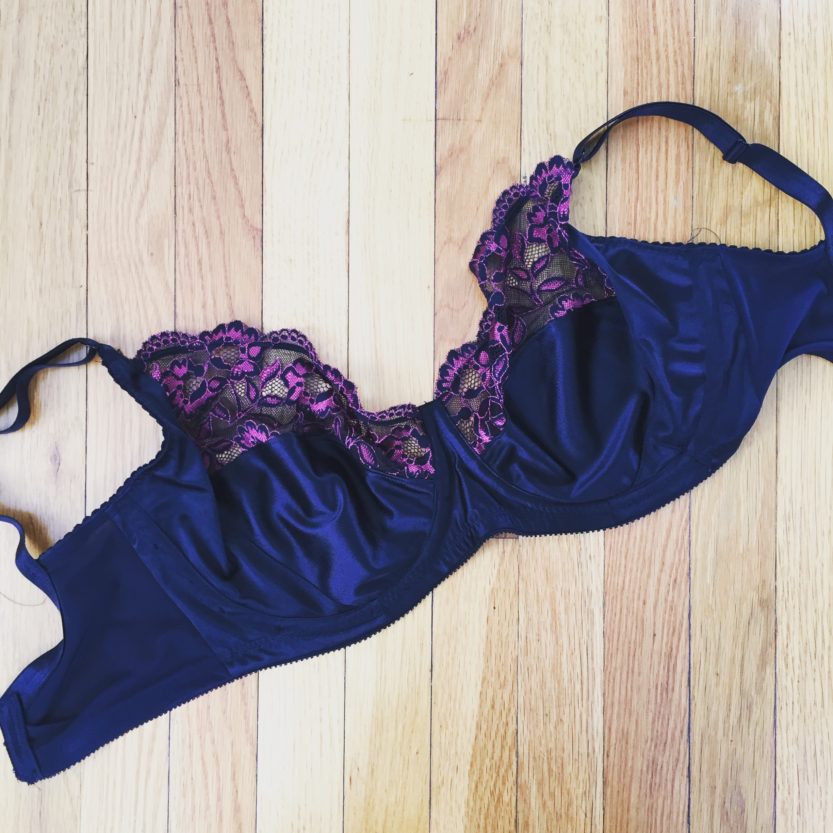 OK, so it *looks* pretty good. But trust me, it’s not awesome. I used a kit from Bra Makers Supply but unfortunately the lace was quite shoddy – it has very fragile areas where it is extremely easy to poke holes during the construction process. Hence, this bra is full of holes (and not just the lace ones that are meant to be there, smartypants). Second, when I tried it on, it really flattened the bottom half of my bust, rather than being rounded which is the shape I prefer under my clothes. Quite why it had this effect when none of Norma’s samples did, I know not. Such is the Mystery Of Bras.

Anyhow, undeterred I galloped on to a second version. Having received some wise counsel from Norma on the flat underboob situation, I added in a vertical seam on the bottom half of the cup – here’s a tutorial on how to do that.

The good news is, that helped a lot with shape – it still isn’t *quite* as rounded as the RTW bras I get from Bravissimo, but totally workable. 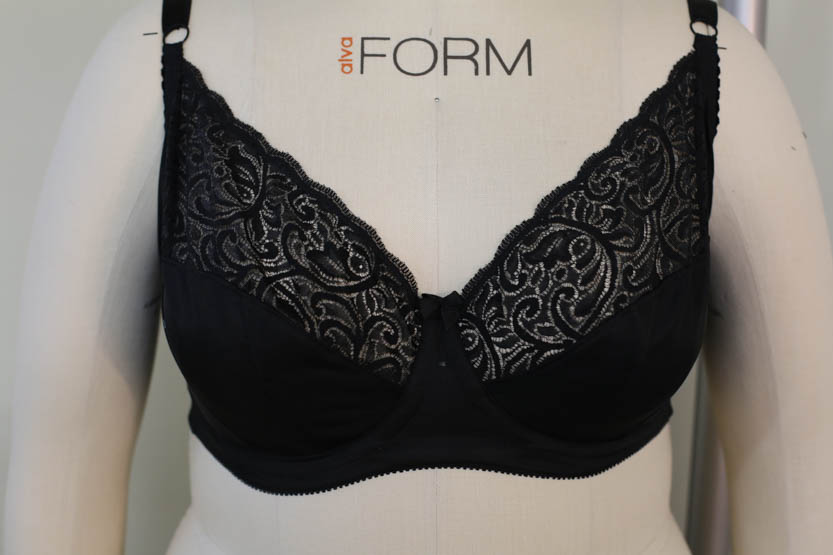 As modeled on my Alvaform, sparing my blushes and also the Google Searches of future employees and internet dates. 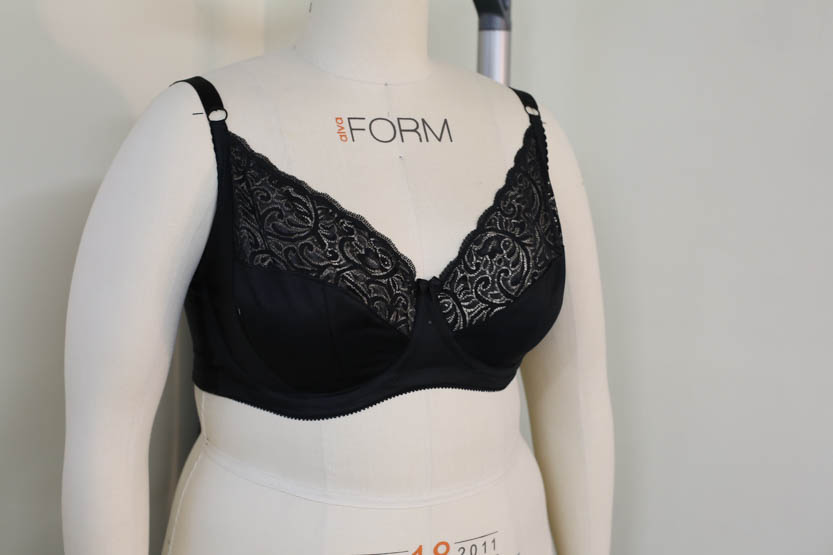 Unfortunately… it still didn’t fit. This is the point at which I got very confused, because I’d tried Norma’s samples on many times and they’d always fitted me. What I didn’t account for is… my bust got bigger. Bigger! Blimey days. Yep, recent weight gain has apparently added about 1.5 inches to my bust-line. Gah. So this bra *almost* fits… but not quite. I will however hold onto it because not only is it my first real bra, but I may well fit into it again at some point. 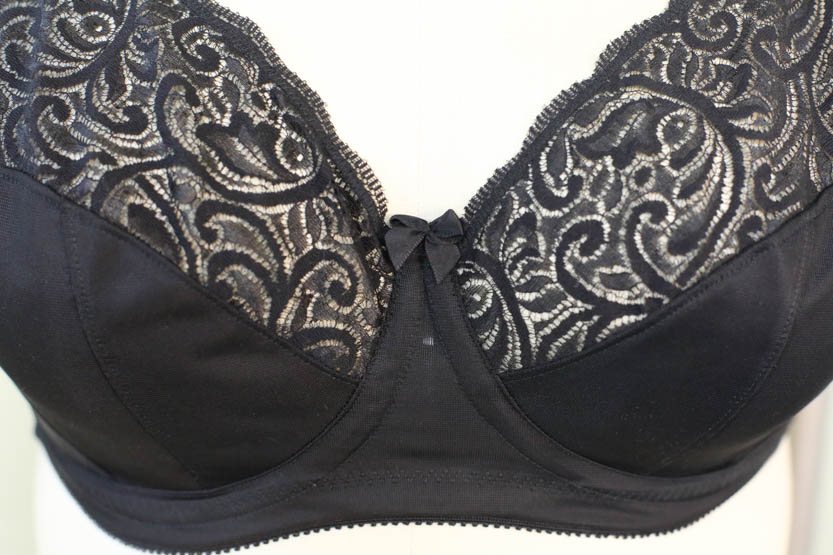 Construction wise, I was pretty pleased with my second attempt – the instructions are great, and it really is much faster than sewing clothes. I used more fabrics from Bra Makers Supply including the Large Notions Kit (for larger bra sizes), and a much more robust lace which doesn’t have big holes in it.

So my journey to bra-making started… not too badly! I may not have quite made it yet, but clearly there’s a learning curve (BA DA BOOM), and I’m looking forward to figuring out my size at last and then making ALL the pretty bras (mostly I just want to copy this one from Heather 1,000 times).

Any other mega-busty sisters making bras these days? Any tips for me as I dive headfirst into the fray?

45 thoughts on “Plus size bra-making… an odyssey!”

Sign up for our newsletter and you’ll receive exclusive offers, curvy sewing news, and 10% off your next purchase.
END_OF_DOCUMENT_TOKEN_TO_BE_REPLACED