This month, we’re excited to collaborate with fashion historian and sewing expert Julie Eilber on two fabulous Cashmerette Club designs: the Rockwell Dress and the Caroll Shrug. We sat down for a chat with Julie to help you get to know her and Claire McCardell better!

The Rockwell is a glamorous (yet surprisingly easy to sew) 1940s style gown that can look high fashion or everyday casual depending the fabric and styling. The Caroll Shrug is a single pattern piece with so many uses. It pairs great with the Rockwell (and creates instant sleeves) but also adds visual interest to any outfit.

The Rockwell Dress and Caroll Shrug are available exclusively to Cashmerette Club members. Not a member yet? Join today for as little as $9 (cancel anytime). 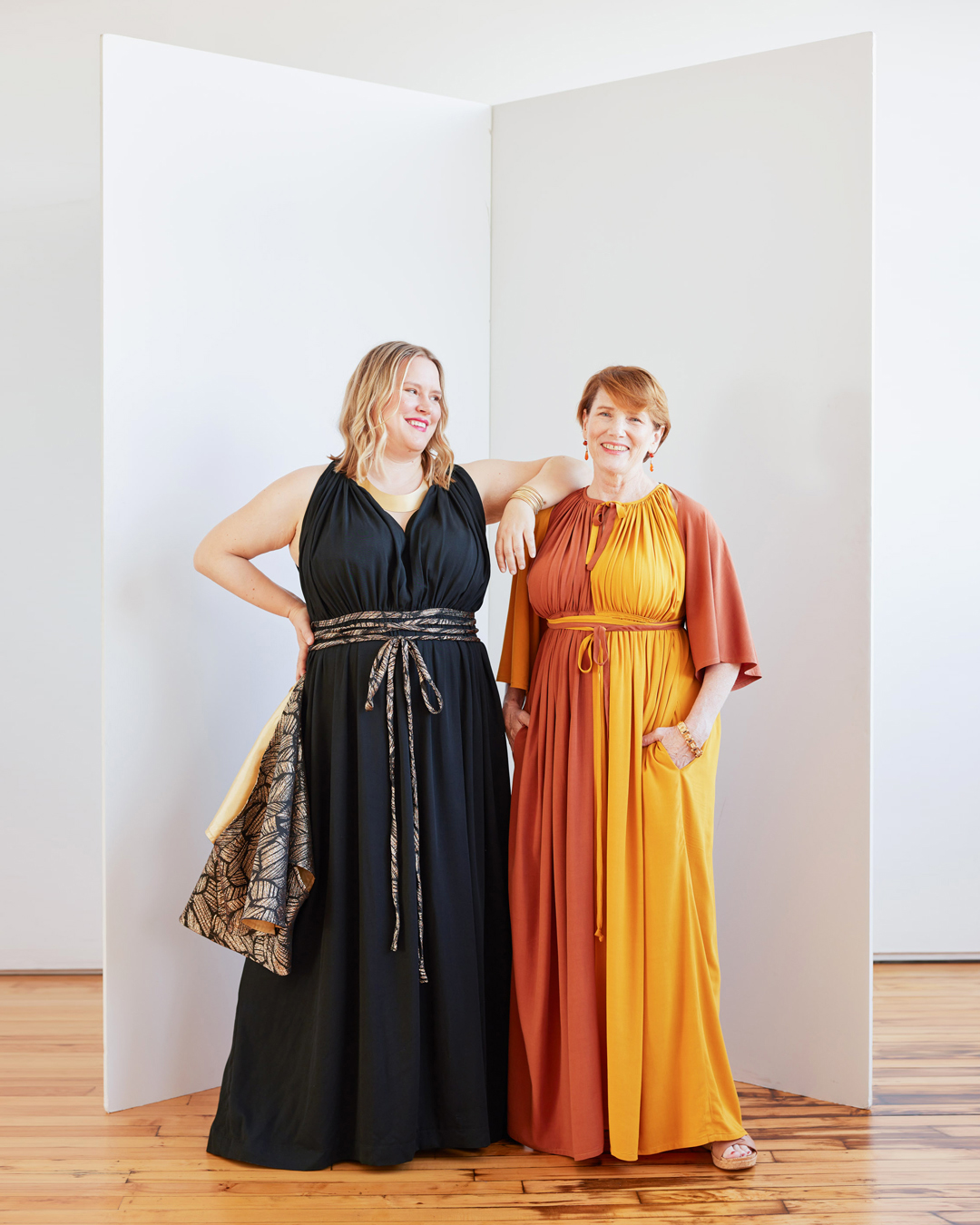 Julie has spent the last several years researching the life and work of legendary midcentury designer Claire McCardell, and she’s reconstructed a number of McCardell’s famous designs, including this month’s Cashmerette Club offerings. You may know Julie from her irreverent blog Jet Set Sewing or her popular Instagram account, and she’s also a sewing ambassador for BERNINA of America.

Let’s start out with Claire McCardell. Why is she considered one of the greats of American design?

JULIE: Claire was one of the most famous designers in the U.S. during the 30s, 40s, and 50s—she won the Coty Award and made the cover of Time Magazine. Her clothing was sold in major department stores, and it appealed to modern women who were working, traveling, biking, and generally flexing their new-found independence. 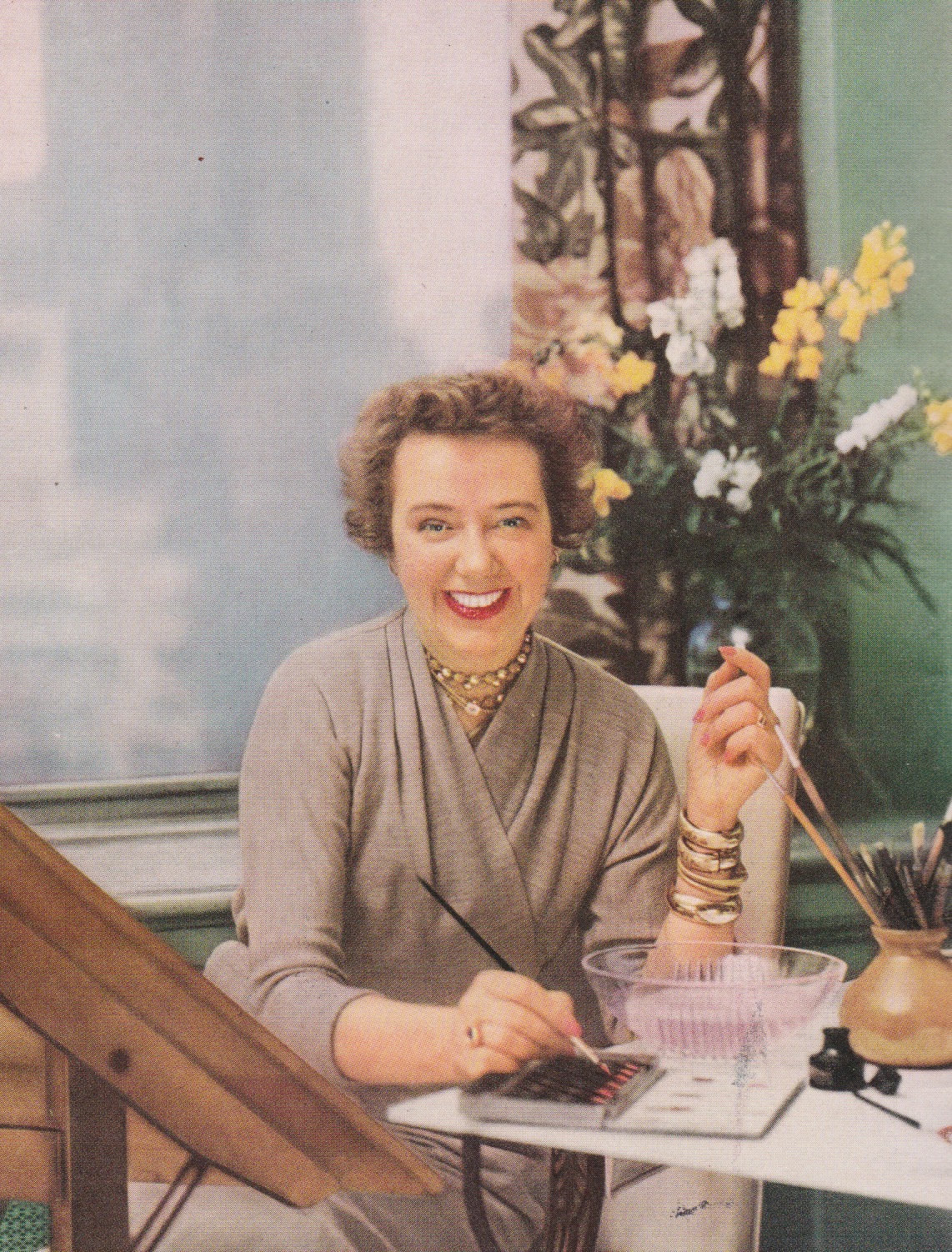 She was known for creating, as she said, “clothes that move.” They were comfortable and practical, yet chic, alluring, and very modern. If you’ve worn wrap dresses, ballet flats, travel separates, hoodies, activewear, denim jackets, or playsuits recently, you’re following in her footsteps. She generally used humble fabrics like cottons, rayons, and men’s wool suiting, particularly during WWII when some fabrics were rationed, because she believed that clothing should be easy to maintain. And she always put big, useful pockets in her clothes! 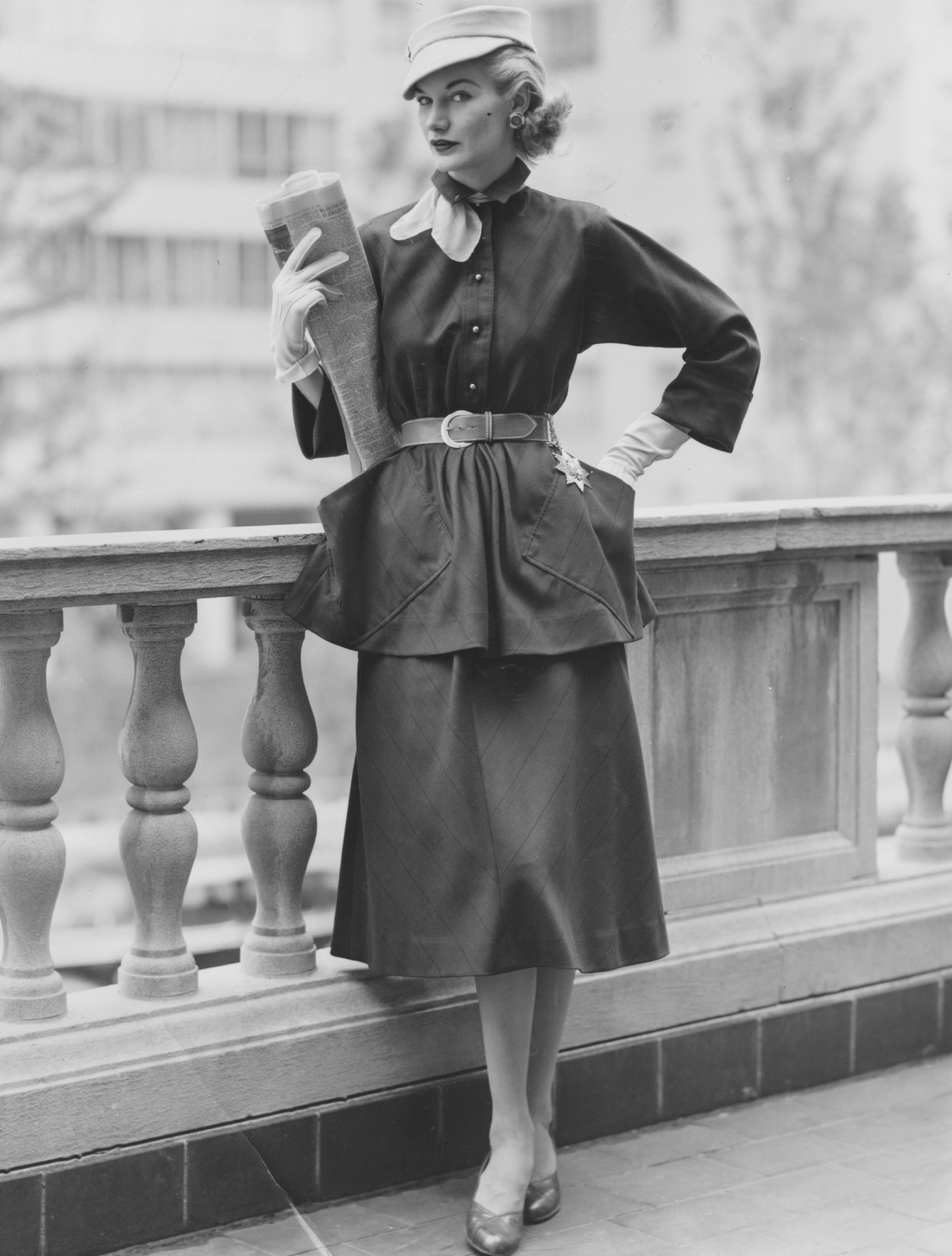 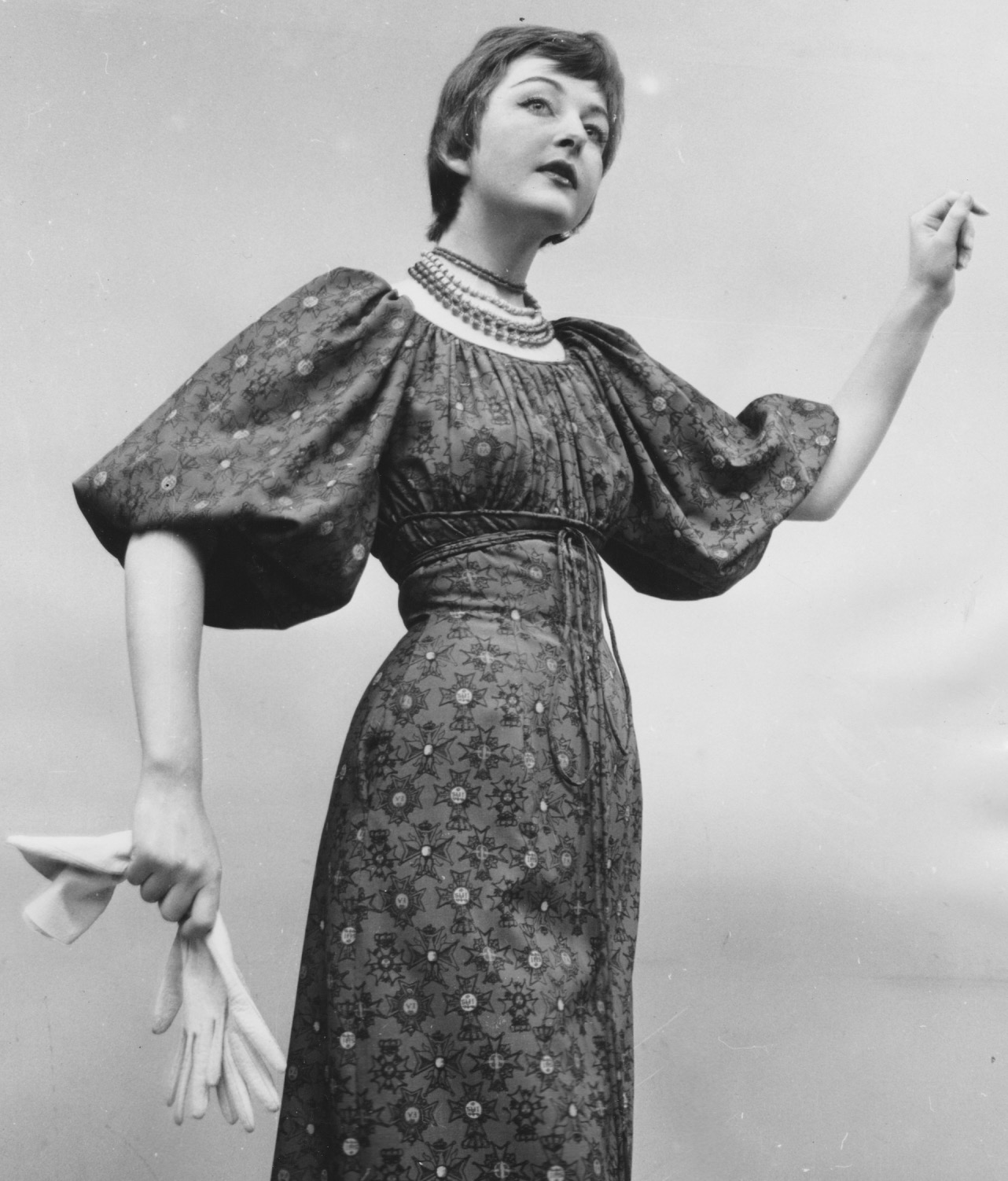 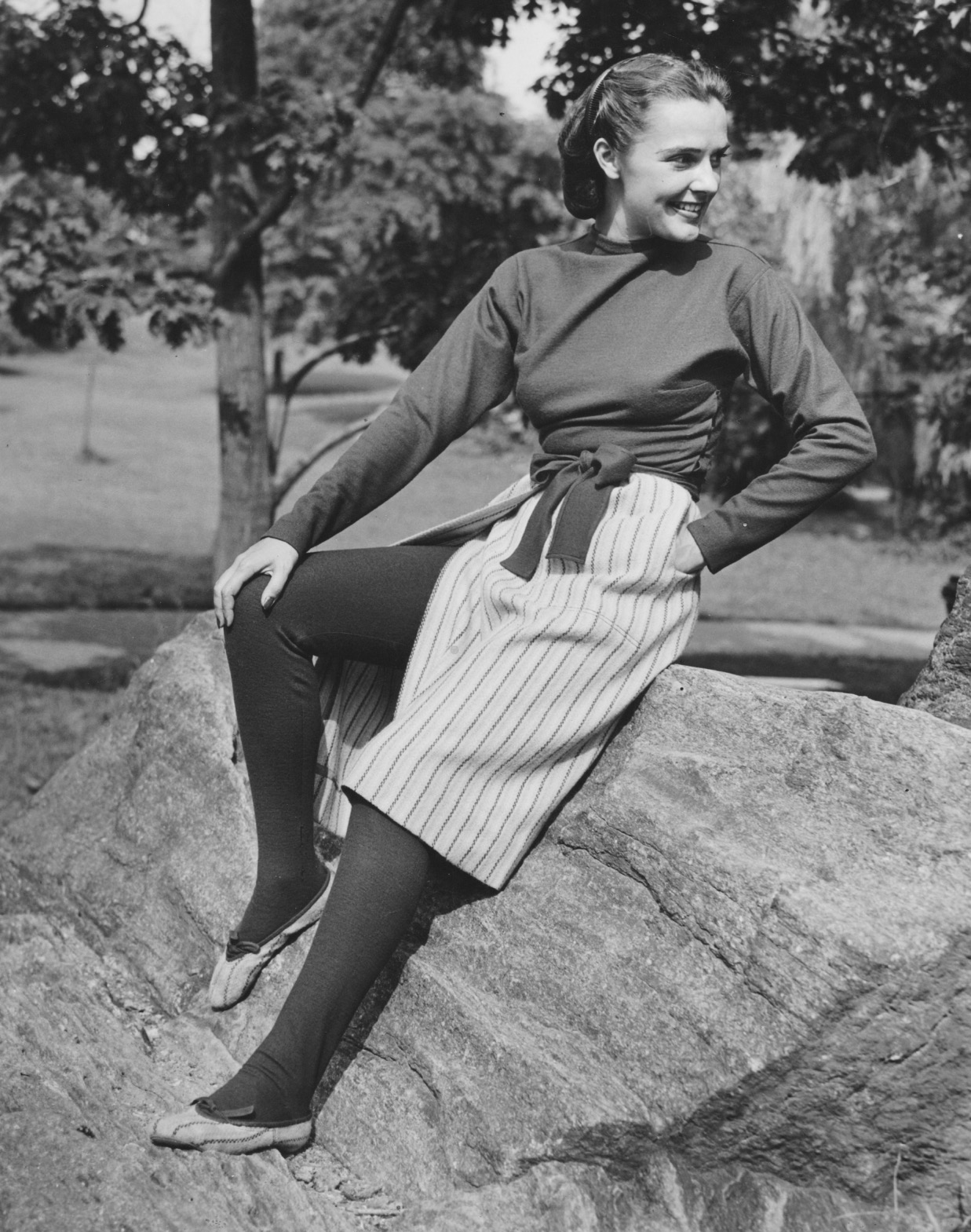 Her designs were wildly popular in her day. Her fans ranged from Hollywood stars to artists like Georgia O’Keeffe, who later called Claire “the best woman designer we ever had.” Her fashions have inspired generations of designers including Halston, Donna Karan, Isaac Mizrahi, and recently Tory Burch, and they’re featured in major museums like the Metropolitan Museum of Art.

Her clothing was designed to be flexible, to give women options for different ways to wear them. The Rockwell Dress has more than 15 feet of ties around the waist! When we were modeling the dress for the pattern photos, each one of us found a different way to tie them.

The dress has a lot of volume and movement, which makes it wonderful to wear. The day we were modeling—after we’d been chatty and goofy during lunch—I noticed a change right away when we all donned this classic design. Suddenly we were serene, confident, and alluring. We were McCardell women. 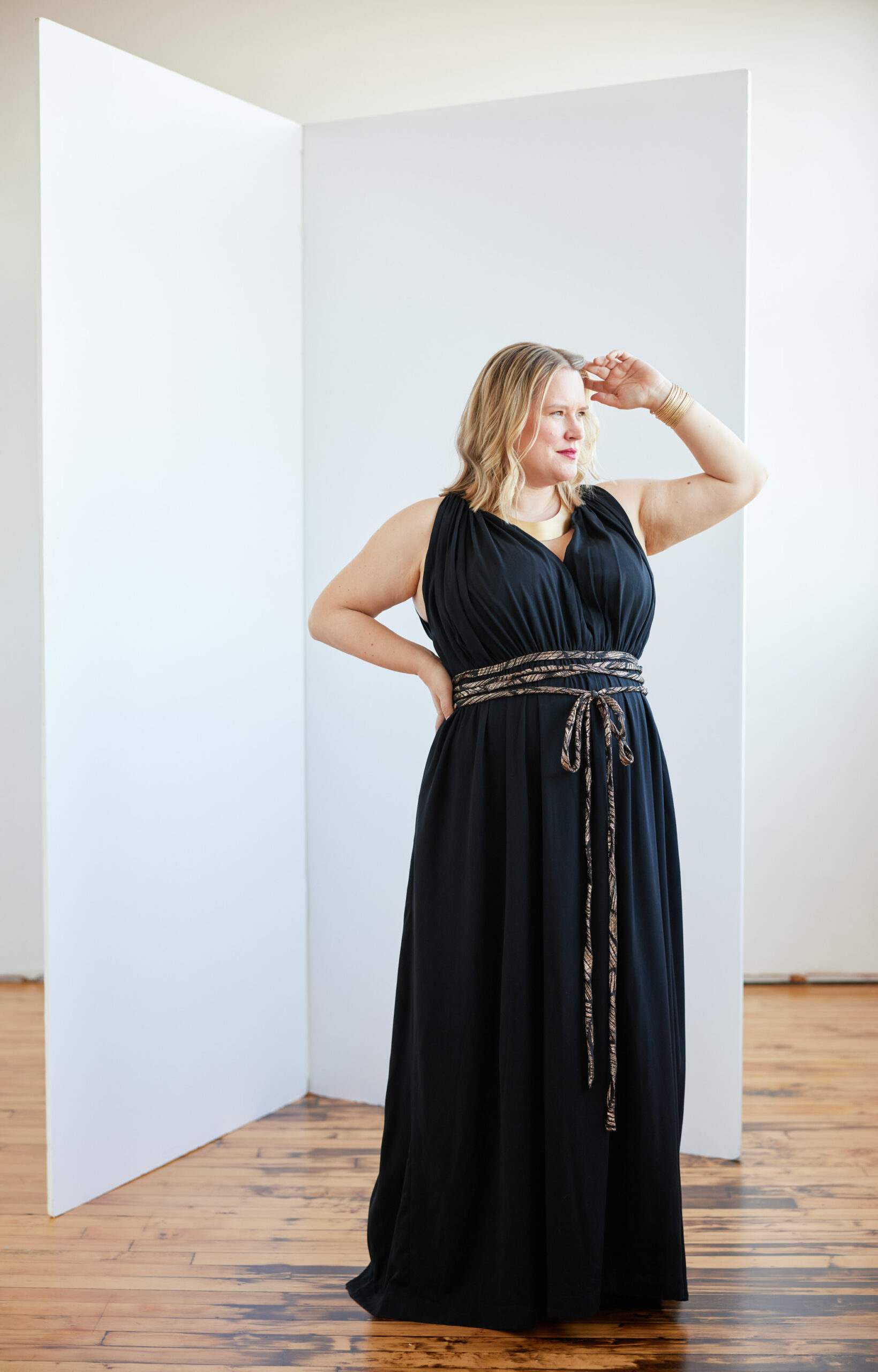 Your fashion history research includes both writing and sewing. How did you get started sewing?

JULIE: I started sewing as a child, taught by my mom and my sisters. Back then in the 60s, sewing was considered a skill that every woman needed to have, but I really took to it. We lived in northern Michigan, and practically the only way I could get access to any of the fashions in Seventeen Magazine was to sew them myself.

During the 70s, I sewed patterns by great American designers like Halston, Anne Klein, Betsey Johnson, and Diane Von Furstenburg. Working my way through these patterns, which were drafted from original garments back then, gave me an appreciation of how the designers approached the look. And I had fun wearing them to the disco!

How did fashion history become a part of your writing?

JULIE: I was always a fan of vintage fashion, which became popular during the 70s. My mom gave me the book “Cheap Chic,” which was my guide to thrifting, vintage, upcycling, and other low-cost fashion hacks that were just emerging. Back then you could find plentiful fashions from the 30s, 40s, and 50s, so I used to run around the University of Wisconsin wearing a big swing coat and a thrifted tux jacket.

As I got older, I worked as a TV producer/writer for CBS News and PBS, and I also wrote documentaries for the Smithsonian. But even though I was a “yuppie” (AKA “young urban professional”) I never lost my love of vintage. My late husband worked on the Oscars telecast, and for quite a few years I attended the show wearing 50s haute couture gowns from a vintage dealer in Paris. Later I sewed my own red carpet looks from vintage designer patterns by Madame Gres and Schiaparelli, which I documented—for better or worse—on my blog. 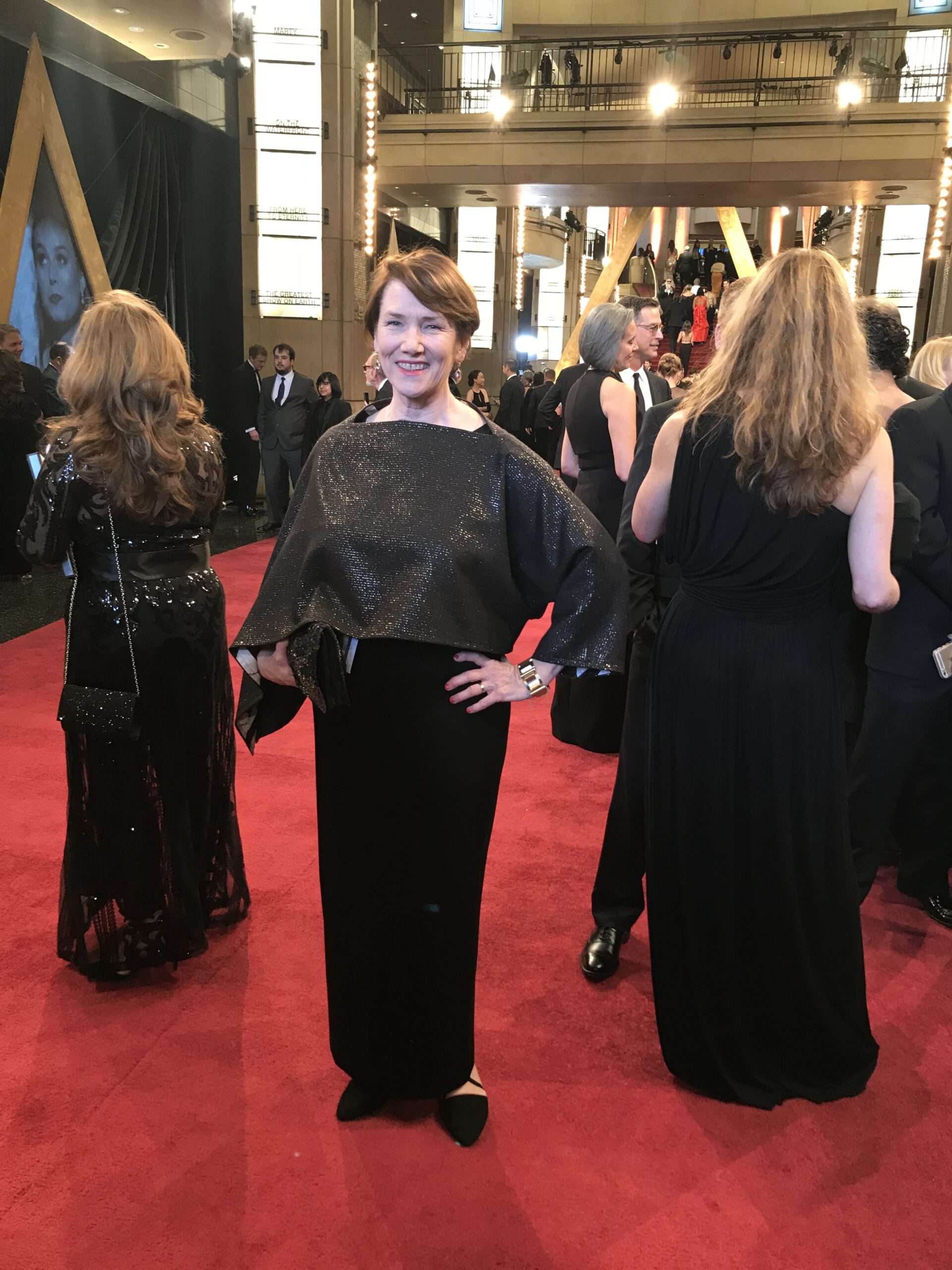 Along the way I used my research and writing skills to become an expert on Claire McCardell and midcentury American fashion. Now major museums contact me for information about Claire’s life and designs, and in recent years I’ve made fashion history presentations at the Museum of Modern Art and the Balenciaga Museum in Spain.

How did you become interested in the life and work of Claire McCardell?

JULIE: It was quite by accident! After my son was born, I got interested in collecting and sewing patterns by the great designers of the 20th century, and which I wrote about on my blog. I had heard about McCardell’s chic, modernist designs, and while looking in her archives for her lost patterns, I found the fascinating story of her life instead.

I began recreating some of her fashions by studying original garments and pattern pieces in my collection, along with her original sketches and notes in several archives. It gave me so much joy and insight to make and wear her clothes that I felt I needed to share these patterns with the sewing community. My hope is that my sewing peeps who make these patterns will learn a lot about Claire, and enjoy wearing the clothes as much as I do!

What is unique about the Rockwell Dress and Caroll Shrug?

JULIE: The Rockwell Dress is a classic McCardell design, known as one of her “monastic” dresses (because it’s belted like a monk’s robe). When she started designing in the 30s, a lot of American fashion consisted of bad knockoffs of fussy French designs. The clothes really didn’t make sense for active women in the U.S. who were working at jobs or keeping house. So Claire came up with a dress with a lot of volume that hung loosely from the shoulders and was cinched at the waist with a sash or belt. The design sold out immediately and soon was knocked off all over 7th Avenue. It really changed the way American women wanted to dress. From then on, Claire always had versions of a loose dress belted at the waist as part of her collections.

The Rockwell Dress is inspired by a design from the late 40s and almost feels like a toga. It includes several of her signature design features: lots of volume gathered at the neckline, long ties that she called “spaghetti strings” to give the dress an adjustable waist, and of course, the massive pockets she was famous for. She designed her dresses to make it easy for an independent woman to put them on by herself, without fussy zippers or buttons to reach for in the back. 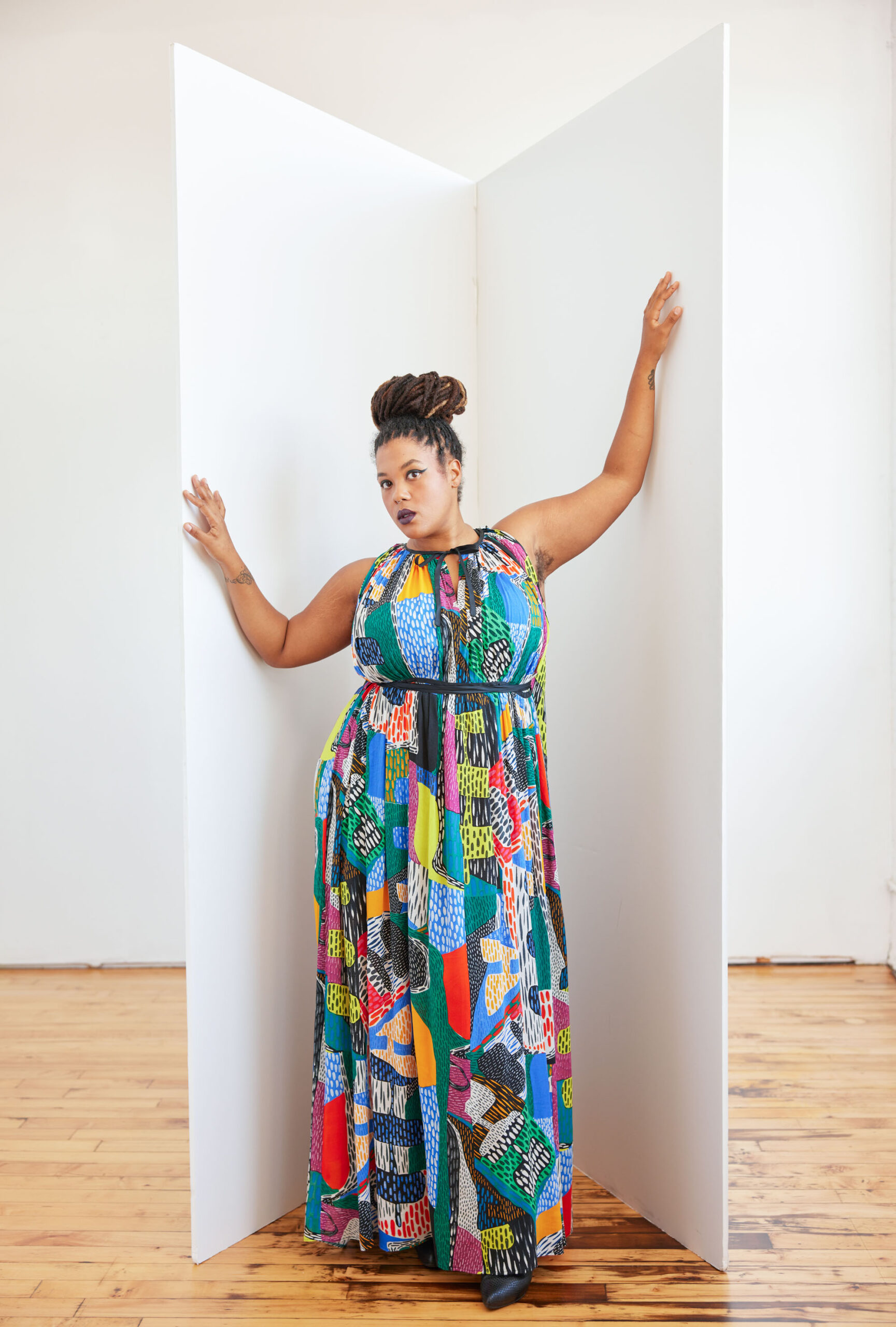 The Caroll Shrug design is really a standout, because it’s so simple (just one pattern piece), but the bias cut gives it soft movement and an interesting design in the back. Claire studied fashion in Paris in the 1920s, and one of her design heroes was Madeleine Vionnet, who was pioneering draping fabric on the bias at that point, meaning that the pattern pieces were cut at a 45 degree diagonal from the grain.

If you turn pattern pieces on the bias, suddenly woven fabrics will stretch and hang in a very fluid way. Using this principle, McCardell often cut bodices and shrugs on the bias to give stiff fabrics more drape. For example, the blue striped shrug I’m wearing in one of the pattern photos is made from vintage men’s suiting fabric, but since it’s cut on the bias, the fabric has a much softer look and feel. 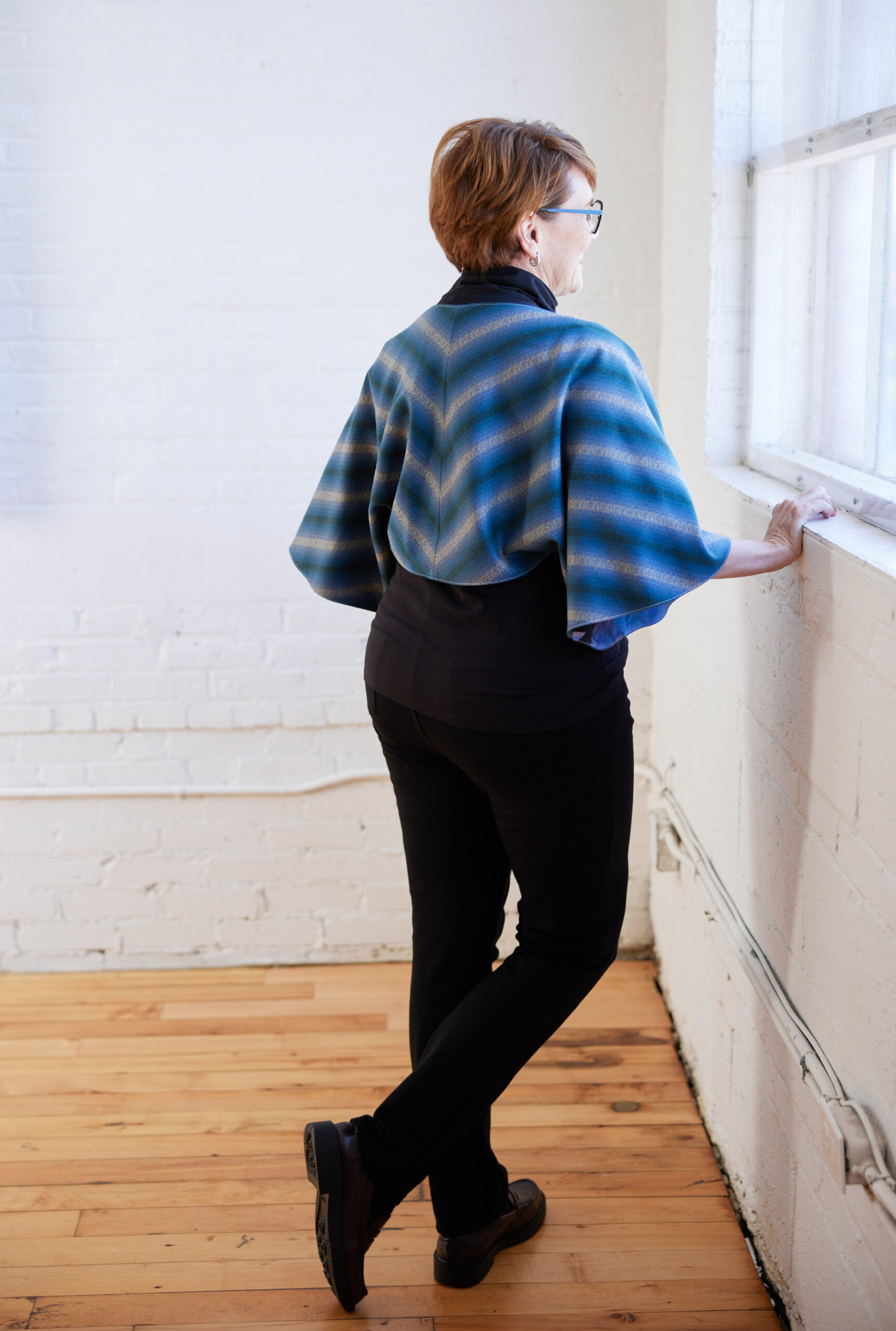 And the reason the Claire designed shrugs to go with her dresses? She hated being cold! She always wanted to have practical shrugs, wraps, or jackets so she wouldn’t be cold after being outdoors hiking or skiing.

We loved collaborating with your on these patterns! How did the collaboration go for you?

JULIE: Wonderfully well! I had initially wanted to do a book that would be a biography of Claire’s life, which would include these sewing patterns. I had editors at five or six publishing houses get very excited about the idea, but unfortunately their sales departments felt differently and nixed the project.

Eventually I decided to separate the biographical book from the patterns, and was so fortunate that Jenny of Cashmerette offered to collaborate on them. Those of us who sew vintage designer garments know how difficult it can be to find patterns that don’t require a lot of modifying to fit larger sizes, and Cashmerette has a great reputation for quality patterns that fit different body shapes.

I had reconstructed the dress and shrug in the past, and basically started from scratch with the instructions to make them easier for modern sewing enthusiasts. The Cashmerette team and I went through numerous drafts of the patterns and instructions, making modifications so they would fit different sizes and be easy to sew. Then the team formatted the instructions and layout and took the beautiful photos that made these patterns a reality. I was so thankful to have this experienced team working on them! I really couldn’t have done it without them! 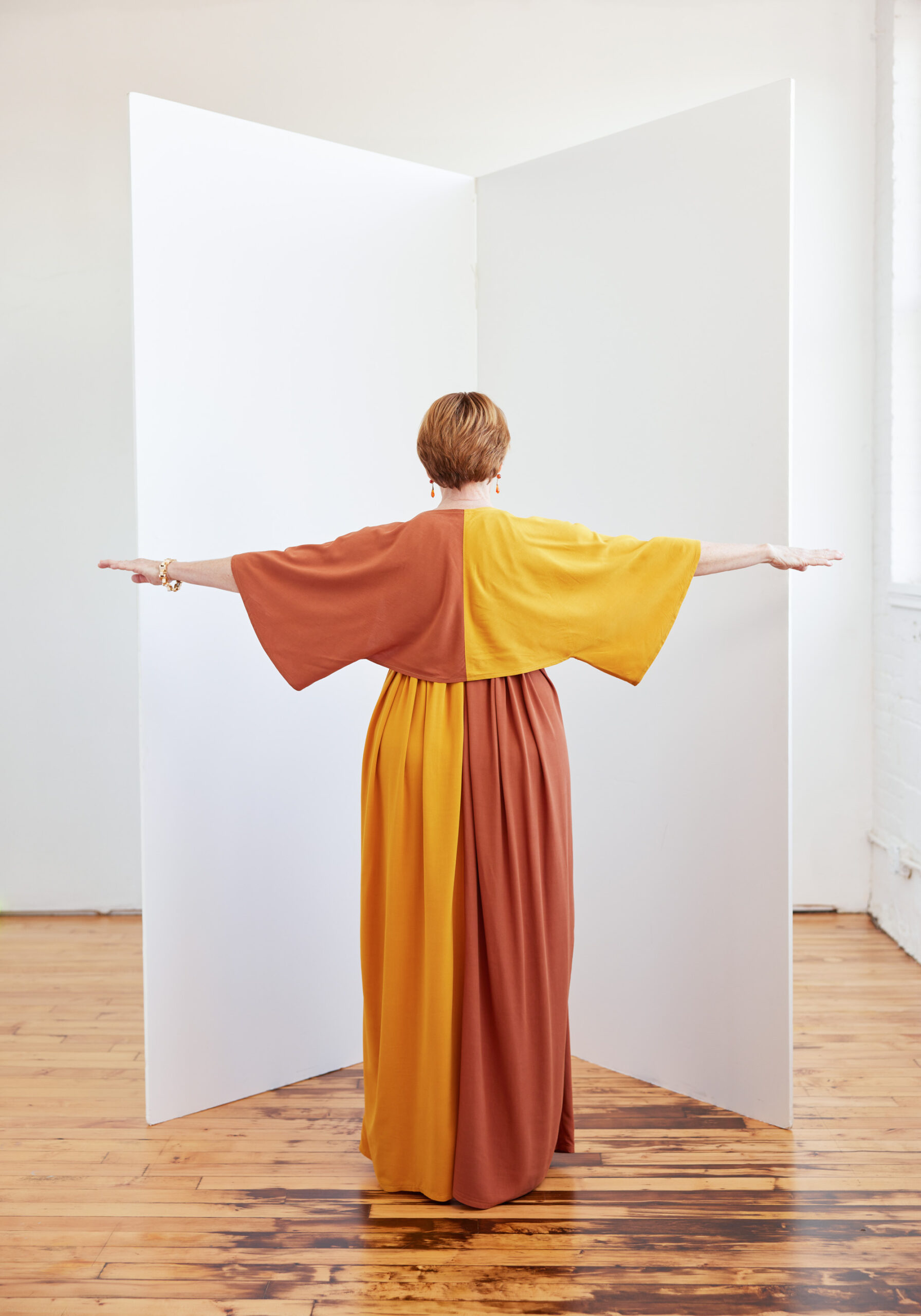 Join Cashmerette Club to get the Rockwell & Caroll

We can’t wait to see how you put your own spin on these unique designs!  Join Cashmerette Club today to download the Rockwell Dress and Caroll Shrug and get started sewing instantly.

(Joining after November 2022? You’ll need to sign up at the All Access level to get the Rockwell Dress and Caroll Shrug.)

Sign up for our newsletter and you’ll receive exclusive offers, curvy sewing news, and 10% off your next purchase.
END_OF_DOCUMENT_TOKEN_TO_BE_REPLACED