Hi everybody, Jenny here! And oh my, what a year 2019 has been at Cashmerette! Full of firsts both personal and professional, which has been so much fun but also utterly exhausting. Believe it or not, we have even more BIG NEW SHINY THINGS coming in 2020, so after a well-earned break for Christmas and Hanukkah we’ll be back at it in January. 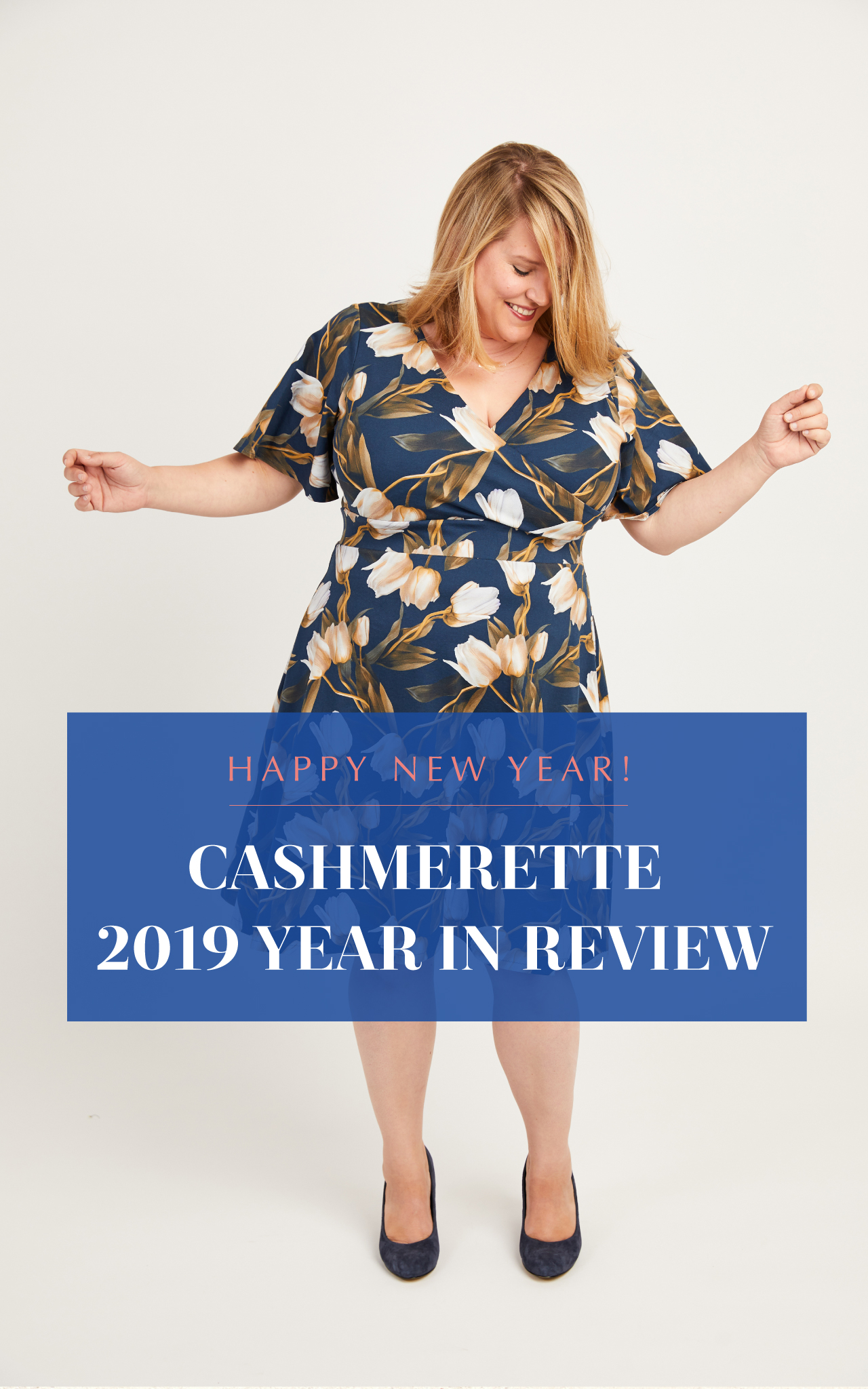 Personally, it’s been a momentous year, because I became a mother while also running a small business, which I knew would be no small feat, but in practice is even harder than you might imagine. Luckily for me, Carrie and Ayelet seamlessly kept the Cashmerette boat afloat for 5 months while I was on maternity leave, giving me the chance to focus on snuggling my daughter and attempting to get the occasional nap. My daughter’s the cutest, funniest, cheekiest little one you can imagine, but she’s also been chronically sick since she started childcare, so the second half of the year meant I was still leaning really hard on Carrie and Ayelet as I haven’t been able to work consistently for the past three months. So, moral of the story: if you have a small business and a baby you should DEFINITELY get yourself a Carrie and Ayelet. Not mine though! Get your own! 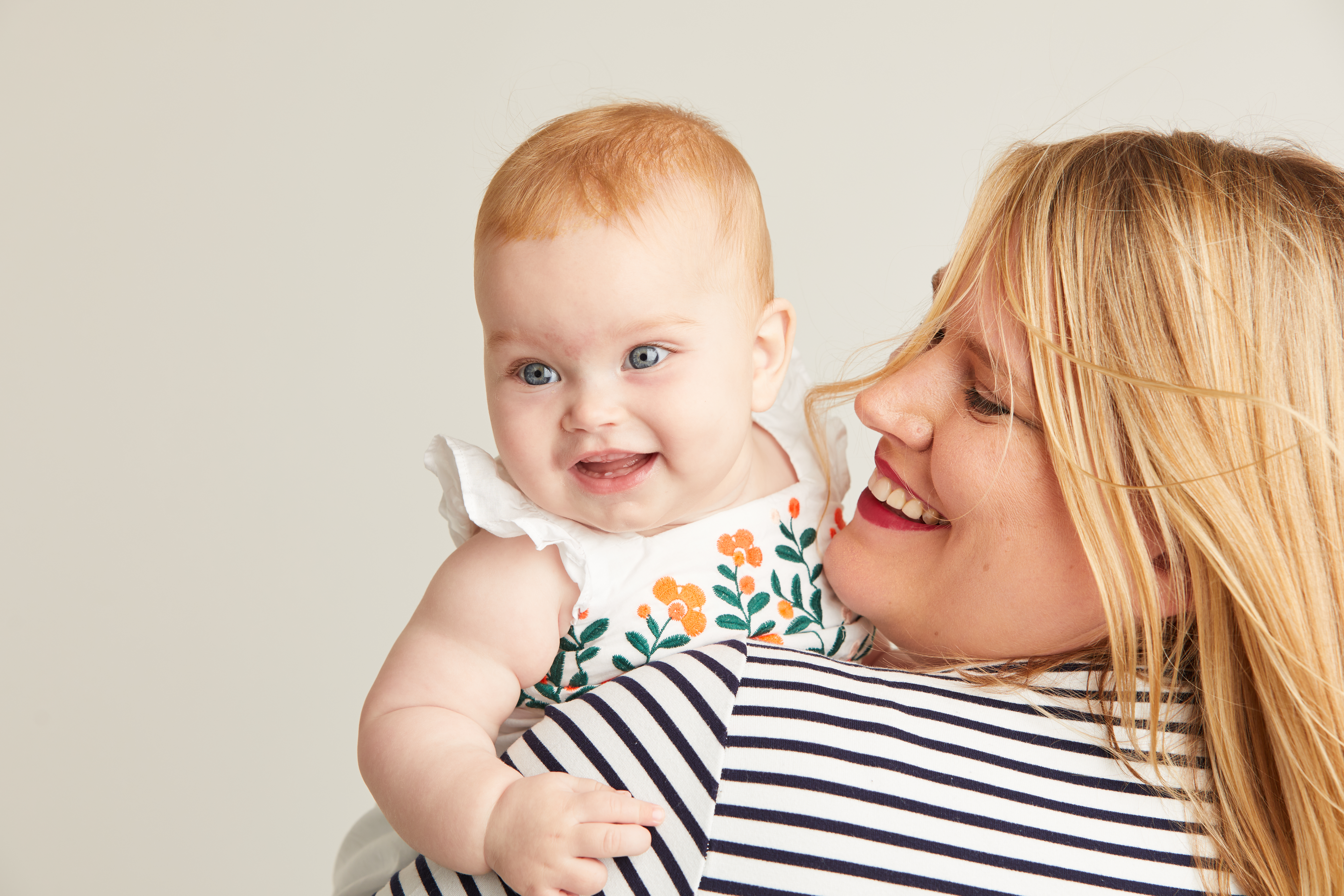 Super cute babies aside (as if that’s possible, pah!), Cashmerette also got up to an awful lot in 2019.

We kicked off with our first ever skirt pattern, the Ellis Skirt! If you’re not already part of it, you might not have heard of our thriving Facebook Community Group, but that group of supportive Cashmerette fans have a really big influence on what we do – like the Ellis Skirt. We decided a while ago to do a skirt pattern with our unique apple/pear shape fit options, but there are so many types of skirt possible, we decided to poll the group. We didn’t expect that a jeans skirt would be such a popular request, but once it came up it made so much sense–an everyday, casual, easy to wear skirt which looks fantastic on lots of figure types. And on our side, with our Ames Jeans fit already nailed, we had a great starting point. There have been lots of awesome Ellises popping up on the blogosphere, including quite a few in stretch fabrics that aren’t denim, which are super fun! 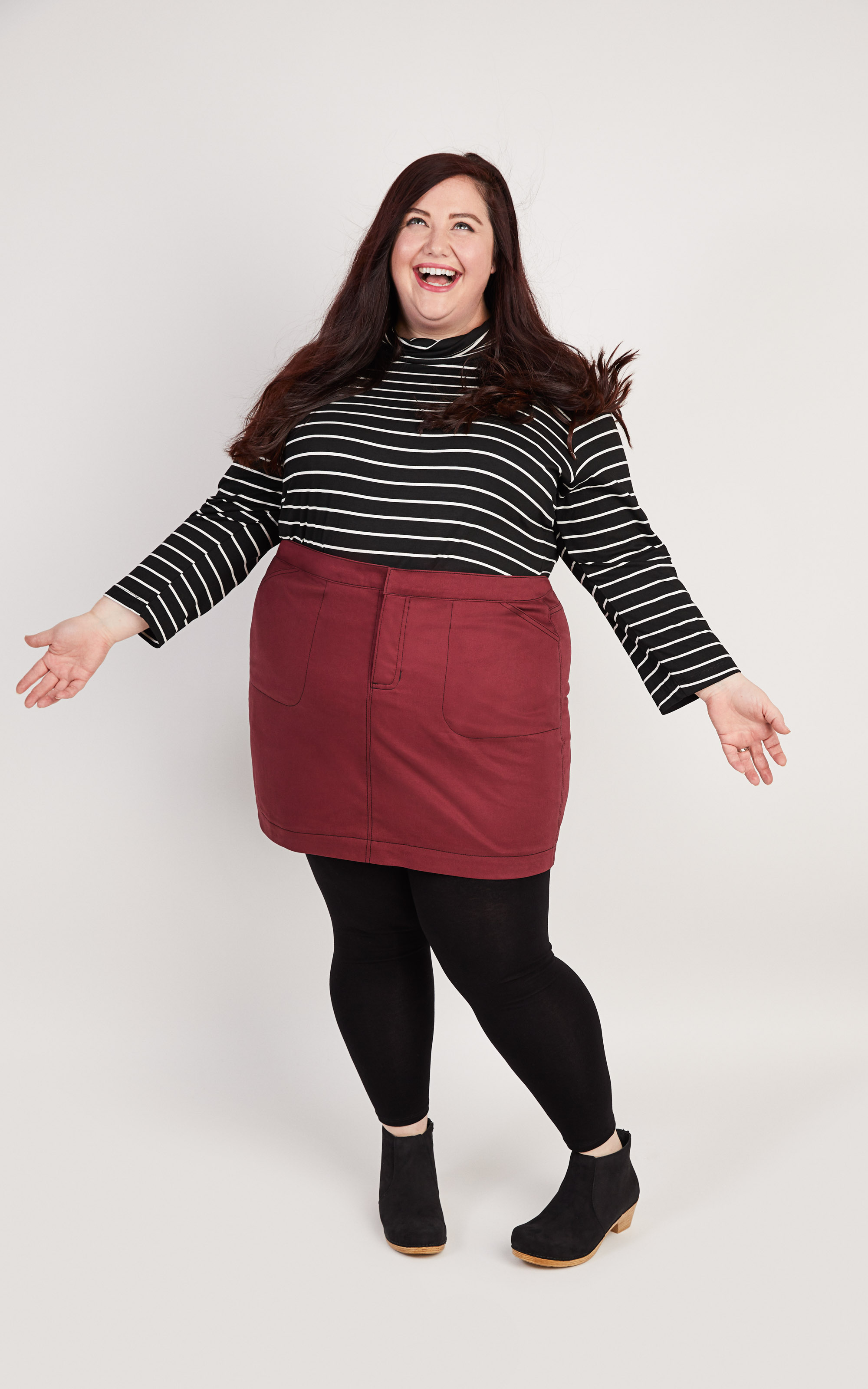 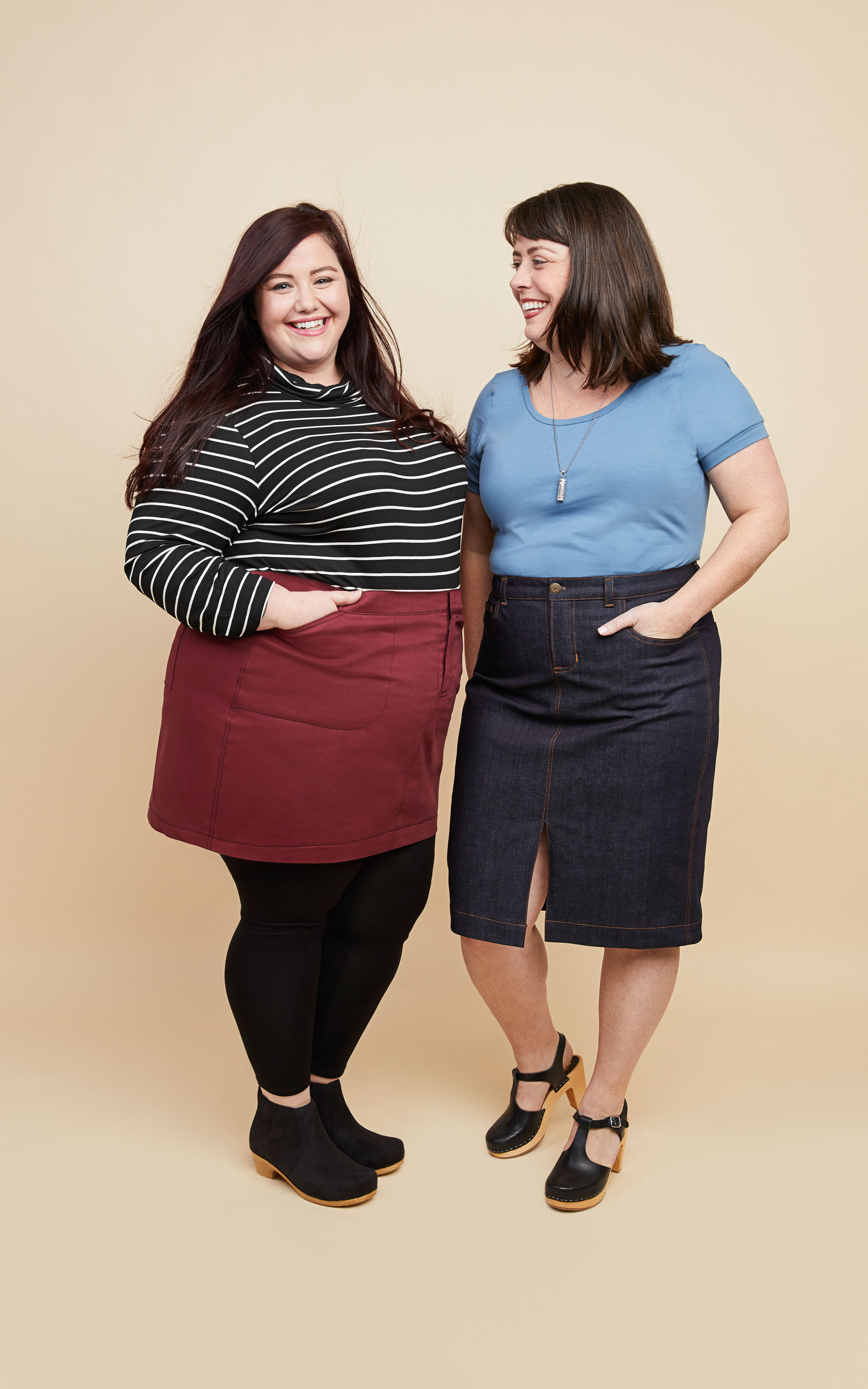 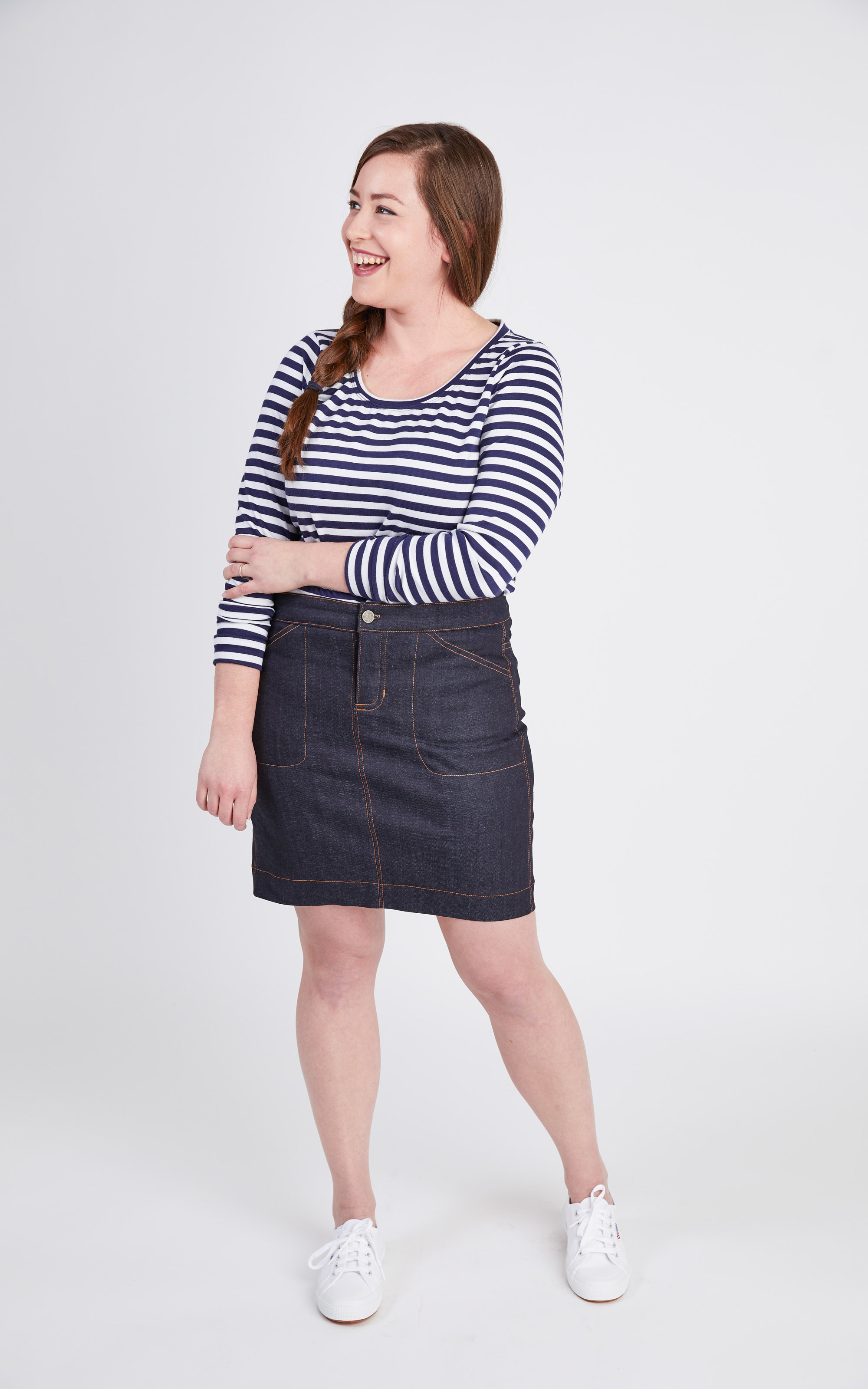 Next up, the blockbuster of 2019, and I think (I should probably check), potentially of all time for Cashmerette: the Holyoke Dress! For years, I’ve seen sundresses like this one pop up from other brands, but I knew I wouldn’t fit them, especially with my bust. Add in buttons down the front, and they really were out of contention without significant fit and style alterations. So I thought: let’s do our own Cashmerette version! We designed the Holyoke to cover bra straps, have zero gaping at the bust, and be comfortable when standing AND sitting down. That was achieved through clever strap size/placement, a faux button placket, and an elasticated back waist, which give you the airy, floaty look of a classic sundress but with none of the curvy perils!

It also makes an awesome floaty maxi skirt too, and indeed Ayelet did an amazing job on the blog showing you how it can also make a fabulous peplum top, knee-length dress or even a short twirly skirt. Creating the Holyoke is one of the things which is most satisfying about running Cashmerette: bringing a garment type to women who wouldn’t otherwise have been able to wear it. The only sad thing for me is because I’m breastfeeding I haven’t been able to wear mine so far this year… bring on summer 2020! 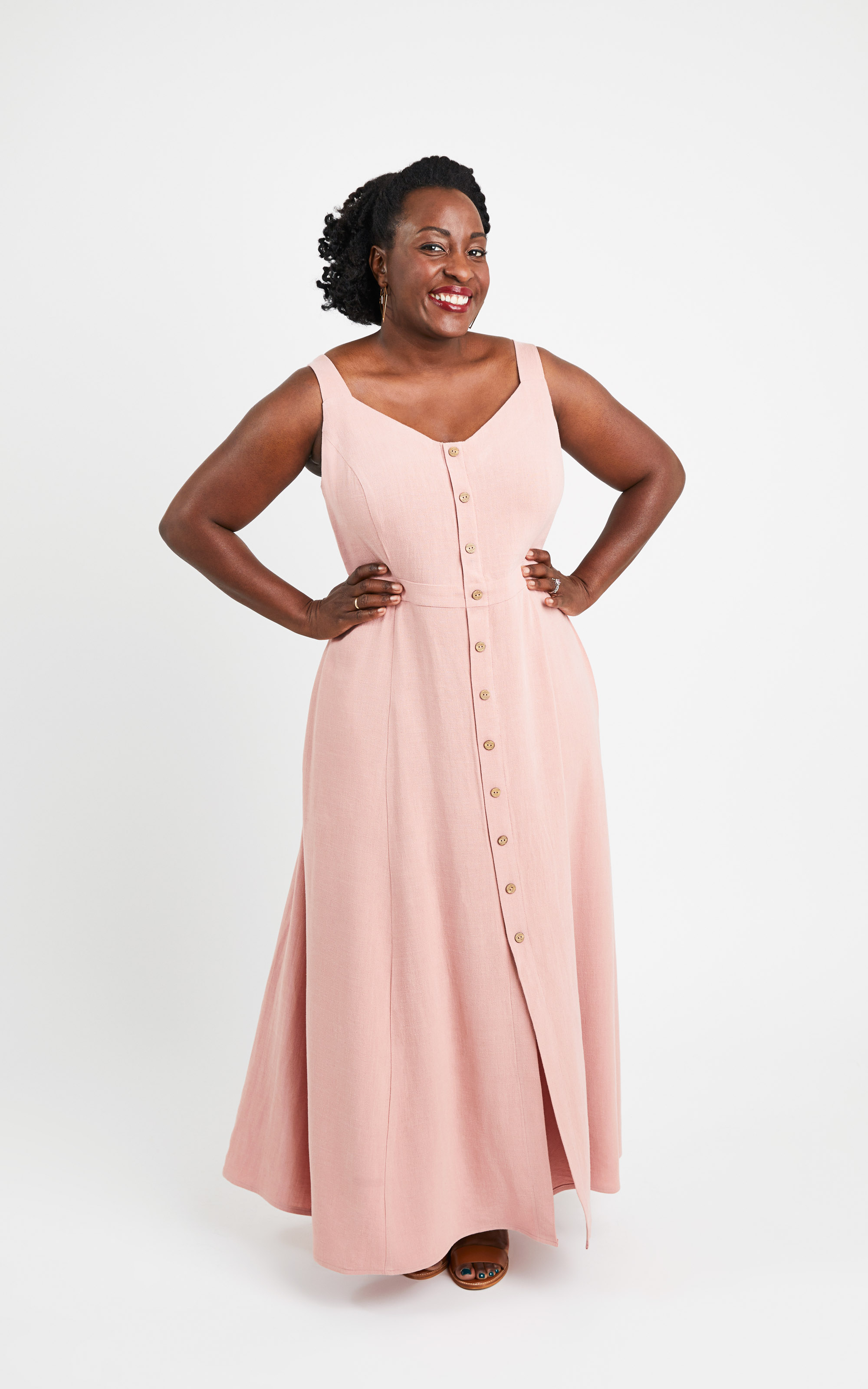 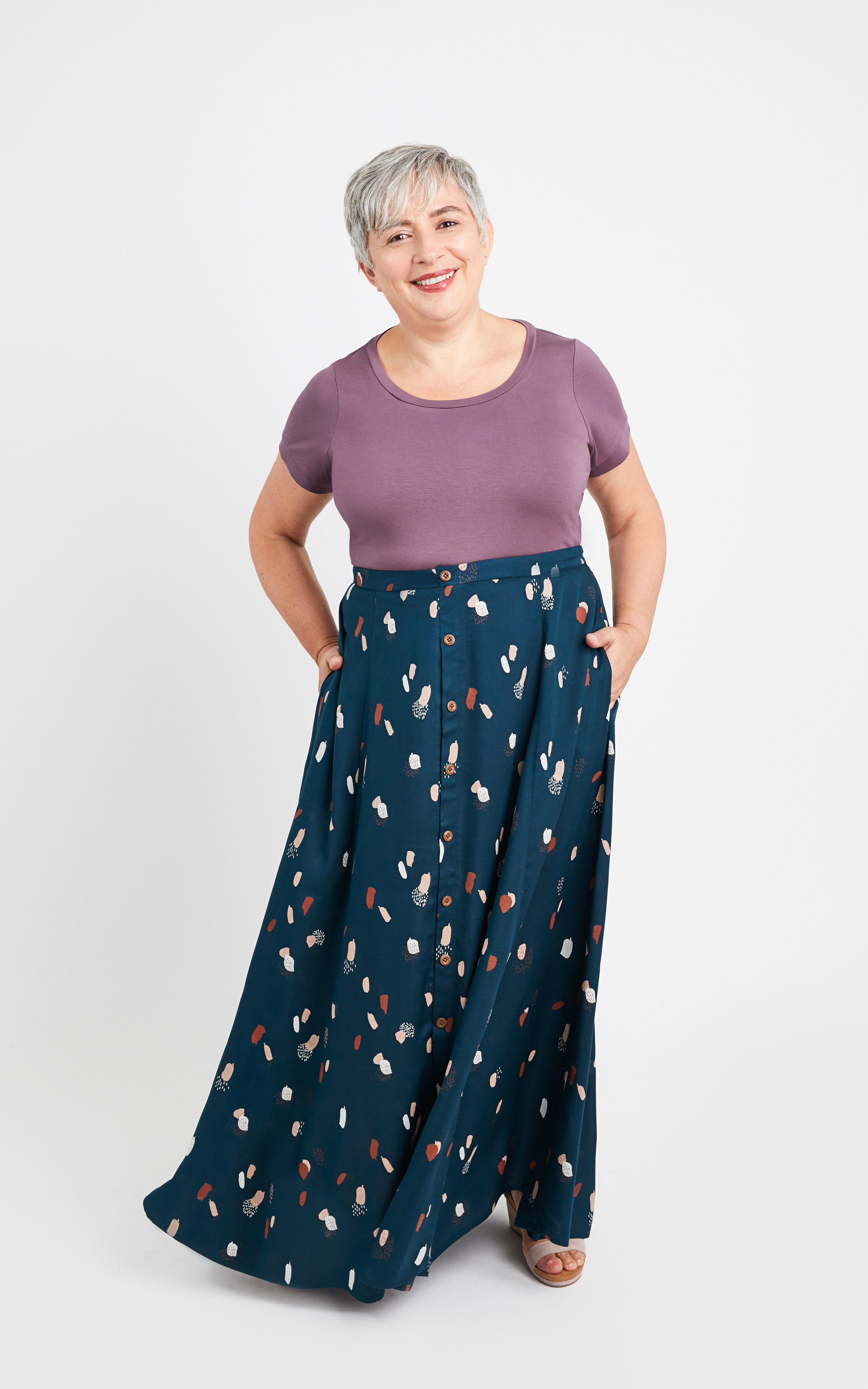 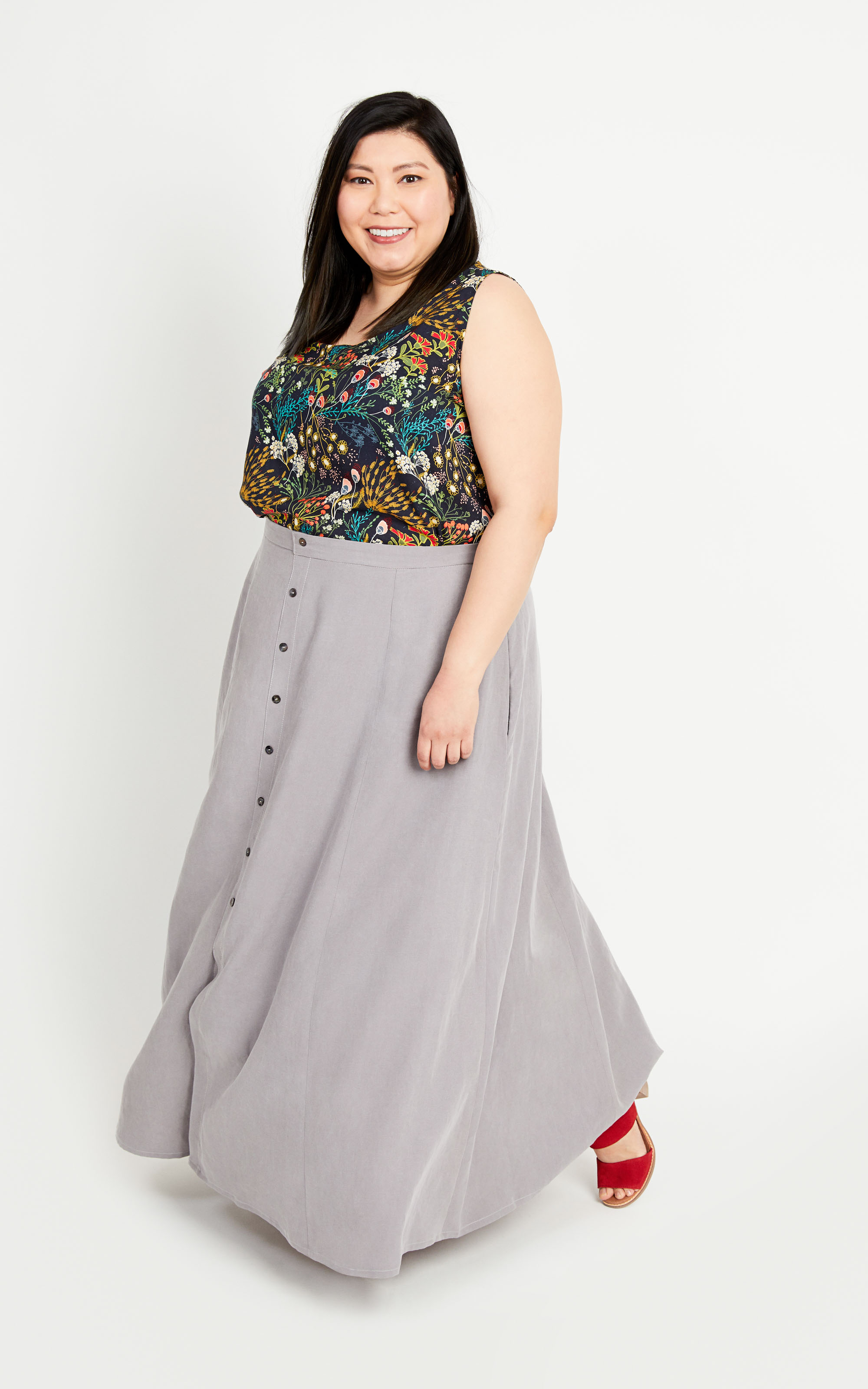 Then in September, we introduced another first for Cashmerette: the Tobin Sweater. For a great fit we took the unconventional route and added bust darts, but trust us, it works really well. There are three really different views of the Tobin which can be mixed and matched, and I wear my sample of view A with the split funnel collar all the time, and I think I probably got more compliments on that than anything else I wore this year! I bought a bunch of gorgeous sweater knits to make some view Bs, and if I can just get my child to take a bottle or cup I might be able to leave her in daycare long enough to actually sew some 🙂 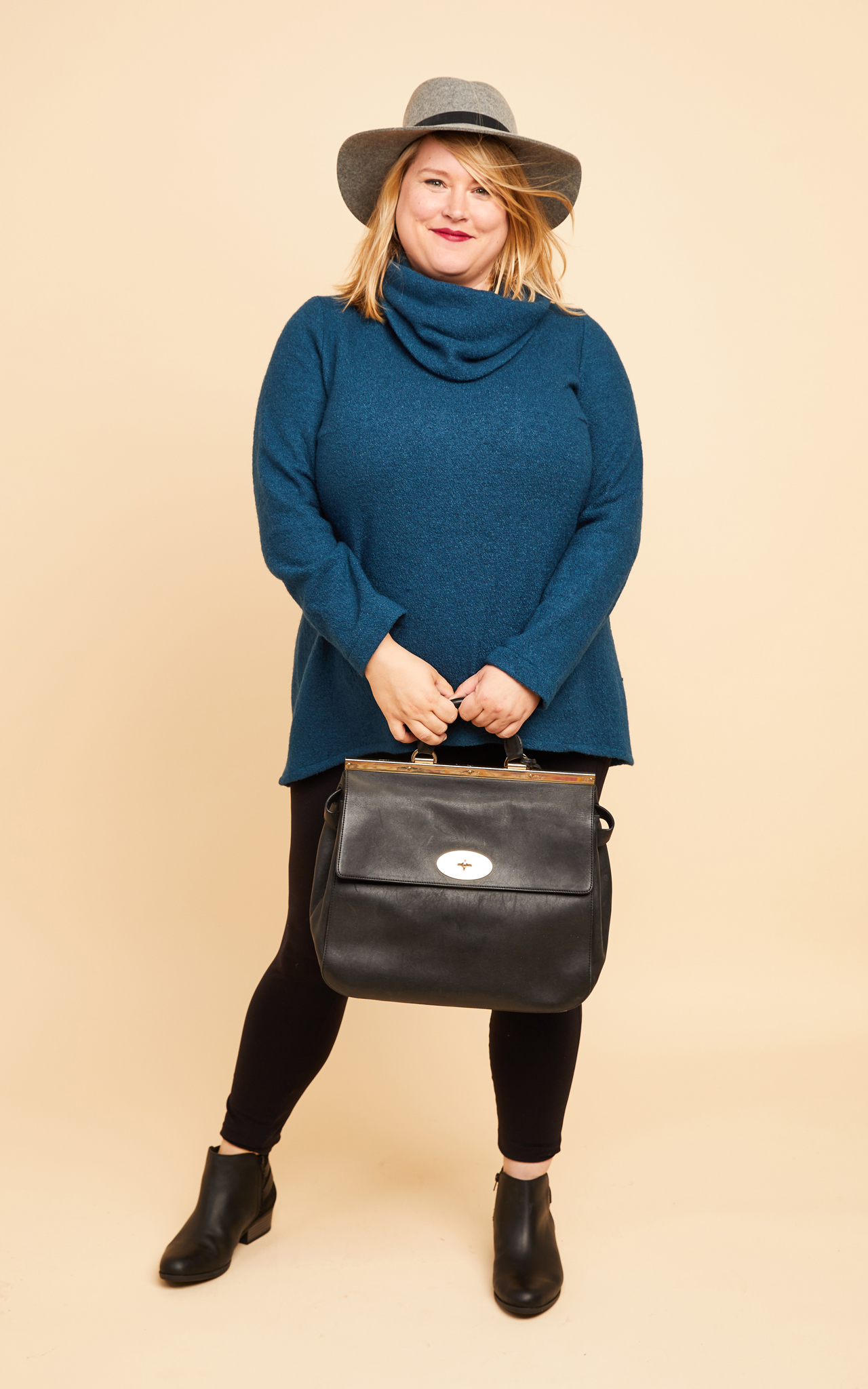 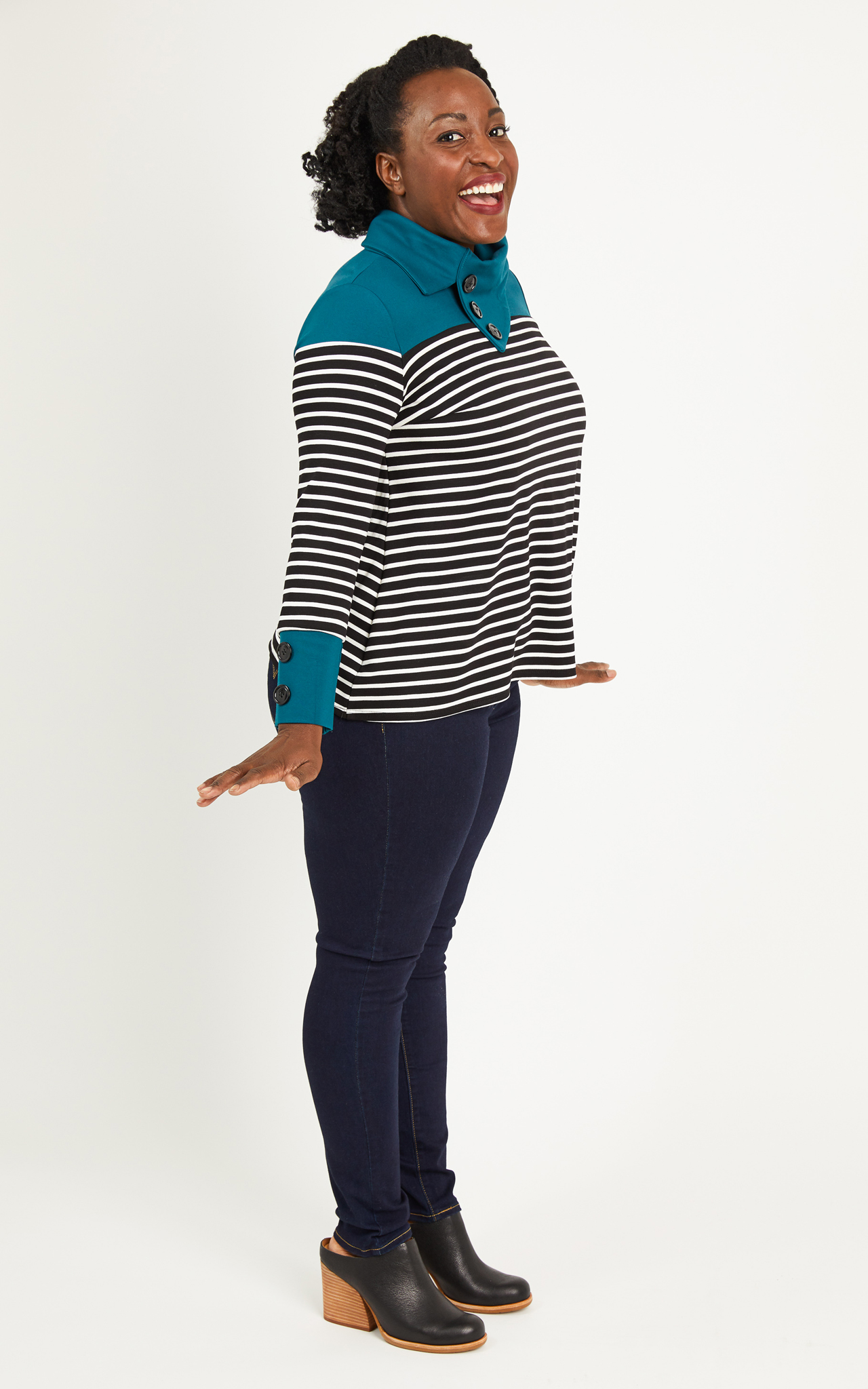 We wrapped up the year with the Alcott Dress, and yet another first (so many firsts!), a maternity option. While I was pregnant we worked on a few maternity and nursing patterns, so expect to see those in 2020, but in the meantime, we realized that with its high waistline and surplice top, the Alcott had really great maternity and nursing potential, so we added an option for a tummy-covering dress even if you’re due any day. The Alcott was another “by popular demand” pattern, because for years, people have been asking us to mash up the surplice style of the Dartmouth with a skirt like the Turner, for a fixed wrap look. We took it one step further with a bit of drama in view B with ruffles galore! The pieces are all mix-and-match so you can also make a more everyday view A with long sleeves, and in fact I’m planning on whipping one of those up in the new year to show you how great it is. 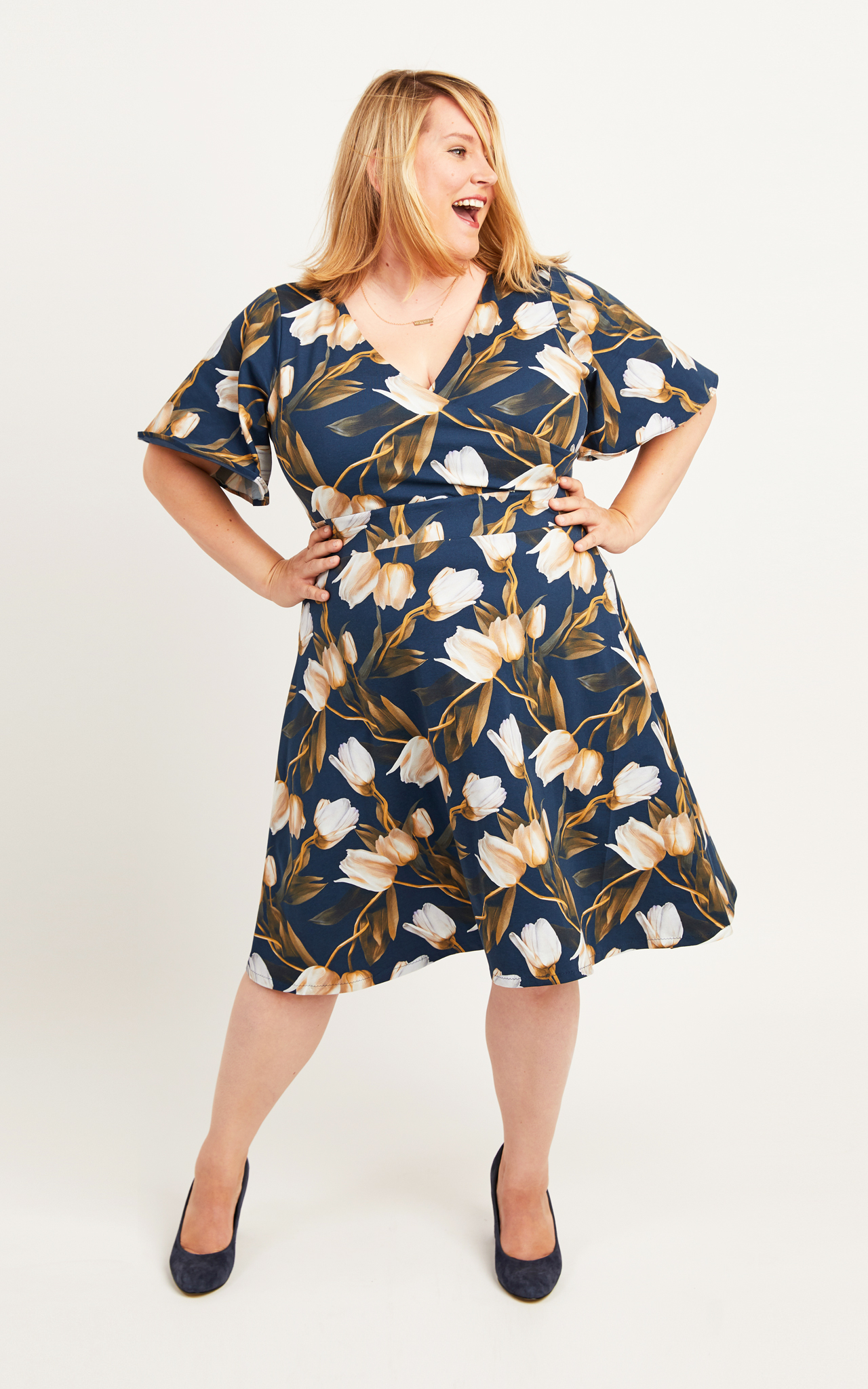 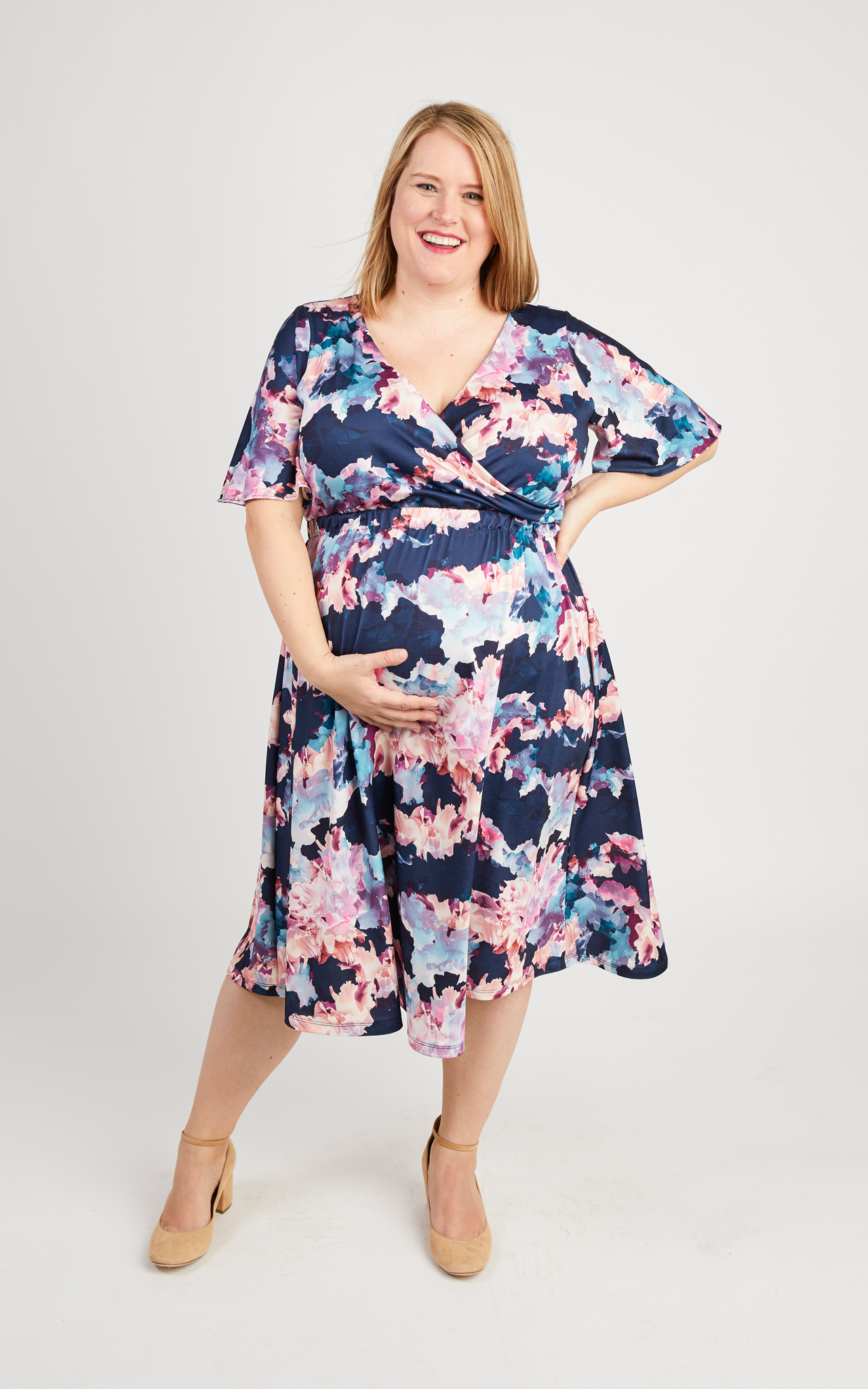 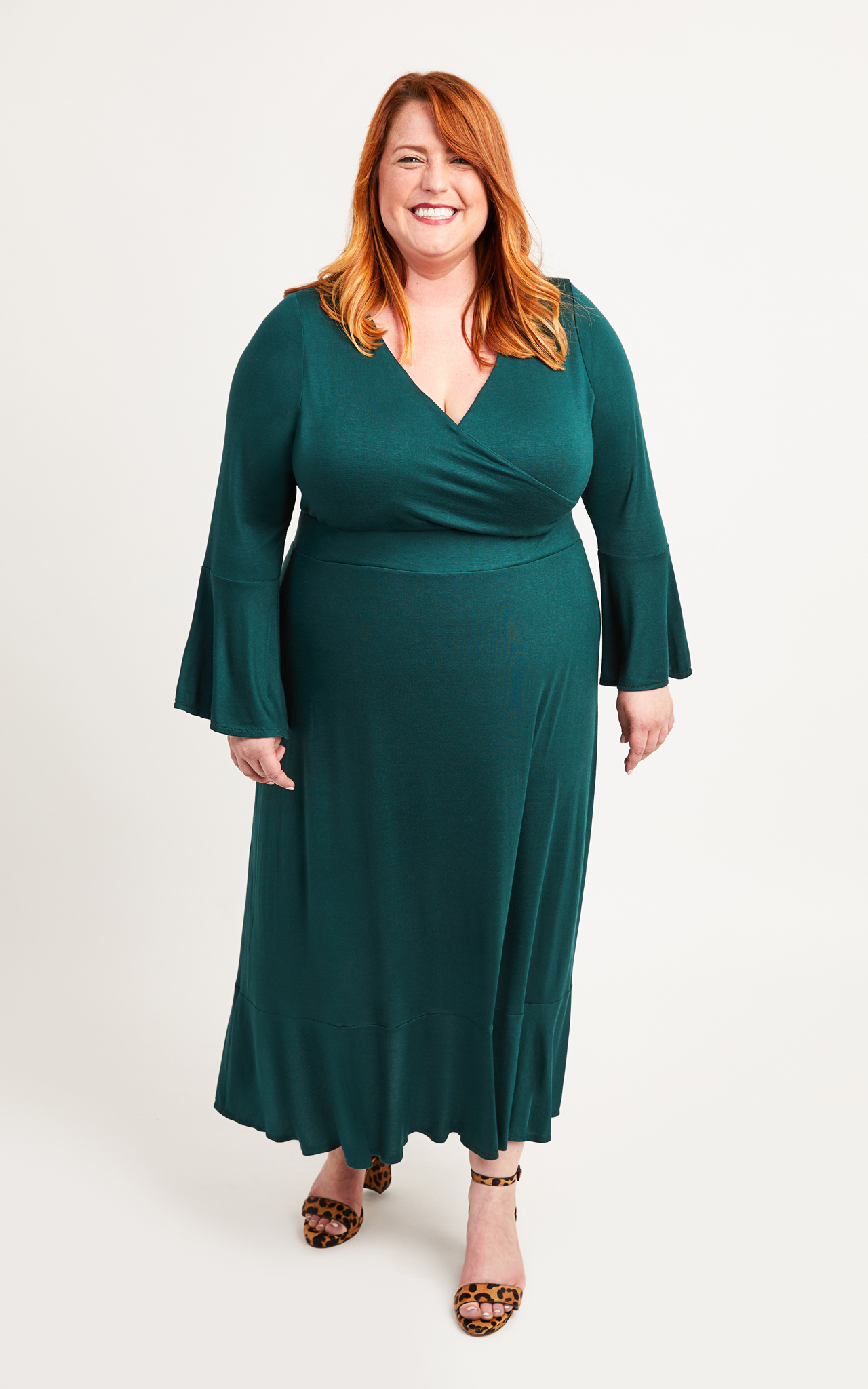 Finally, we ended the year with a super exciting announcement, which could be an absolute game changer for Cashmerette. We heard about the opportunity early in 2019 to be part of a test market in JOANN, which is by far the largest pattern-selling store in the USA, with nearly 900 stores. Of course we jumped at the chance – so much that I finalized the deal the day before I went into labour! All year we’ve been working on it with the JOANN team, and just in time for Christmas, we got 8 of our patterns into 10 stores around the country.

I was honestly bowled over by the response on our blog and social media–so much support not just for the fact that our patterns will be more easily accessible to many more people, but also your support for what it means for us as a business. If we go national, the future of Cashmerette is much, much more certain–we will be able to afford to employ more team members (which we desperately need!), get to many more things on our to-do list, and continue creating things to help curvy women have confidence every day. If you have the chance, please do pop by one of the 10 JOANN stores and even if you’re not in the market for a pattern, let the staff know you’re happy to see them there – generating excitement in store is one of the ways JOANN is deciding if the test was a success! 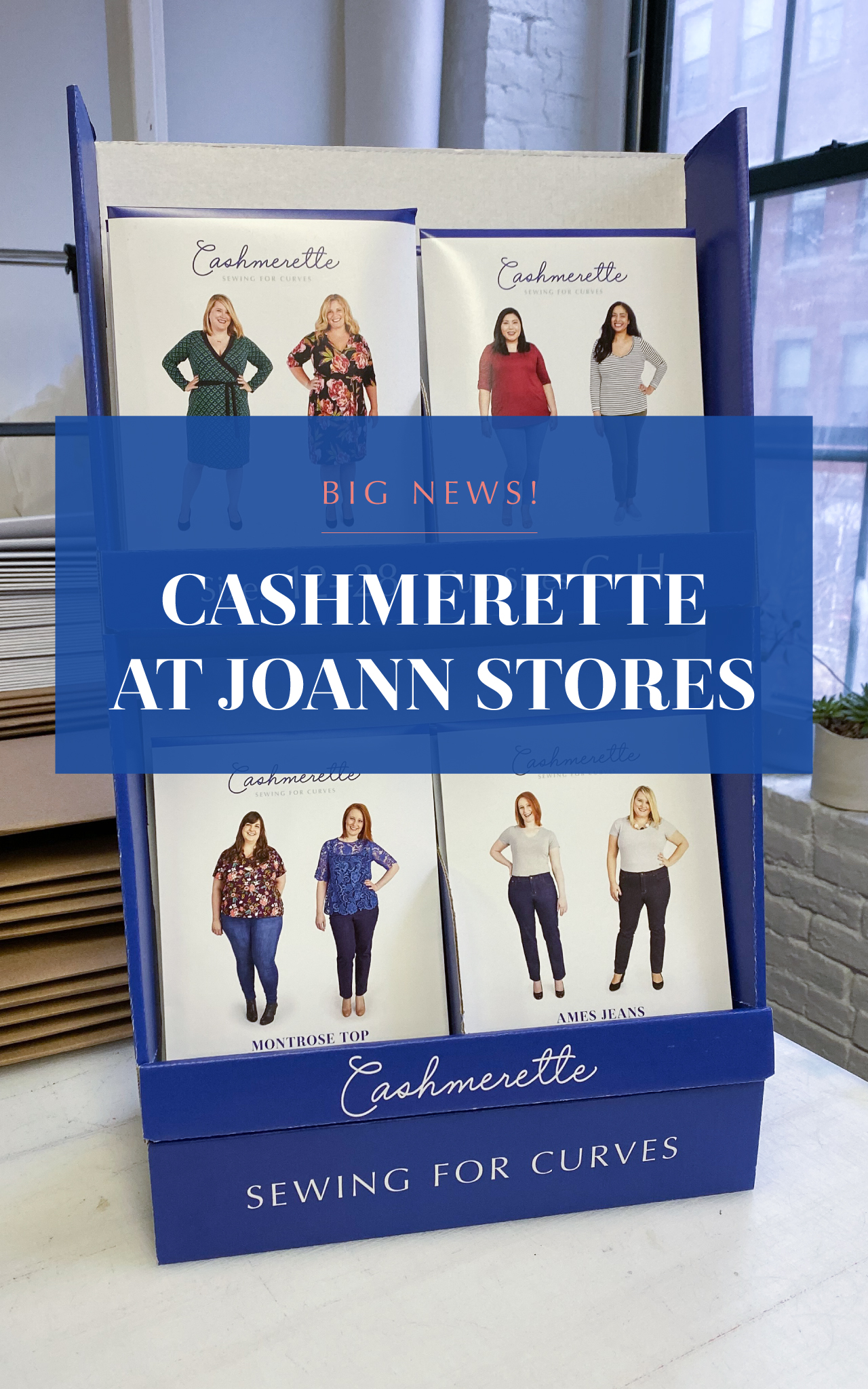 Coming up next year, we have several really big and exciting projects, most of which I can’t tell you about 🙂 However! Our JOANN test market runs til March, so if we do go national, that’ll be happening (a LOT of work for us, but undeniably worth the effort), and, I finally let folks know on social media…. YES, A BLAZER IS COMING. YOU READ THAT RIGHT. IT’S CASHMERETTE BLAZER TIME FOLKS. In fact, people are so enthusiastic about it, we’ve decided to do a blog series taking you through the entire development of the pattern from beginning to end, so keep and eye out of that!

So, thank you so much to everyone who’s supported us this year – we quite literally couldn’t do it without you, and I feel like the luckiest woman alive to be doing a job I love, with a team I love, which gives me time to be with the baby I love.

8 thoughts on “Cashmerette 2019 Year in Review”

Sign up for our newsletter and you’ll receive exclusive offers, curvy sewing news, and 10% off your next purchase.
END_OF_DOCUMENT_TOKEN_TO_BE_REPLACED