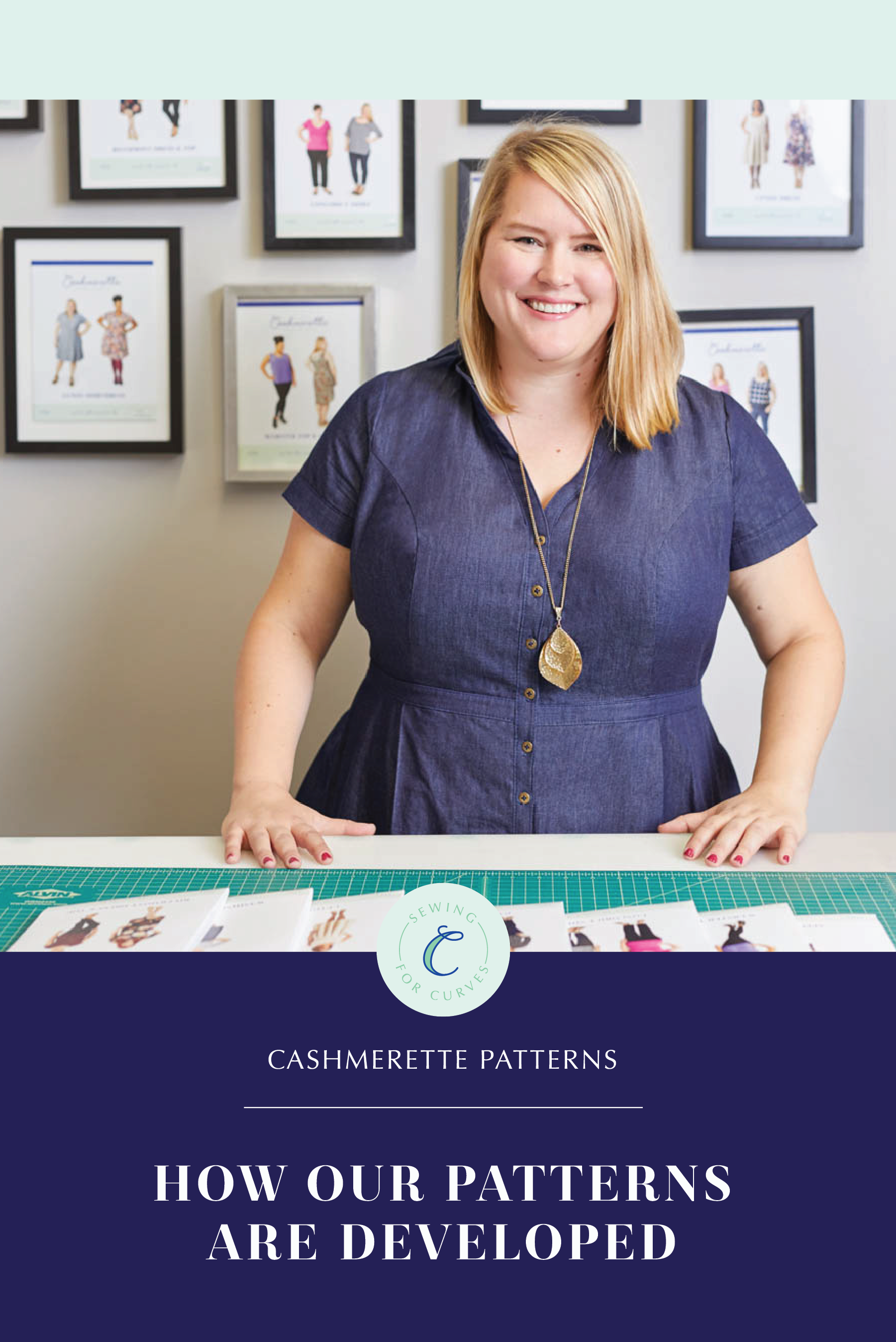 It’s a super busy time here at Cashmerette Towers, as we’re getting the next batch of patterns ready to print, and testing the batch after that… and developing the batch after that! In fact, so much is going on that I thought I might part the curtains a little bit and give you some insight into how are patterns are developed – and why you might have to wait a little longer for some of them 🙂

Every pattern company has a slightly different process, so what we do is by no means common to all. It mostly reflects my corporate background, which I incorporated into our business without really thinking about it – it’s only now that I reflect and see how similar it is! And, it’s changed over time. But the key thing is that it enables us to regularly launch high quality patterns that make women feel great, and if that’s working well, then I’m happy.

How it all starts: the design idea

I think it’s common to think that running a pattern company is mostly about designing but I’ll let you into a secret: that’s really a tiny part of it. I suspect it’s less than a week a year to do the initial development work for all our patterns, because it’s really everything else to bring it to market that takes most of our time and energy.

I decide on future patterns and design them, mostly by thinking about my needs as a plus size woman with a large bust, and looking at what other women like me are sewing, and wearing. Fashion shows? Honestly I’m basically not interested, which makes me feel like a bad “designer” sometimes. But then I remind myself that 99% of us don’t wear “fashion” most of the time – and I want to focus on launching patterns that will actually be worn rather than aspired to. 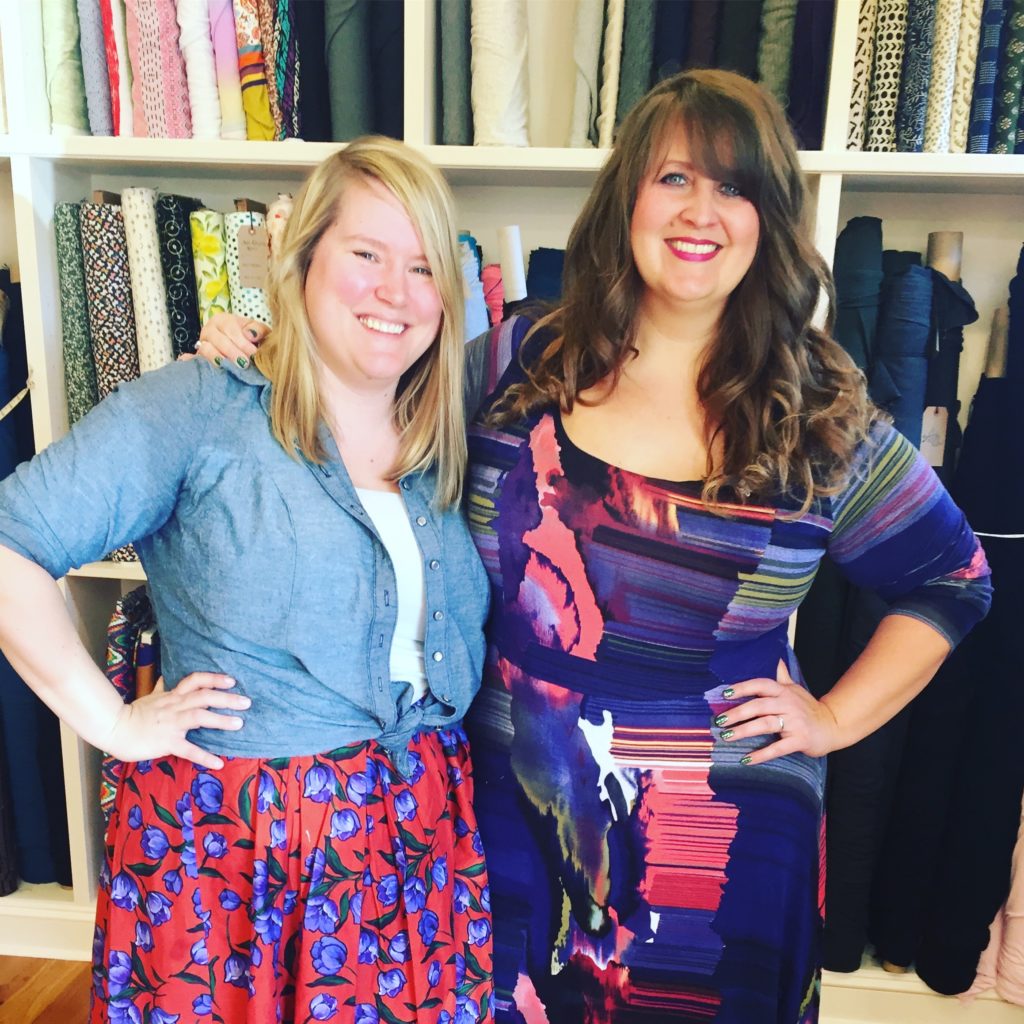 Donna and I: wearing what looks awesome, rather than “fashion”.

As we’re still a fairly new company – 2 years old next month – and we have a totally unique size approach with cup sizing up to an H, we actually have a little more leeway than the average pattern company. It doesn’t really matter if a style of pattern already exists – say a button-down shirt – because if it doesn’t fit women up to a size 28 and a cup size H, then there’s still room for a Cashmerette Pattern.

I tend to have a rough idea of the kinds of patterns I want to design (i.e. the category, like jeans, or a shirtdress) for about the following 12 months, but it does change an awful lot – just ask Carrie and Ashley who work with me and often help brainstorm! Changes typically happen based on how long something’s taking to develop and how testing’s going, which means that some things have a very long lead time before they end up in your hands.

All Cashmerette Patterns are drafted by professional, industrial-trained pattern drafters, because it’s a very advanced skill, where lots of experience makes a huge difference in quality. I communicate my design plans to the drafter, and sometimes share reference garments, or photos for inspiration. Then, they get to work. I get back a file of a first draft in our base size (the 18 E/F), and sew up a sample. The first time I did this was quite a shock to the system, when I realised there are no instructions! But you rapidly learn (and research) construction techniques, and my sewing has come on leaps and bounds ever since I launched the company. The first sample is tried on our amazing Alvaform mannequin, but also on me, as I’m close to our 18 (I’m more like the 18 G/H with a 20 waist, but we take that into consideration). Then, there are rounds of refinements. Depending on the pattern this can be anything from 2 rounds to 20! The Harrison Shirt, for instance, took over 18 months to develop, with many, many muslins in the meantime. 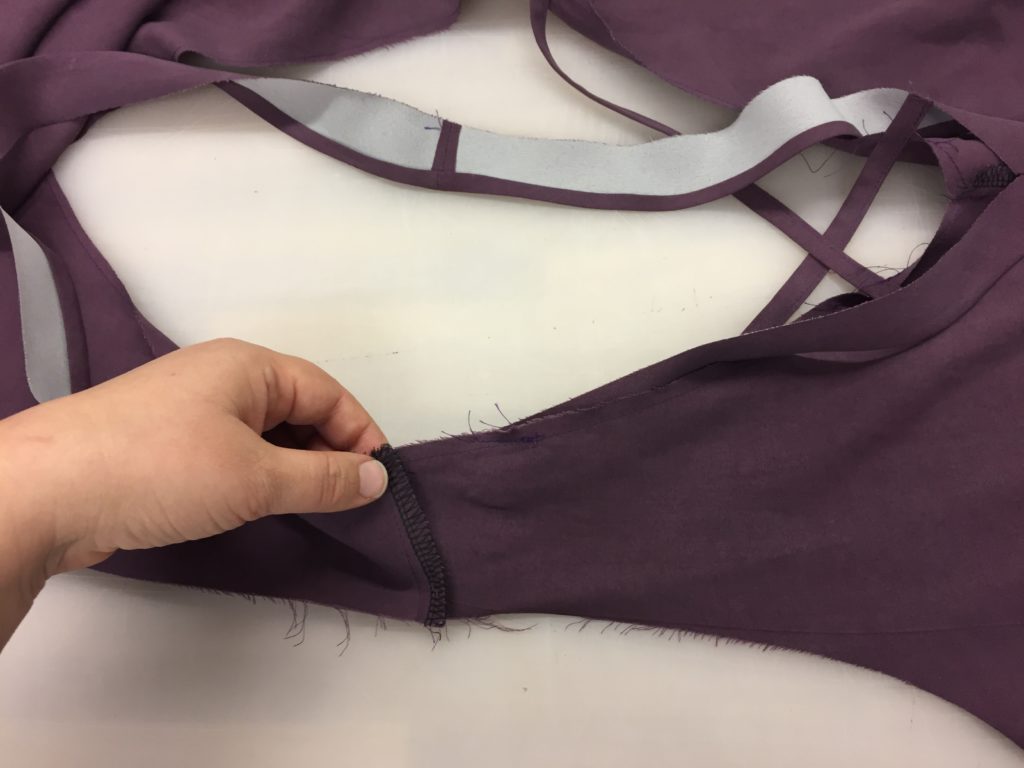 Figuring out the best way to sew the Webster Dress straps cleanly… it took ages!

Once I’m happy with the base size, the pattern gets graded. Because we created underlying “blocks” for our patterns at the very start, we use them as a reference for grading, which also means our patterns are always graded intelligently for plus size bodies – no super long arms or bizarre lengths here.

The next major step is testing, but a lot goes on between that graded pattern and being ready for testers. The pattern is sent to me as solid lines, so I work to transform them into the PDF pattern pieces you’re familiar with,  with all the various dotted lines and labels, and create the instructions in Adobe Illustrator (an incredibly steep learning curve, though I’m pretty fast these days). Carrie proof reads everything, and we usually go through a few rounds of optimizing instructions, changing the order of steps and figuring out what additional info might be needed.

Not all pattern companies test, but for me, it’s absolutely critical. Not only do I want a bunch of people to review the pattern and instructions to find errors or improvements, but I also want to get their reaction to the garment itself, how they feel in it, and how it looks on a wide variety of bodies other than mine. We use a mix of “OG” testers who’ve been helping for years, and new testers to get a range of perspectives, and it’s always a somewhat nerve-wracking time period when the results start trickling in. I take testing very seriously: if testers have issues with the pattern, we will always dig in, and refine if necessary. That’s also why I don’t require testers to post their makes on social media: these are meant to be muslins, that are likely to be refined and improved, not the final thing. If you’re not going to make changes after testing, what’s the point in testing at all? 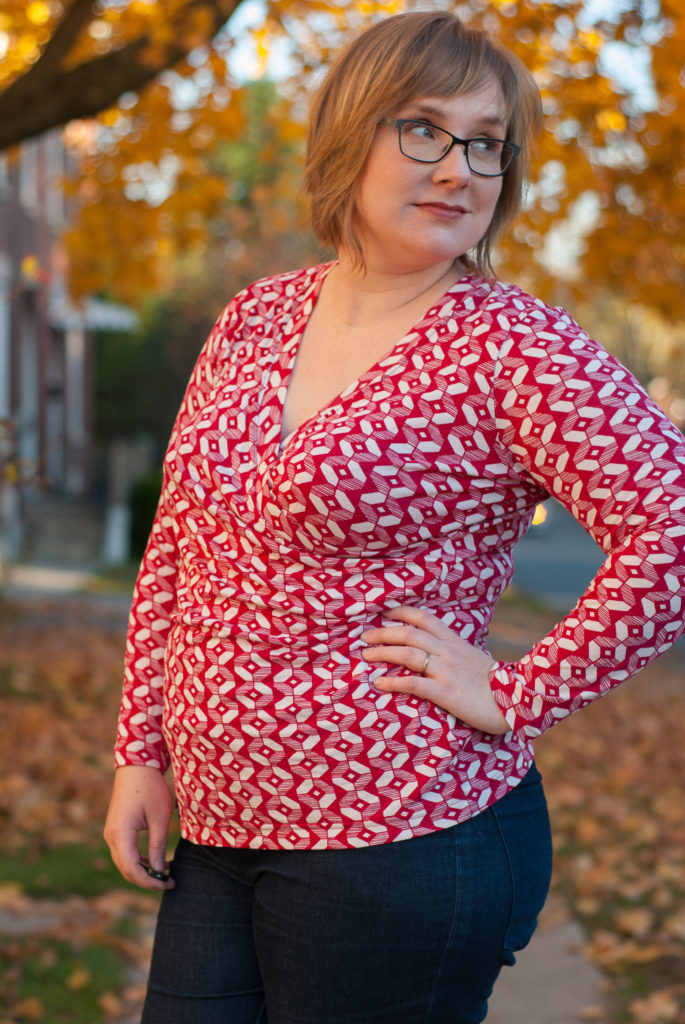 I’m fine with selfies, but Gillian has amazing tester photos! (the pattern changed a little bit after this pic was taken)

Most patterns go through one testing round, but trickier ones may have multiple rounds. An upcoming pattern just entered its third testing round! Ultimately, it’s more important to get it right than do it quickly, which is why you will often see a few simpler patterns coming out before a more complex one.

After testing, we make the changes needed to the pattern and instructions, and then work with our graphic designer to get everything laid out in a clear way that’s consistent with our branding. It’s also photoshoot time! Somehow we ALWAYS seem to be in a rush by the photoshoot, between sewing up samples, recruiting models, co-ordinating photographer and hair/make up artist schedules and getting everything to the studio, but it’s always a rewarding, if intense, day. 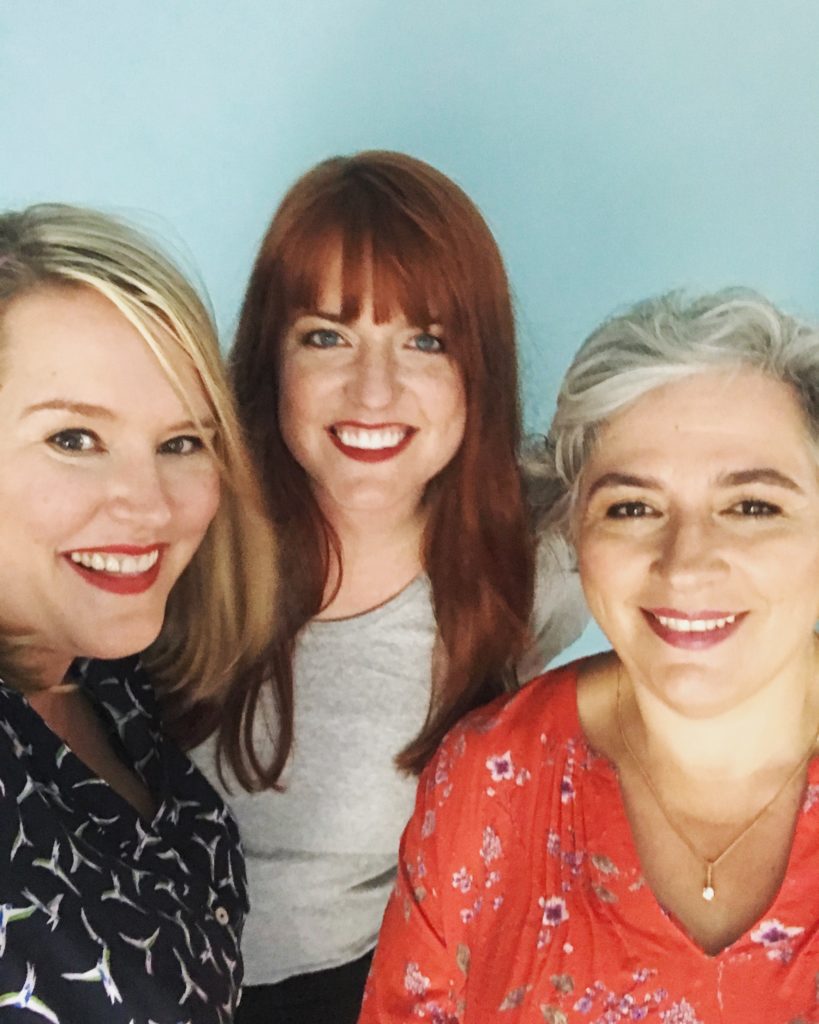 Behind the scenes of our latest shoot!

Right now, we use non-models, who are often customers of ours, and it’s a joy to not only see them looking beautiful in our clothes but also feeling super confident, and in many cases, doing their first photo shoot! We’re actively working on increasing our diversity across multiple factors, so look forward to seeing some incredibly beautiful women coming up. 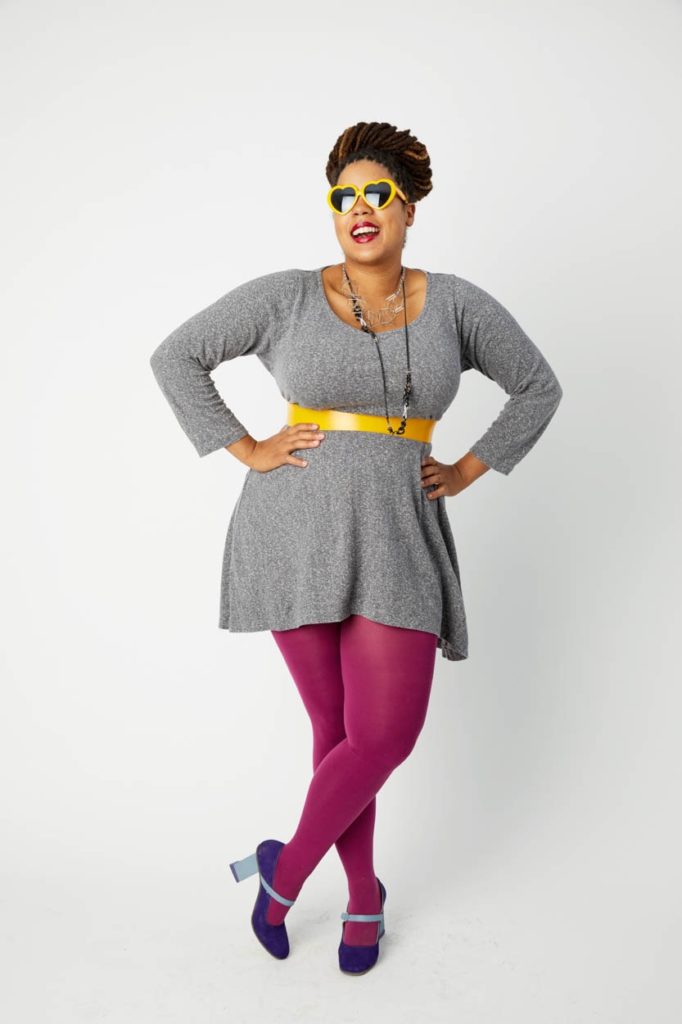 Model Rachel (who I randomly approached in a bar) = badass

Once the envelope, instruction booklet and pattern pieces are ready, it’s off to the printers. We have separate printers for the envelopes & instruction booklets, and the pattern tissue itself, and then get sent back to us where we assemble the printed patterns by hand in our studio. I create the PDF versions, both for print at home and copyshop, and get those ready too. 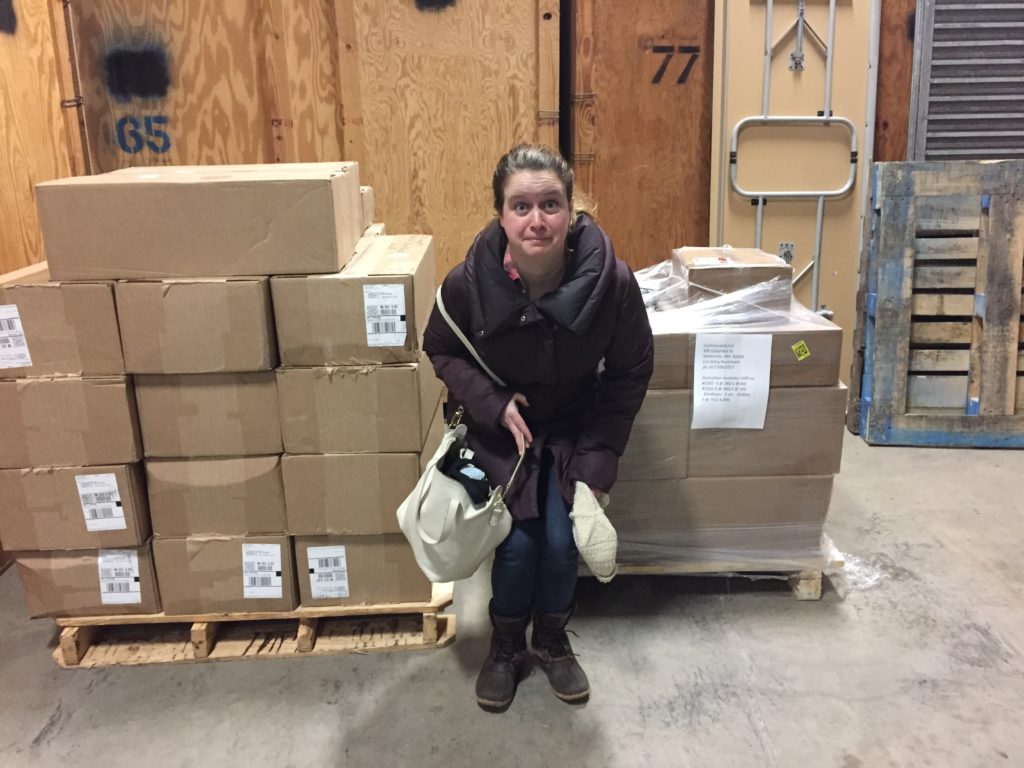 Carrie’s favourite time of year: her “we have carry all these boxes up the stairs?!” face

I try to create patterns in batches (it’s efficient and saves us money), but we launch them over time rather than at one go, and there’s still a bunch of work to do once everything’s in the studio. We have to edit photos, create the store listings, upload the PDF patterns to our automatic-fulfillment app, write the blog post and announcement email, send a pre-order email to our retailers and distributors, an announcement to our media contacts, and prepare everything for social media. It’s always a bit of a whirlwind! 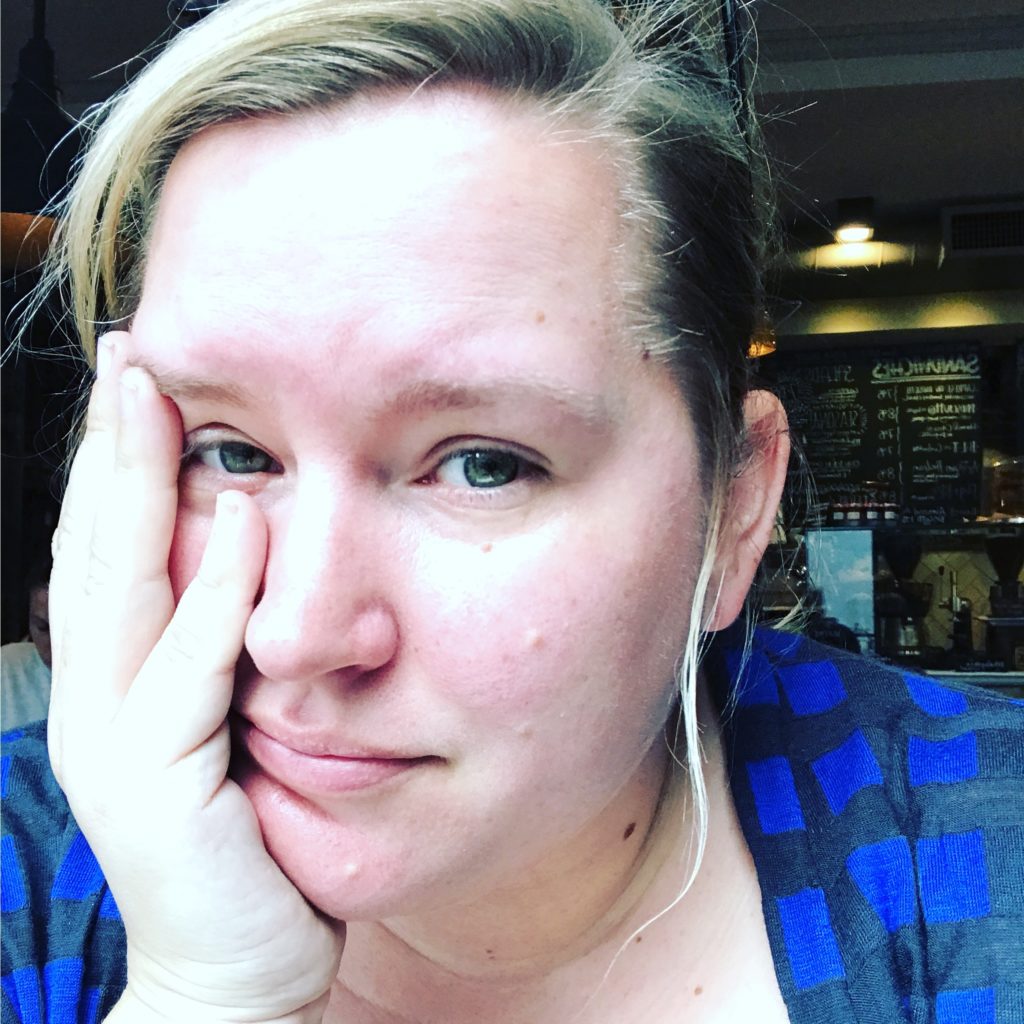 And then it’s launch day! Always exciting, and have no doubt: I spend the entire day refreshing my phone and computer to see your comments and the orders coming in. Spending so long on a pattern – usually at least 6 months – and then finally releasing into the wild is always emotional, and I’m always nervous to see the reception and then really pleased if (when!) it’s positive. It’s the end of a huge amount of work – but there’s always the next pattern coming up right behind it. 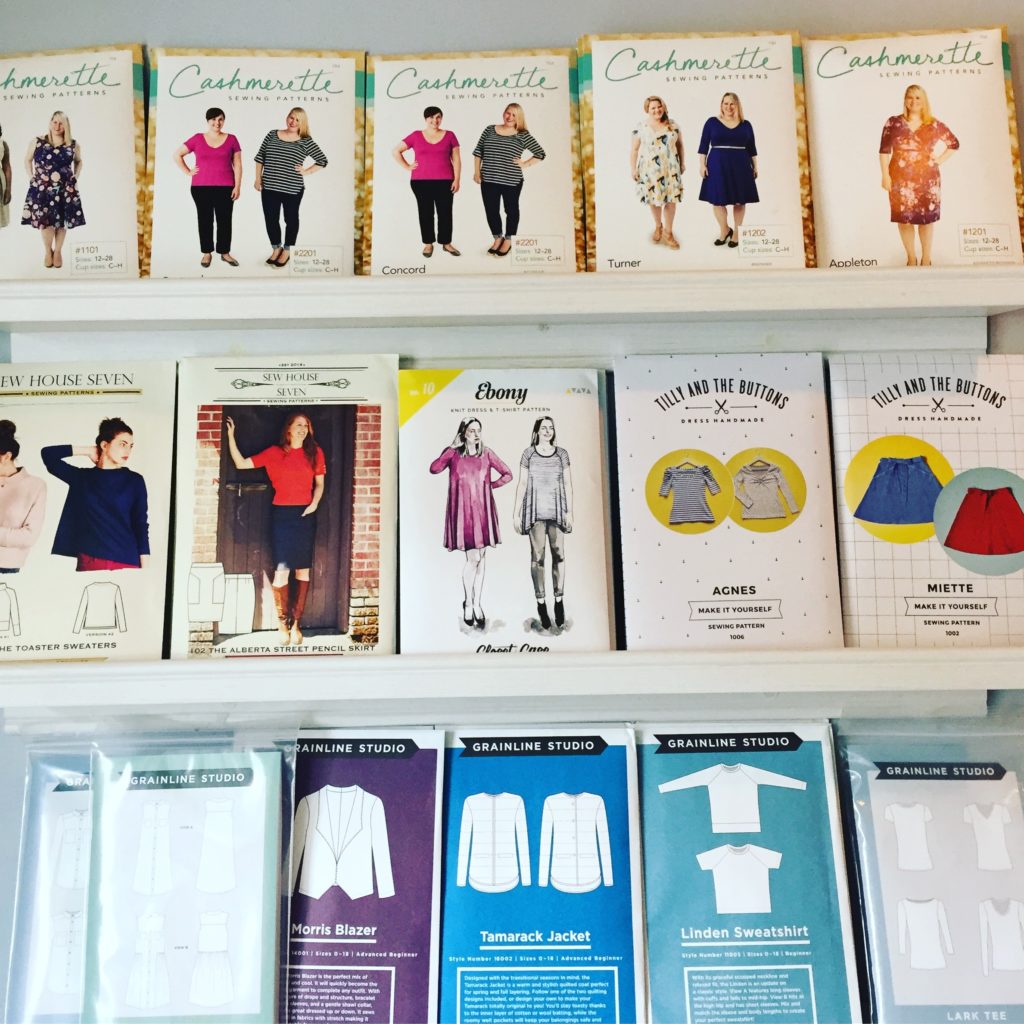 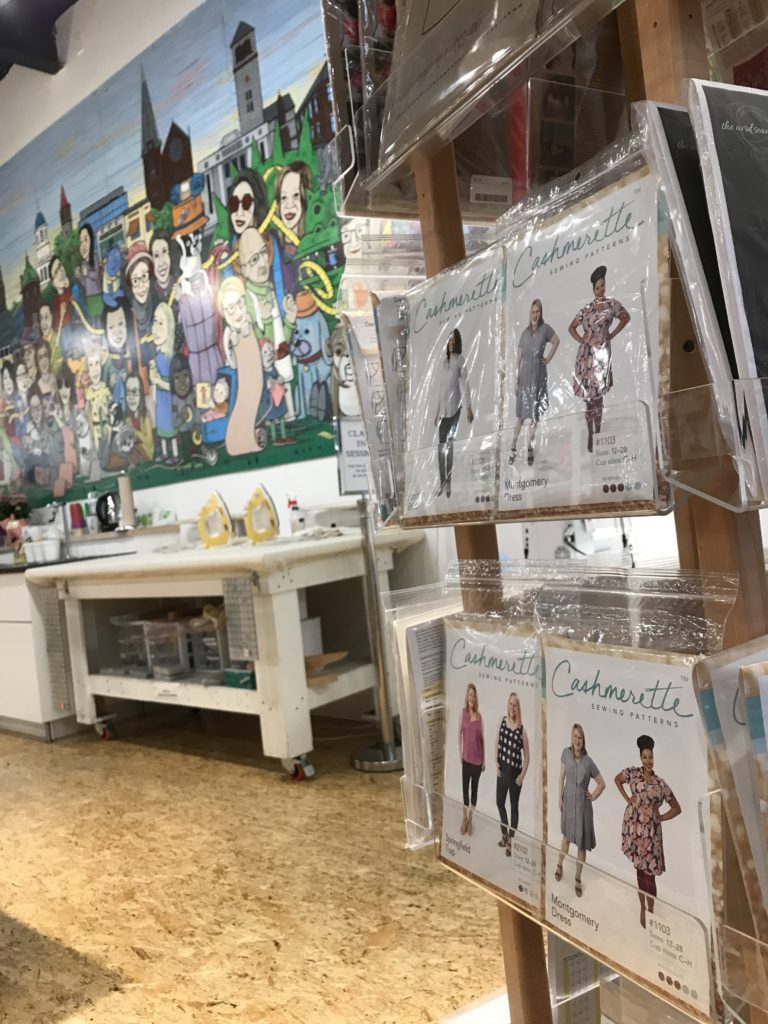 I will never not be amazed at seeing our patterns on shelves!

So that’s us! There’s a team of nearly 10 people who work on getting Cashmerette Patterns from random ideas in my head to patterns in your hands, and they’re all essential to the process. It’s definitely hard work being a full time small-business owner, and there are moments when I’m creating website banners at 11pm and pondering why I left the corporate life.

But you know what? I’ve never regretted it, for a minute. Launching Cashmerette Patterns has been my life’s work and I’m absolutely thrilled to have created something with an amazing team, and to see the reactions of our customers when they feel incredibly confident and radiant in a brand new garment. It really makes it all worthwhile.

Do you have any questions you’ve been dying to ask about how we launch our patterns or run our business? I’m an open book!

39 thoughts on “How Cashmerette Patterns are developed”

Sign up for our newsletter and you’ll receive exclusive offers, curvy sewing news, and 10% off your next purchase.
END_OF_DOCUMENT_TOKEN_TO_BE_REPLACED