Just in time for all my undercover sleuthing needs: a tan McCall’s 5525 trenchcoat! It’s a classic for a reason, folks. I have a fantasy of a wardrobe full of a rainbow of trenchcoats, but decided that I’d start with the workhorse classic, beloved of Burberry et al. 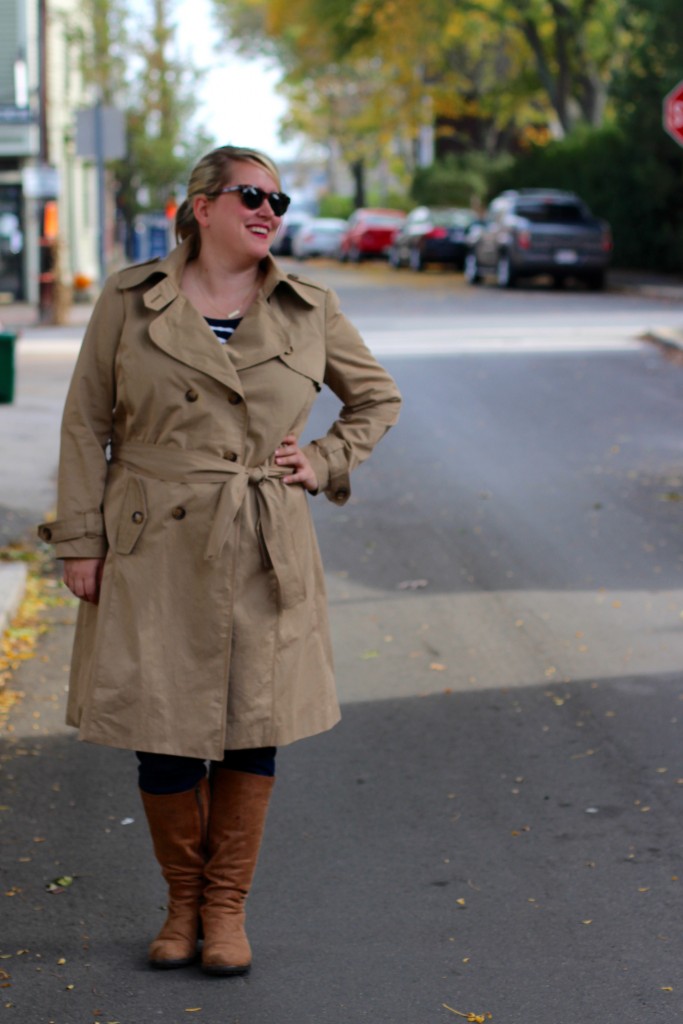 This McCall’s pattern is a traditional trenchcoat, with all the bells and whistles you associate with the style: enormous collar, shoulder flap thinggummy-jig, cuff latches, back buttoned cape whatsit and tons and tons of topstitching (apologies for all the technical language folks, a true professional is speaking here). I went with View E (the pattern has some truly… “alternative” alternatives) and added the weird shoulder flap thing in for fun. The main reason I chose it over the trendier indie alternatives was the sizing, as this is a rare pattern that actually comes in true plus sizes, even though it’s still drafted for a small bust (boo). I went with a “straight” 22W which I knew would give me a decent amount of ease. I’m not sure whether that was the right choice – I feel a little swamped in it, and I’m wondering if I should have made the 20W with an FBA. But I hate princess seam FBAs… so. Who knows. 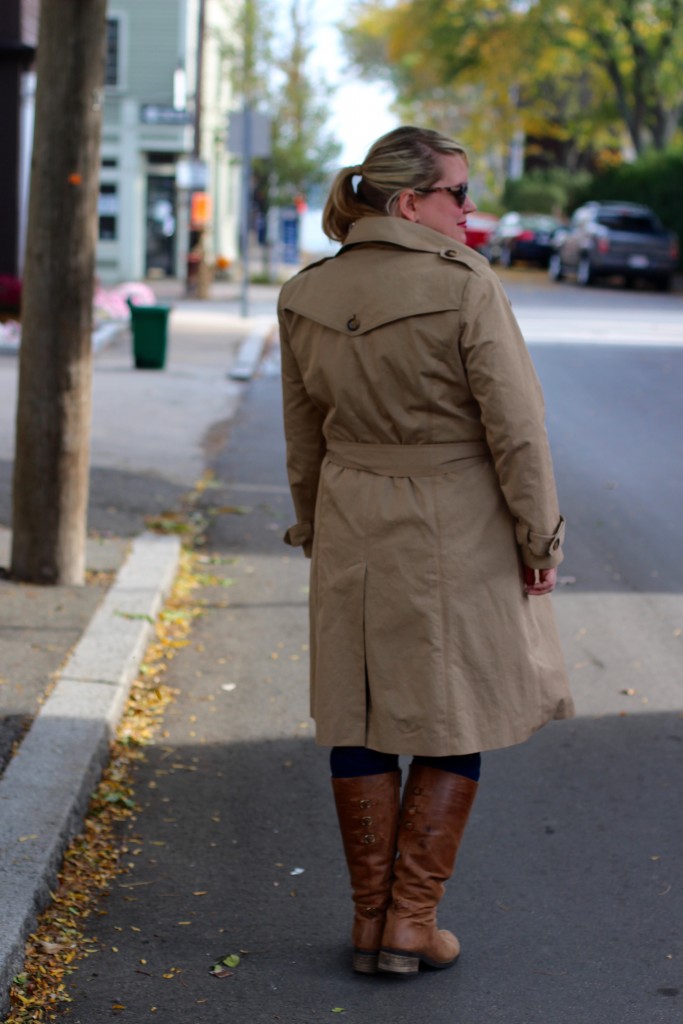 When I was in London I assiduously spied on the thousands of women on the tube who were wearing trenchcoats, and scoped out what I wanted to add to the basic pattern (talking of which, I’ve got a separate post coming on fun additional things you can do to coat patterns). Two jumped out at me: that I wanted triple topstitching, which contribute a certain trenchcoat je ne sai pas, and channel stitching, where you sew lines of parallel stitches to add rigidity to a piece and make it look cool. The triple topstitching is much in evidence on these photos, though unfortunately I didn’t get much on the channel stitching which was mostly on the pockets and undercollar. 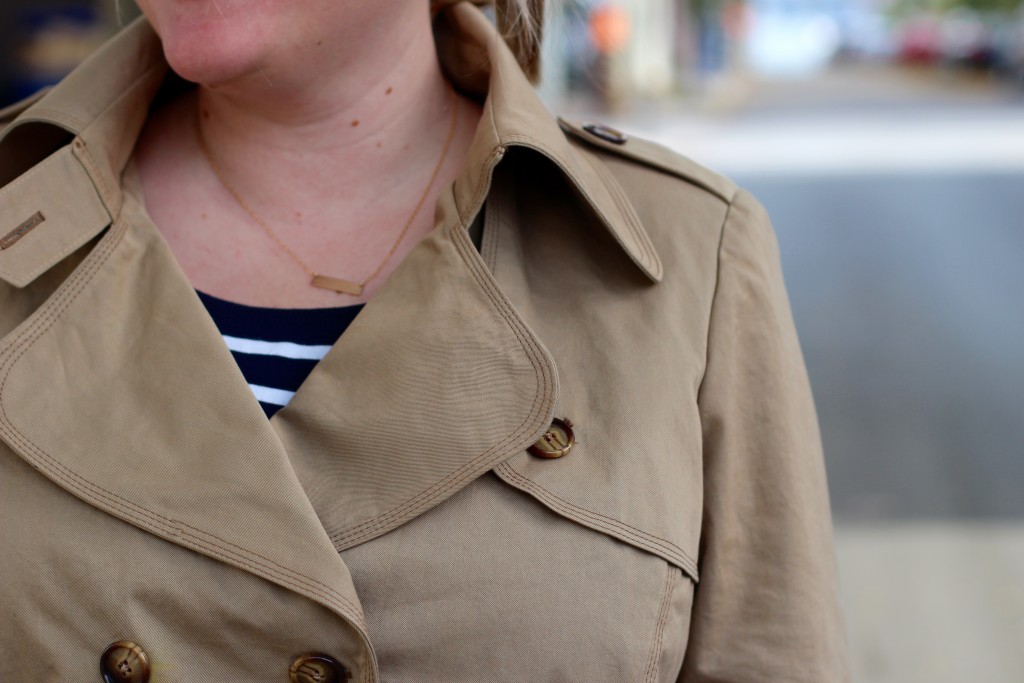 I’ll confess: the topstitching was hard! I used an edgestitch foot which is my #1 best friend, but it still meant being very, very careful and trying to stay parallel. Did I do it perfectly? No I did not. Did I rip out and re-do the princess seams 8 times? Yes, I did. But in the end, I think it’s passable, even if the ladies at Dior would faint on the spot. 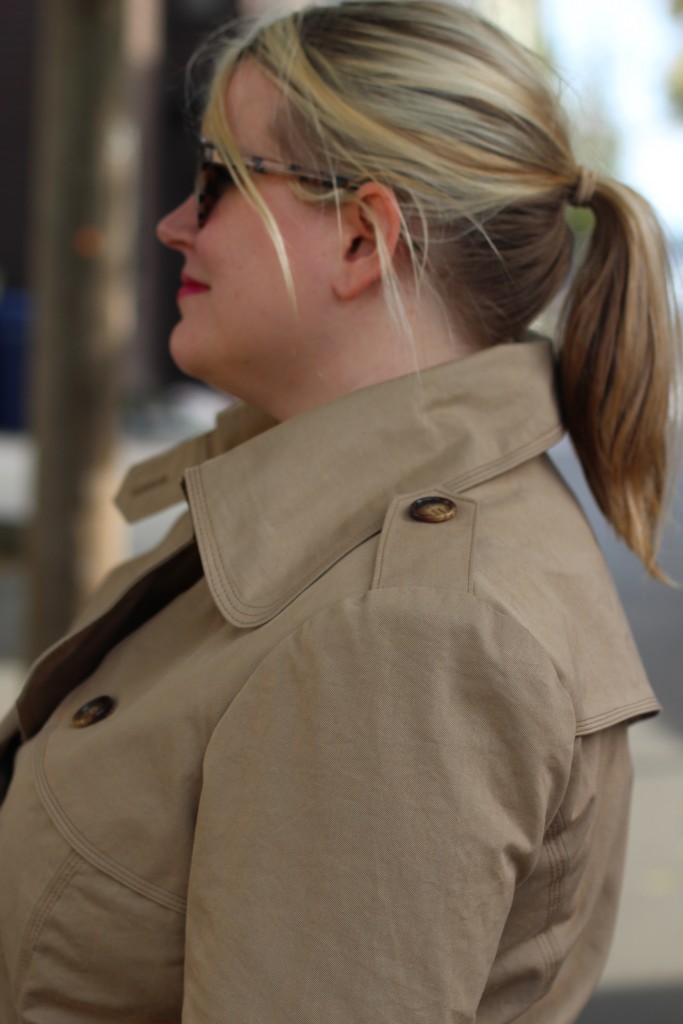 Check out my cape, Mum! 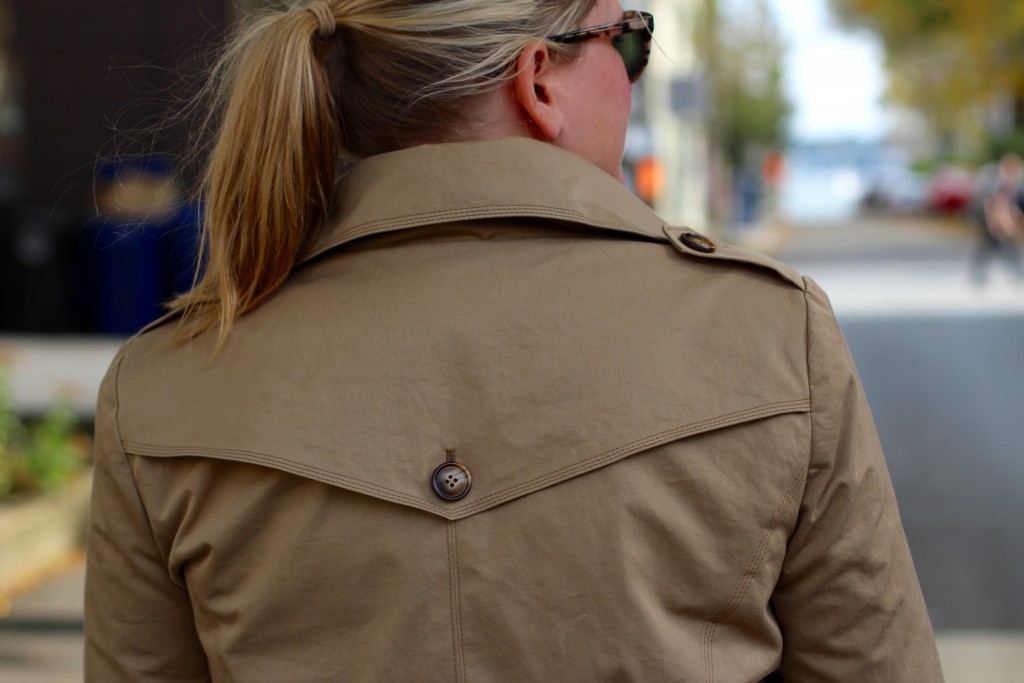 One really bizarre thing about the pattern is the length of the cuff latches – I already shortened them by 3 inches and they’re still a solid 2 inches too long and keep catching on things. Might have to go back in and shorten them. 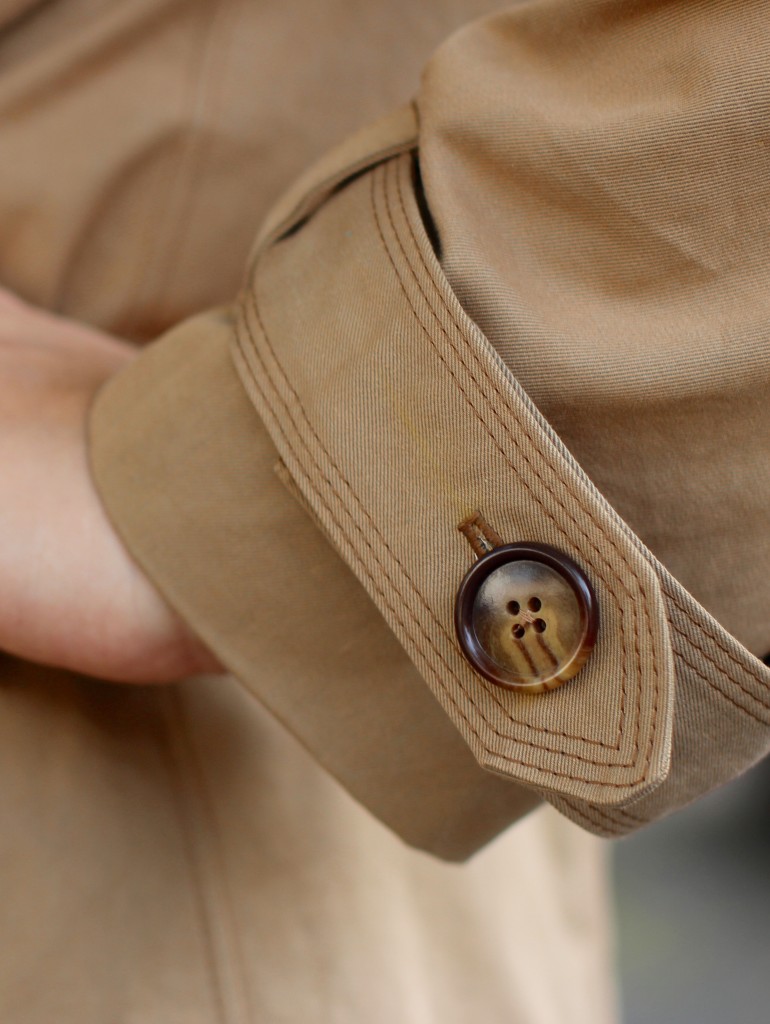 For the main body of the coat i used this Theory “candied ginger” cotton twill from Mood, with buttons from Wawak, and this lovely Liberty silk satin from the crazy cheap Liberty shop in London. Alas, I didn’t have enough lining to print match, but I won’t tell if you don’t. For fun, I added a little electric blue bias tape between the lining and facing for a wee pop. 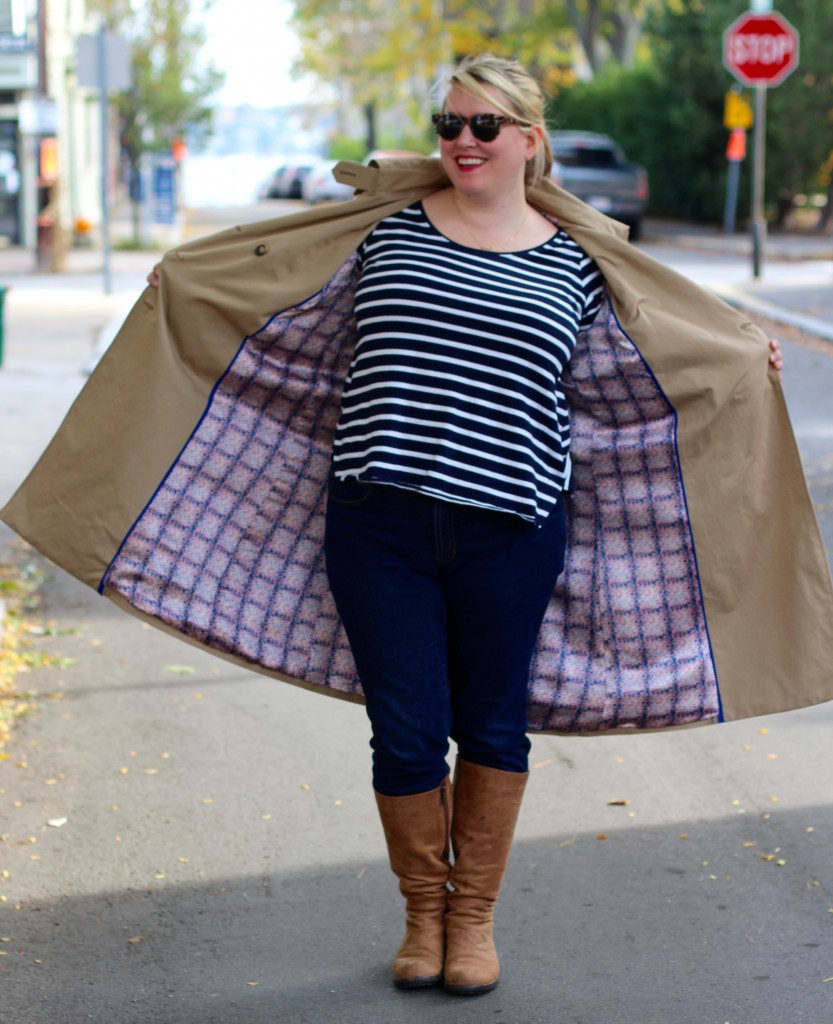 So there we have it, a classic trench for the coat wardrobe (adding to my beloved Grainline Cascade duffel coat and massive collar coat, and my… less loved green coat). I’m not used to wearing double breasted coats so I do feel a little swamped in it.. We’ll see if I ease into it. I have some amazing Loro Piana waterproof coating from EmmaOneSock from ages ago so I need to decide whether it should be a trench or something else… Decisions, decisions! 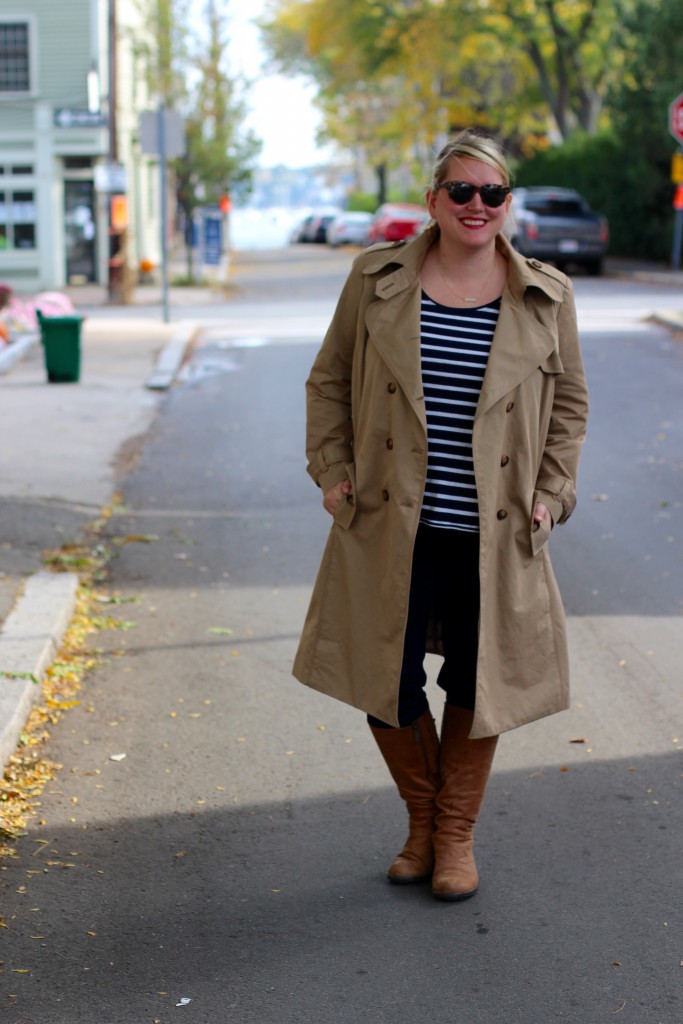 Are you a trench fan? Have you tried any other patterns? And anyone want to join my new Private Detective agency? No seam allowance left unexamined!

Sign up for our newsletter and you’ll receive exclusive offers, curvy sewing news, and 10% off your next purchase.
END_OF_DOCUMENT_TOKEN_TO_BE_REPLACED