Without a doubt, my favourite thing about blogging is meeting other bloggers in real life. It never fails to boggle my mind that I have these friends all around the world who I’ve never met… and who invariably turn out to be just as cool in person as they are online. When I decided to travel to Tokyo, my first priority was a visit to my blog roll to see who I knew in the city, and Novita (Very Purple Person) and Yoshimi (Yoshimi The Flying Squirrel) were top of the list! 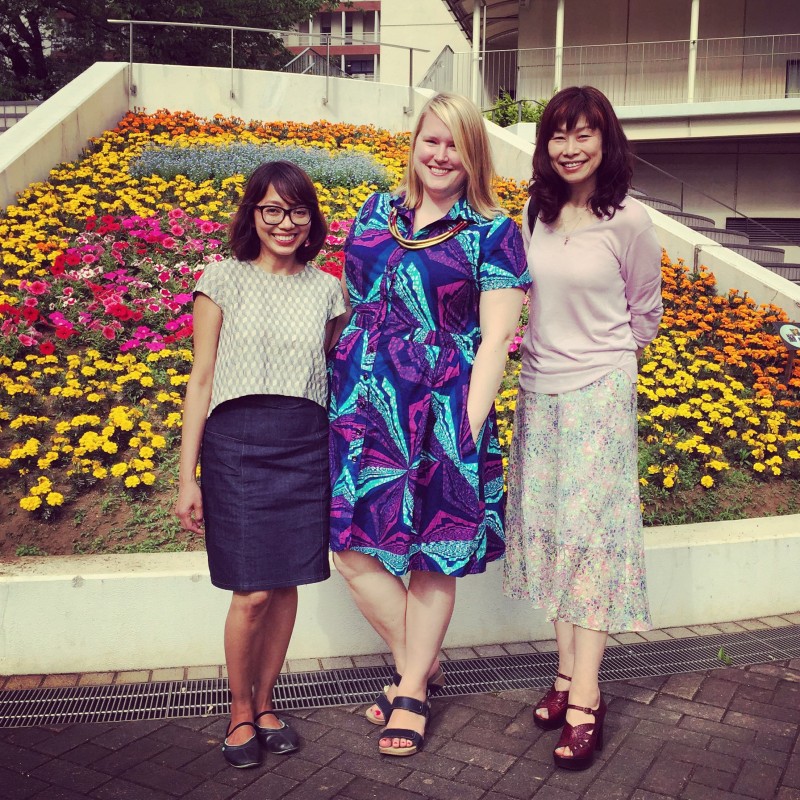 We met on Thursday at Shinjuku station, and the first port of call was heading over to Bunka Fashion School, guided by Yoshimi’s friend who is a graduate of their pattern-making course (and who was wearing a very nifty combo including a collar made of tiny linen rags and a Merchant&Mills UNIQLO t-shirt). I couldn’t get over how big Bunka is – it’s literally a skyscraper! 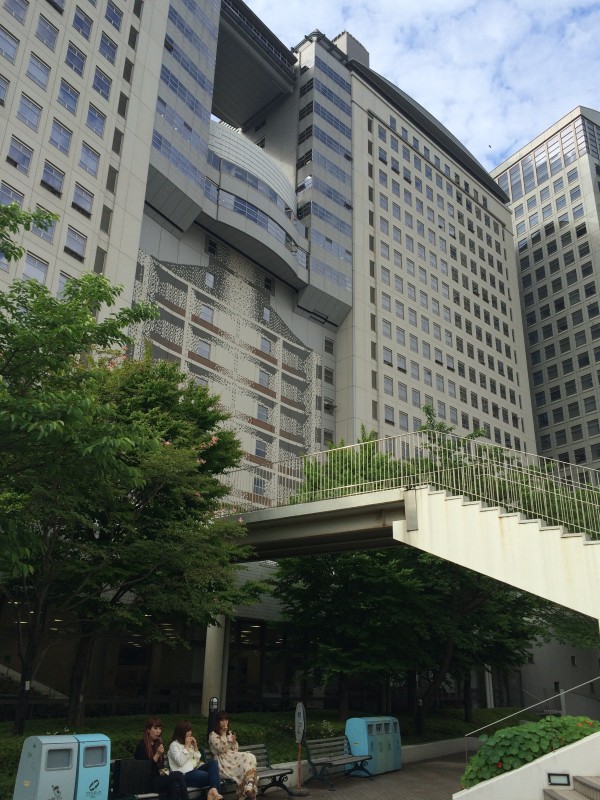 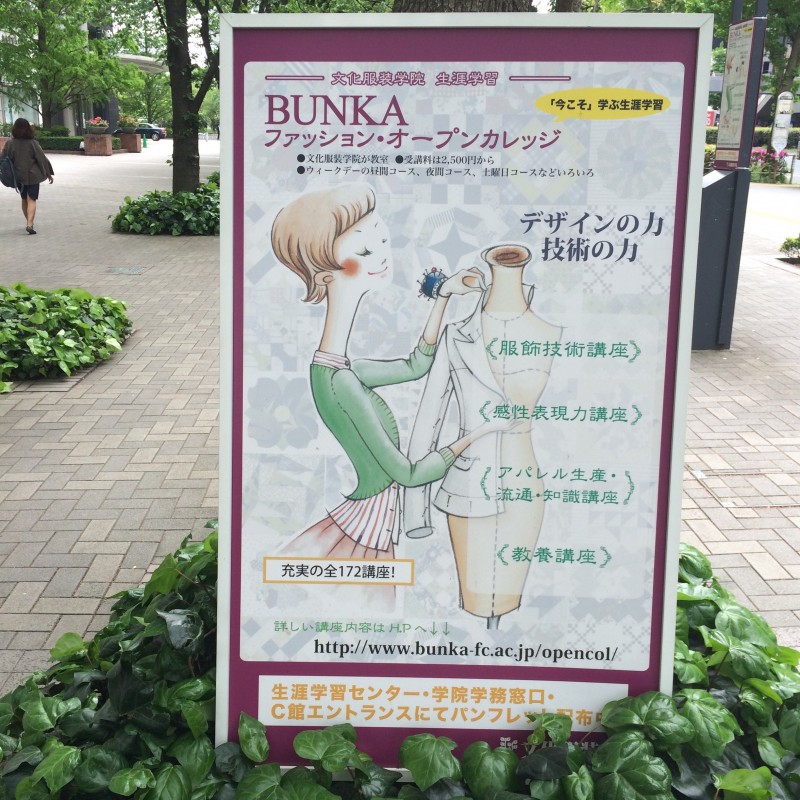 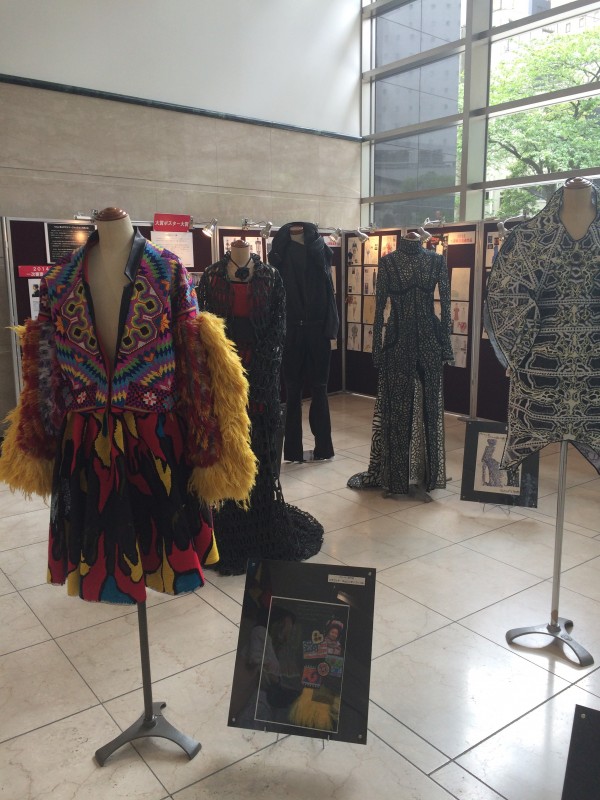 There are all manner of facilities there, but naturally we checked out the shopping options first – they have a bookstore, fabric store, and notions/equipment shop.

In the bookstore Novita found me my first ever Japanese pattern book – for plus sizes! Interestingly, I noticed a lot more plus size women in Japan than last time I was here 6 years ago, and there are also now pattern books and fashion magazines. My book is “Pocchari Girls’ Sewing Book” which apparently means “chubby girls”, but, I was told, with a nice tone (apparently there’s also a movement to rechristen plus size women “marshmallow girls”….). The clothes are pretty cool and styled in a very fun Japanese way, even though they’re modeled by western women. They definitely tend in the tent-dress direction, but in a similar way to straight-size Japanese fashion which tends to be loose-fitting, rather than in a “these ladies need to cover up” way. I’ll do a full review of the book soon! 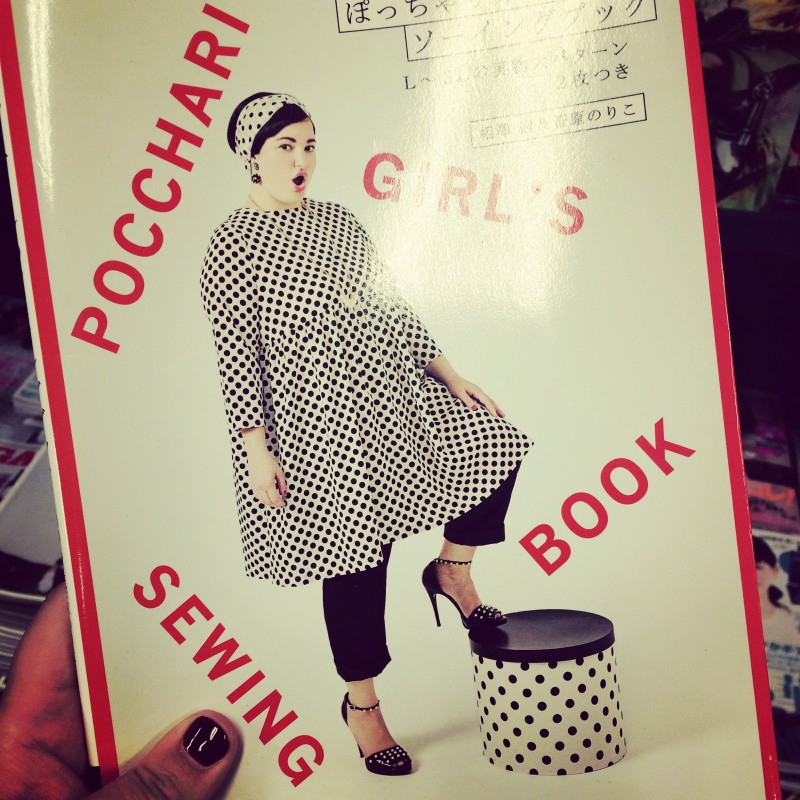 I took a quick look in the fabric store but it was mostly wools and fabrics for men’s suiting – I presume that reflects the classes they’re teaching at the moment. 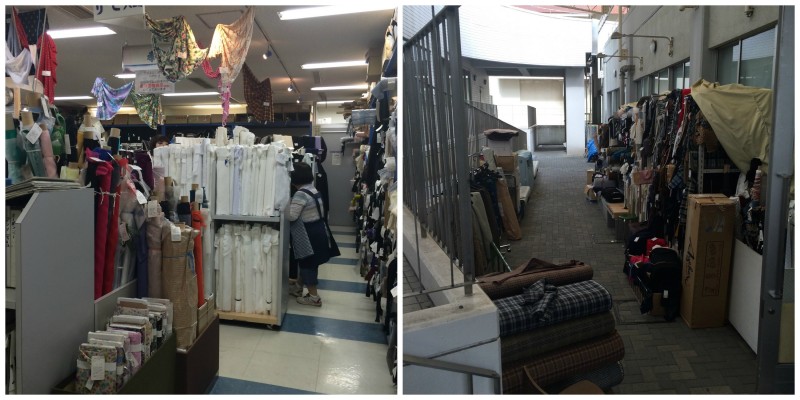 The notions store though… swoon! There’s no doubt that seeing regular things with Japanese packaging makes them seem cooler, but there were also a lot of things that I haven’t seen in the US or Europe – like twill tape in a dispenser, tiny Japanese needles and pre-made bra strap holders. I bought one of the curved rulers (apparently the curve is famous…), and some chalk with “Bunka” on it… because. 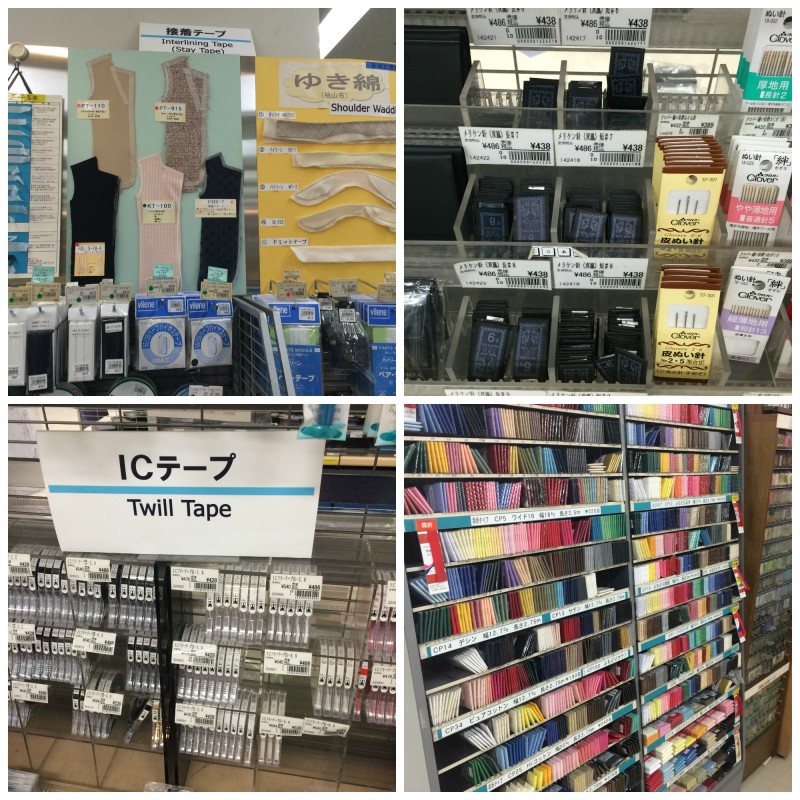 We saw the famous Bunka mannequins– apparently every year, they take the measurements of the incoming students, and create a mannequin that’s an average of the class. As a result, their forms are well-known for being a lot more reflective of real women’s figures than standard Wolf or Dritz models. 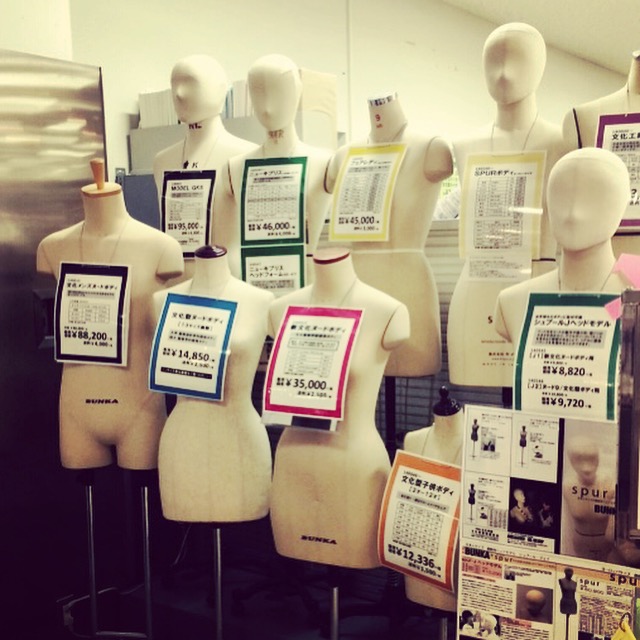 After the Bunka stores we popped into the Bunka Garment Museum – they have a small permanent collection of 1920s – present clothing which was fun to ramble around, and then downstairs there was a temporary exhibition on denim. It was fascinating, both to see how little denim styles have changed since the early 1900s, but also because they have an awesome video which shows how commercial jeans are weathered and wrinkled using sandblasters and lasers. 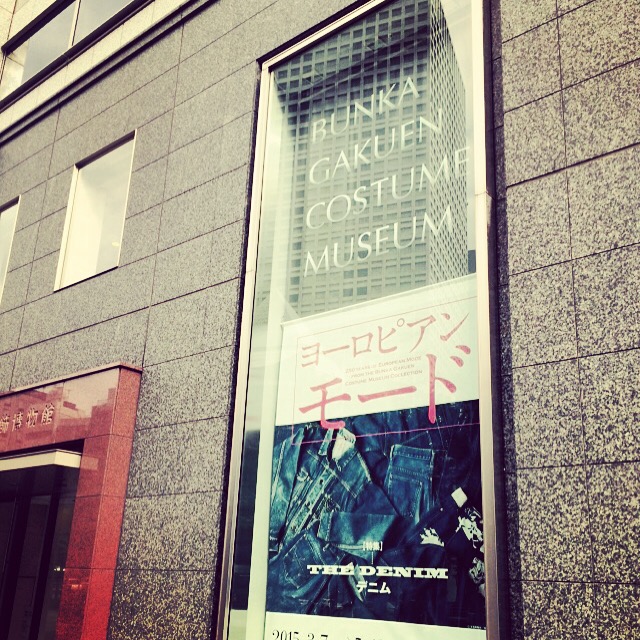 Next, we headed out to a store called Yuzawaya which is above Shinjuku station (all the best things in Tokyo are apparently above or below stations..). It has a massive variety of craft supplies, from stained-glass window making to leather kits to dried flower decoupage to fake fur trim, and of course I was so swayed by the packaging that I almost bought a needle-felting kitty set. And about 100 other things. Instead, I limited myself to some knit bias tape – I’d heard rumours of this before but never seen it myself, and given it was polka dots I was basically obliged to buy 8 packs. Yoshimi and I also picked up some limited edition Hello Kitty Liberty print for Carmen – see if you can see the kittens! This is a great store for Liberty, printed cottons, and more notions than you could dream of, all displayed in a really beautiful way. (If you can’t make it to Japan, Miss Matatabi has a lot of very similar stock and ships worldwide…) 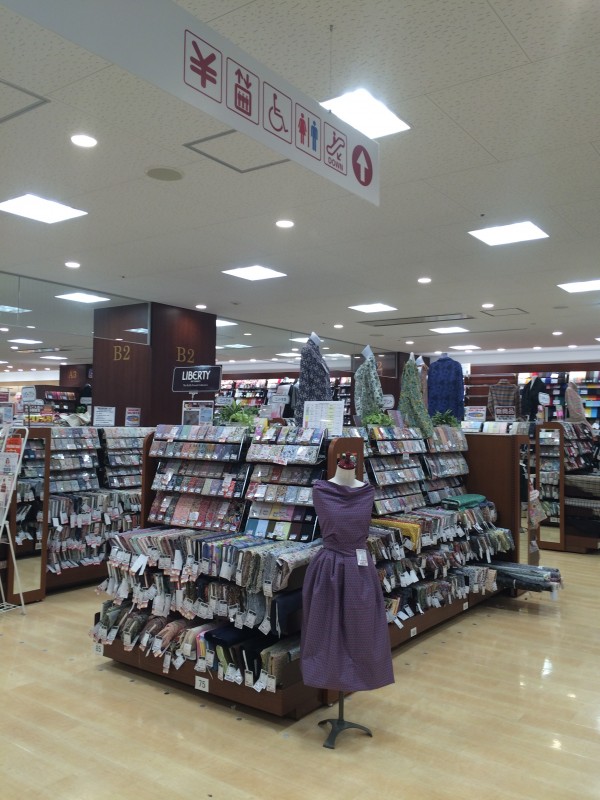 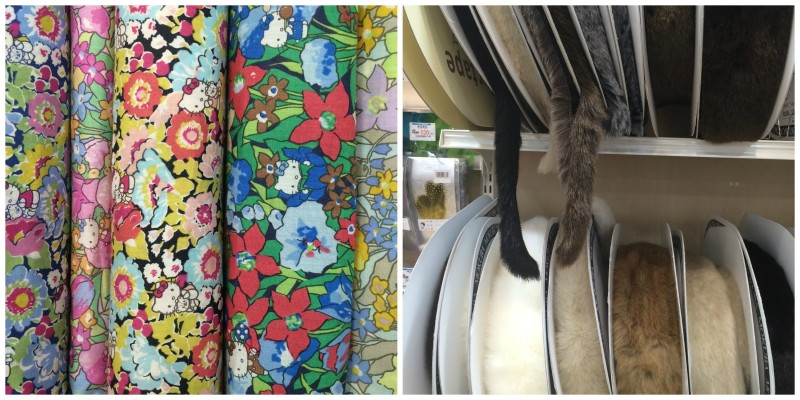 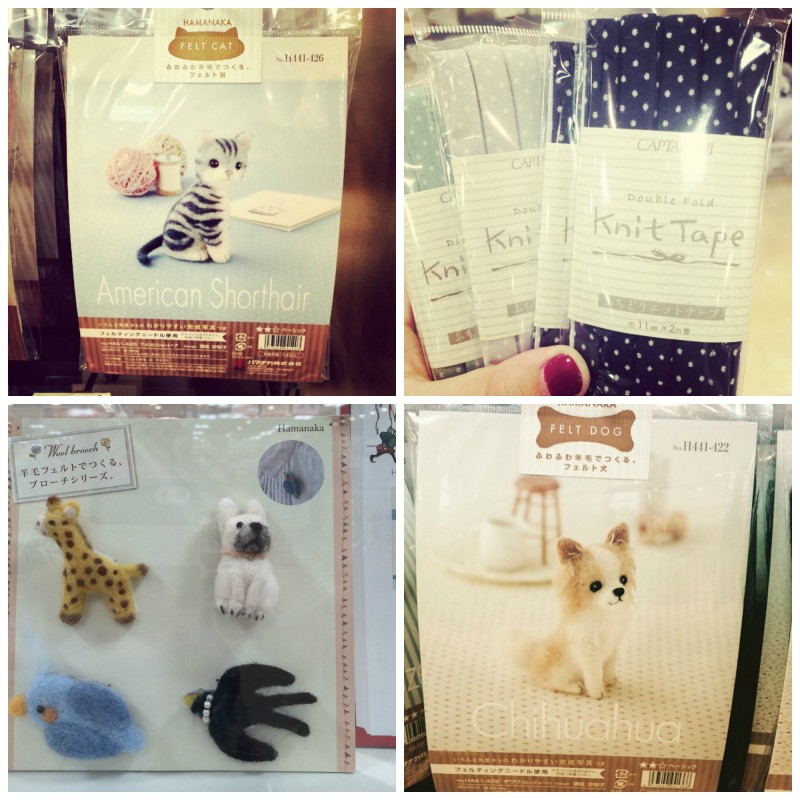 I also did a pre-game mini-visit to Odakaya in Shinjuku. It’s a little hard to find (the entrance to the fabric part of the building is down an alleyway) but it was another gem. They have a particularly good selection of sweater knits – I ended up buying a lightweight black and royal blue square knit which will be perfect for a cardigan or light sweater, and had to restrain myself from buying the various quilted and cabled sweater knits which, though gorgeous, were really expensive ($30+/meter). 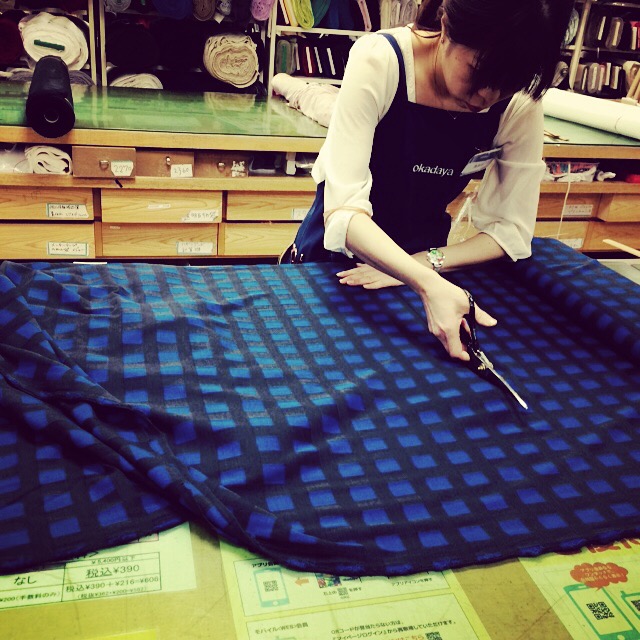 Post-shopping we headed out to the suburb of Kichijoji for some okonomiyaki dinner. Okonomiyaki is one of my favourite Japanese dishes – it’s a sort of pancake made with cabbage and eggs, which you add lots of things to like seafood, pork, little crispy bits of batter, cheese and so on. At the cute place we visited there’s a hot-plate on the table so you make your own, though we did have rather a lot of guidance from Yoshimi! Once it’s made you slather it with a sweet soy-based sauce and mayonnaise, and flaky dried fish bits on the top. It’s the best! I might have to start up a chain of okonomiyaki restaurants in Boston… 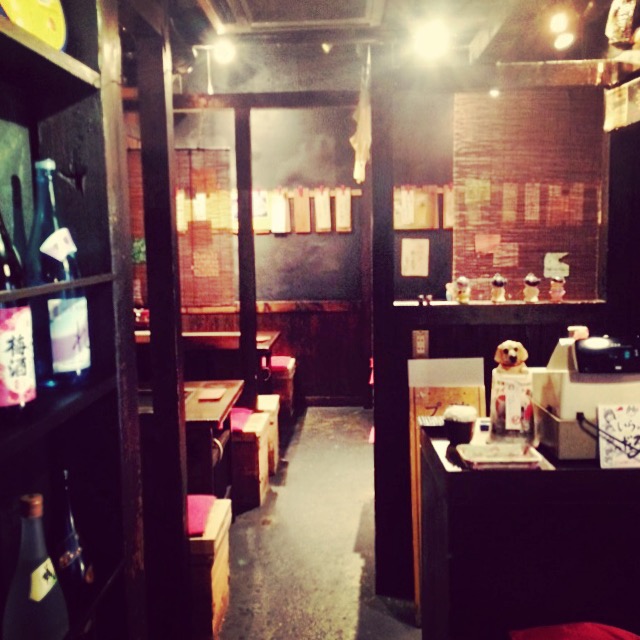 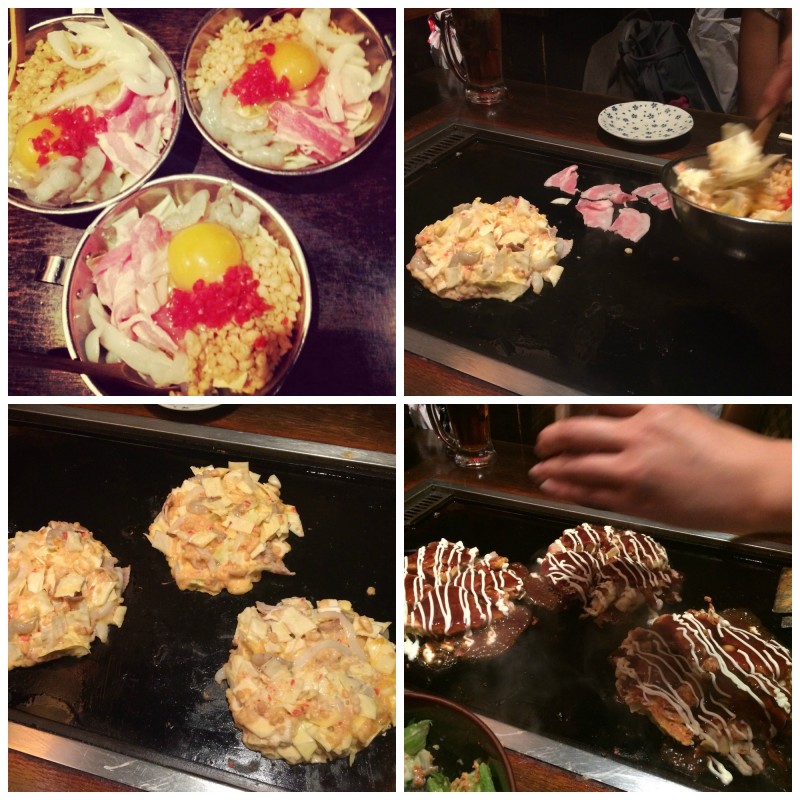 All in all, a totally awesome day, thanks to Yoshimi and Novita. I’m hoping to see them again soon, either in Japan or New York! Now, on to Takayama and Kyoto… Does anyone have any tips, fabric, food or otherwise? And: should I just suck it up and buy another suitcase and buy all the fabric in Japan? I might break my back carrying it all, but..

Sign up for our newsletter and you’ll receive exclusive offers, curvy sewing news, and 10% off your next purchase.
END_OF_DOCUMENT_TOKEN_TO_BE_REPLACED