Many, many, things. Actually: most things. You certainly won’t see me on a race-against-the-clock sewing TV show, because I would undoubtedly sew everything upside down and back to front, and I’m not sure I could get away with claiming it was avant garde, even with the useful tool of my cute accent* (* only works in America).

And yet, I find myself doing it. After a few weeks of making very slow progress on my Grainline Studio Cascade Duffle Coat, I decided to sprint for the finish and spent all of Saturday making it and Sunday morning bagging it. So…. 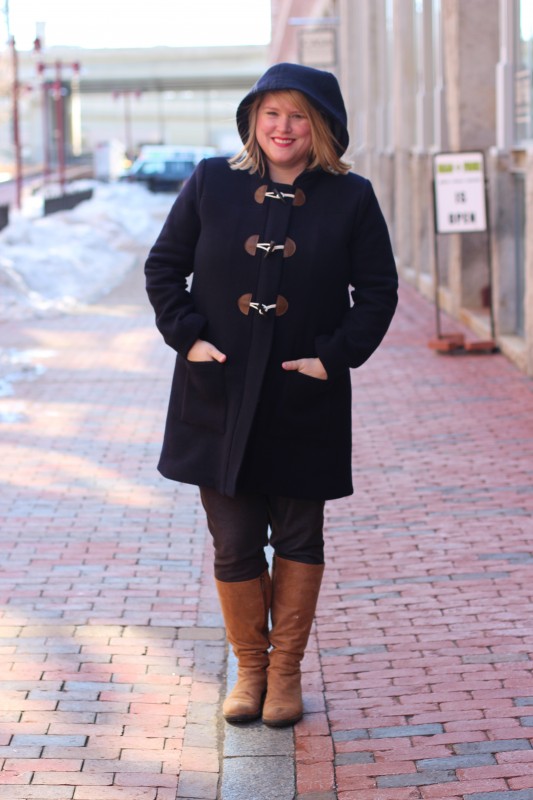 Ag! I’m in love! As I mentioned previously, I’ve been after a navy blue duffel coat with white cord for aeons and I finally have the one of my dreams. The wool is an absolutely gorgeous double-cloth fleece beauty from Mood – I don’t generally have great luck buying online from them, so I ordered swatches and this one leapt out. It has a fantastic hand, drapes nicely and is deliciously spongy. 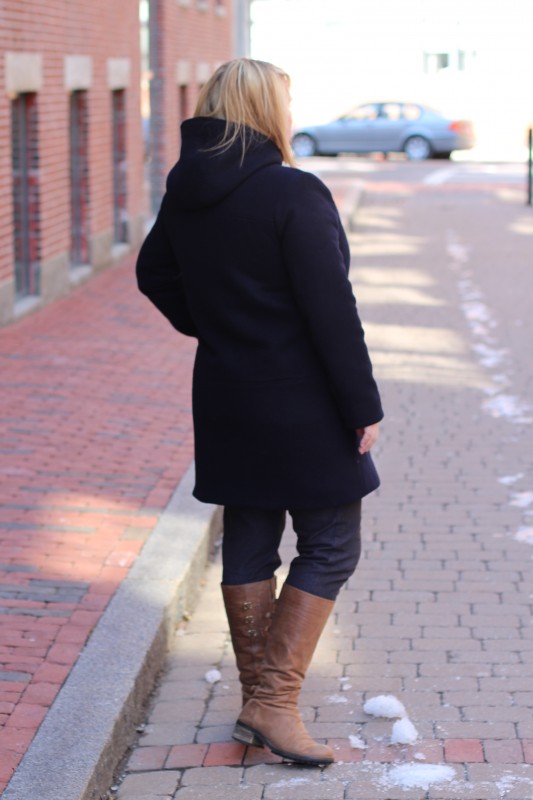 I paired it with midnight blue Ambiance lining, and peeks of plaid (more on that below).

Theoretically I’m outside Grainline’s sizing, but when I looked at the finished measurements I realized I’d be OK thanks to the ease – and indeed, this is a straight size 18. Obviously there’s a lot less ease in the bust than called for but actually it’s just the right amount for me. Although I didn’t alter the pattern, next time there are two things I’ll do. First, I didn’t realize the hood is also graded up until after I’d made it – my bust may be a lot bigger than a size 0 but my head isn’t (!) so next time I’ll grade from the 18 at the neckline to a smaller size. Until then I can smuggle squirrels in my hood. Second, the sleeves run a little on the short side – I did a really small seam allowance for the sleeve facing but probably could have done with another half inch. Apart from that, the pattern is a dream – all the notches match, the instructions were straightforward, and I love the styling and details. 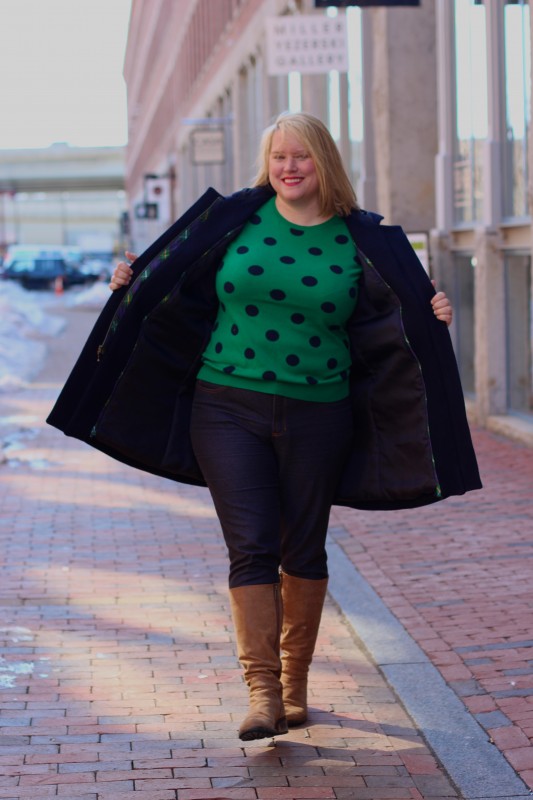 Talking of details, let’s jump in! After extensive pondering and community consultation I went with a light brown/bronzy leather colour and made my own toggles using 2.5 mm off-white waxed Japanese cording from Pacific Trimming, and horn toggles from MyGann on Etsy.  Then for the zipper band and inside bias, I used some lovely plaid cotton flannel from Grey’s Fabrics. I love the hidden zipper on the pattern – both practical for keeping you warm in the winter, and a place to add a fun accent.

I underlined the entire body of the coat with Thinsulate, which, on the first outing out of the house, was much appreciated. At the last minute I also added shoulder pads, and I’m glad I did as it gives it a slightly  more structured look.

I took quite a bit of time trying to get everything perfect, but alas, there will always be mistakes – in particular, when I bagged the lining I “took off” a little more on one side of the zipper than the other, but I didn’t notice until after I’d graded all the seams so there was no going back! For the famously tricky toggles I used a leather needle, and after an ill-fated attempt to use contrasting topstitching thread I reverted to matching regular thread which cunningly hides the wobbles. 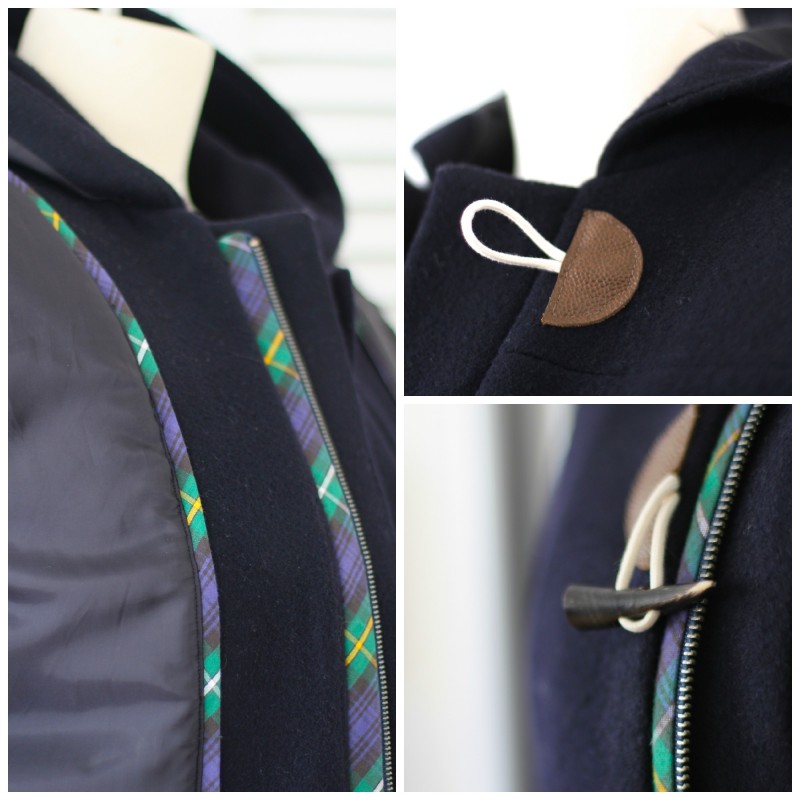 I will admit: this was a bit of a beast to get through the sewing machine. I have a pretty powerful Bernina which glides through jeans without a hiccup, but bagging this coat broke 6 (six!) heavy-duty needles, and involved me having to yank the layers through (yes I’m aware this is why the needles were breaking…). That’s mostly because there are many, many layers at the center front. So, just be aware that you’re going to need a fairly good machine, or to use a lighter weight fabric than me.

So the final verdict is: I’m thrilled with my new coat! It was much easier to make than my other coats thanks to the lack of bust shaping or tailoring, but I think it still looks pretty spiffy. And I look like Paddington. 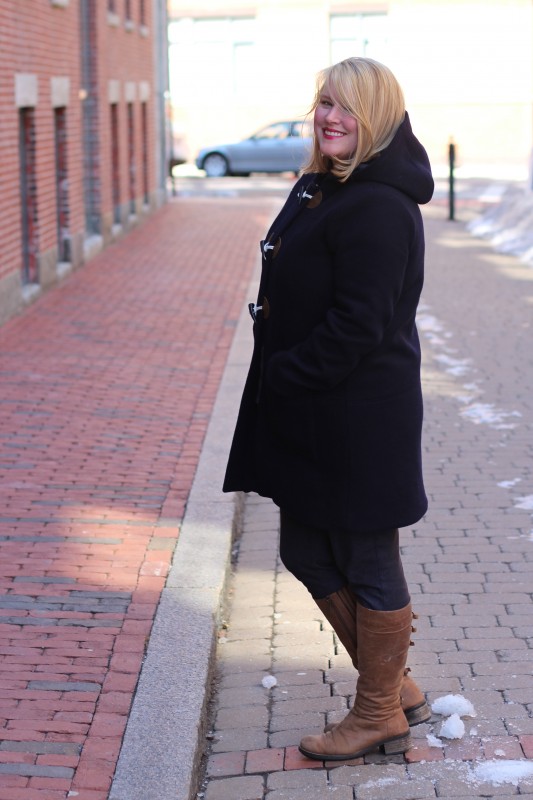 Do you have a soft spot for duffle coats, dear readers? Have you ever wanted to dress up like your favourite Peruvian bear? And are you as hopelessly addicted to coat-making as me? I’m already plotting my next: a traditional trenchcoat…