close
Ever since I made my first pair of Closet Case Files Ginger jeans I’ve been wearing them like… a person who really likes her jeans. As it happens, I thought I didn’t really like jeans because I never wore them much. Turns out I don’t like wearing ill-fitting jeans, but once I had well-fitting ones, I was sold!
I clearly need a few more pairs, but instead of immediately going back to my Ginger kit denim (I used the winter weight length already, but have the second set left) I ordered some off-black cotton stretch denim from EmmaOneSock. The denim was paired with the bronze set of button and rivets from the kit – I finally mastered putting rivets in so I thankfully managed to get all 6 installed first time. 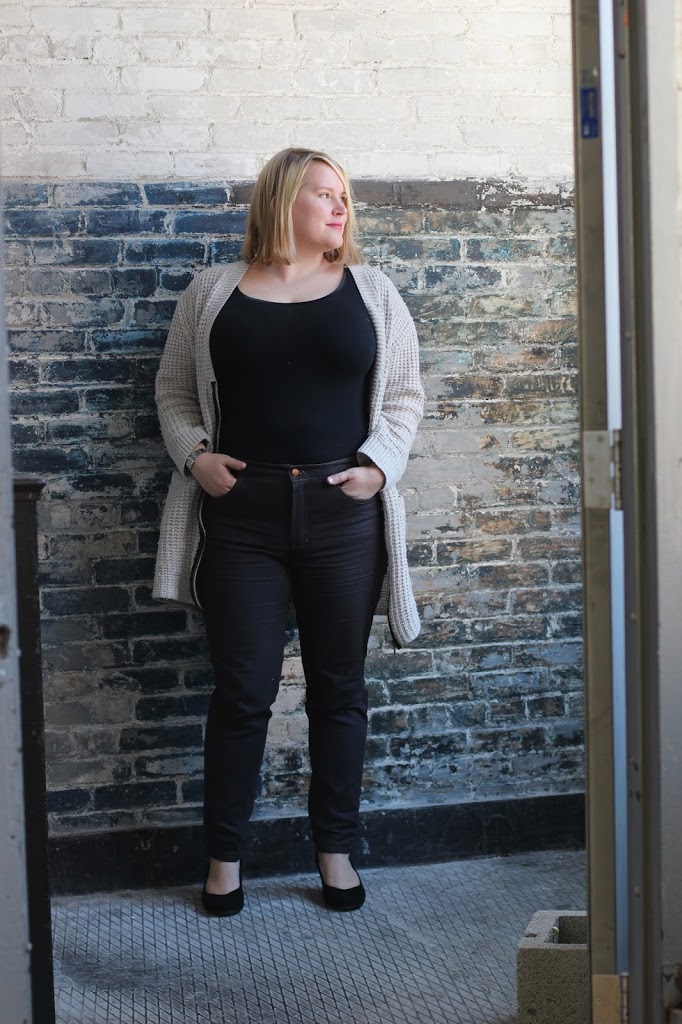 This denim is a lot lighter and stretchier than my Ginger kit, so I made them with a pretty consistent 5/8 seam allowance rather than the varying seam allowances of my original pair. I also went this route because my original Gingers are starting to bag out a little bit (mostly remedied by being thrown in the dryer), and I thought it would behoove me to make these a little tighter to begin with.
The result? Super-skinny jeans! They fit pretty well through the legs, but I must say the waistband is a bit nippy this time. That’s probably because I also took a different waistband approach – instead of cutting on the cross grain without interfacing, this time I went to the opposite extreme, cutting with the grain and interfacing. I think I may have gone too far, as these have very little give – next time, I think I’ll try on the cross grain plus knit interfacing.
They also look a little wrinklier in these photos than my last pair, but that’s mostly because I’d already worn them all day when these photos were taken! They thinner denim does show up lumps and bumps a bit more though, I’ll admit.
I made a few changes to the back: I transferred some length (about 1/2 inch) from the yoke to the legs, and I also realized that last time I accidentally used the view A pockets. Oops! So this time, I used the slightly longer view B ones instead. 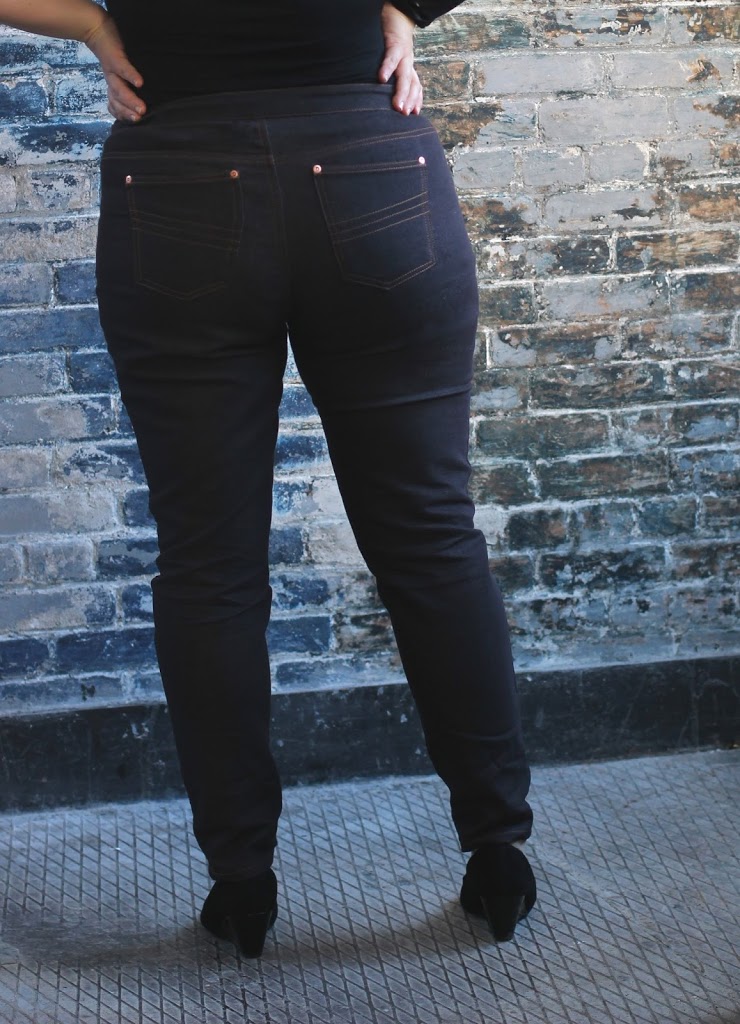 On the inside I made a pocket stay again, and used the same little birdie cotton to face the waistband. Funnily enough this was one of the fabrics I bought when I first started sewing 5 years ago – I don’t think I ever would have imagined it would end up in a pair of jeans! 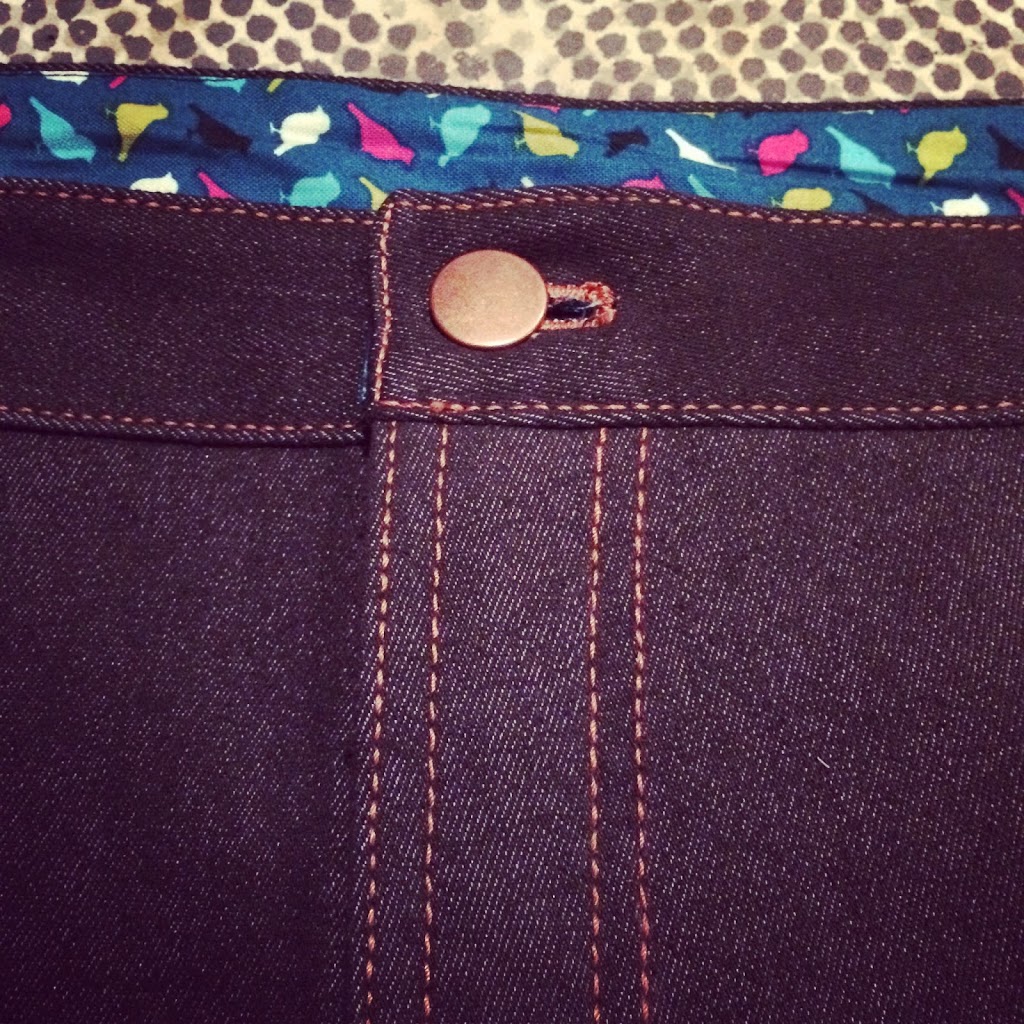 Here’s how they’ll actually get worn! With a hat (actually, probably two hats if we continue having feet upon feet of snow here), and my big and snuggly zip-up cardigan from Iceland. 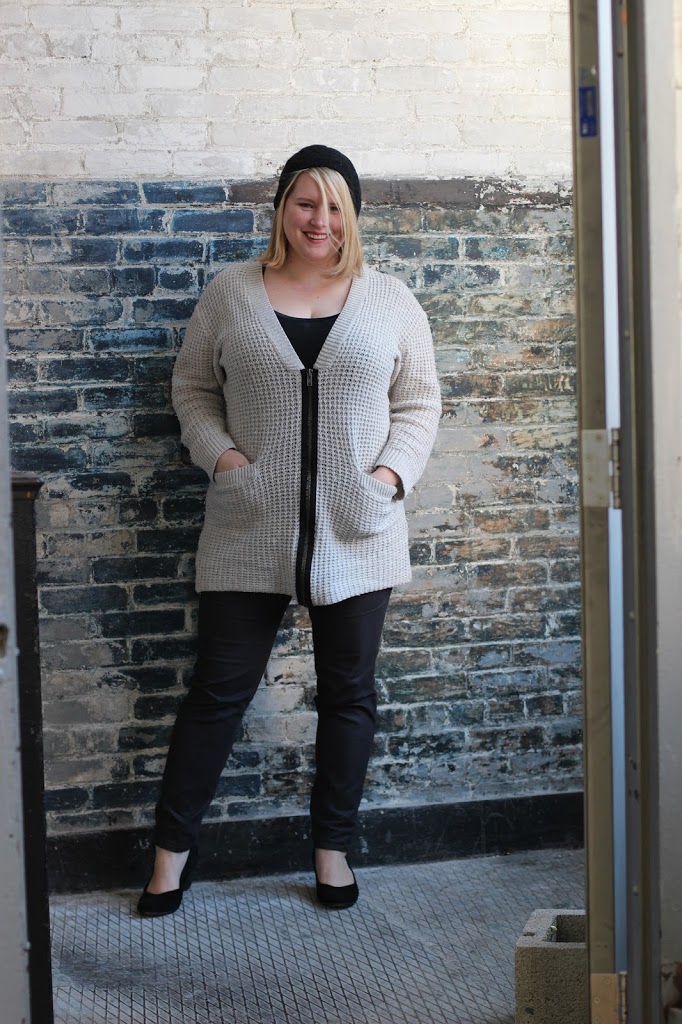 Now I just have to decide what to do about the waistband – whether to hope it stretches a little to be more comfortable, or to remove it and add a new one. Hmmm. Question is, how lazy I’m feeling. I’m also going to make up the second pair from the kit, because I need a proper jeans wardrobe in rotation!
How do you cut your jeans waistbands? Do you go the traditional on-grain, interfaced route, the newfangled cross-grain, non-interfaced, or something else entirely?
Share:
You might also like