close
There are some garments that I think most sewists think of as in an extra-special, extra-“hard” category: swimsuits, bras, jeans and coats come to mind. The silly thing is that most of them aren’t actually that hard or that much more difficult to make than other garments and yet, because they occupy that special mental category, when you manage to make one you feel triumphant.
And so…
CHECK OUT MY TRIUMPHANT CLOSET CASE FILES GINGER JEANS! 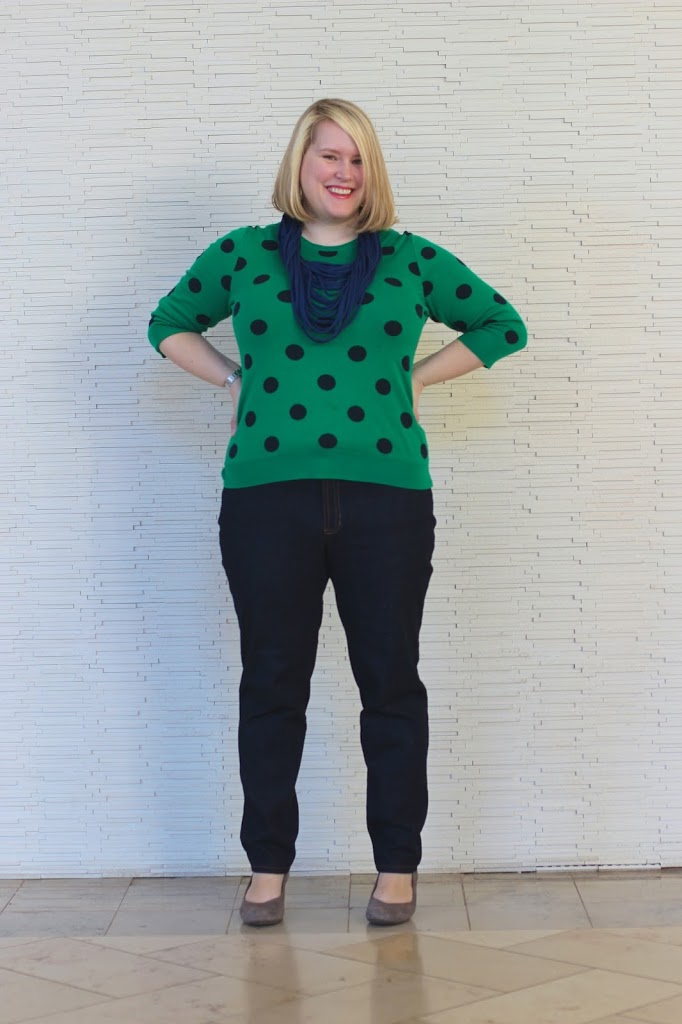 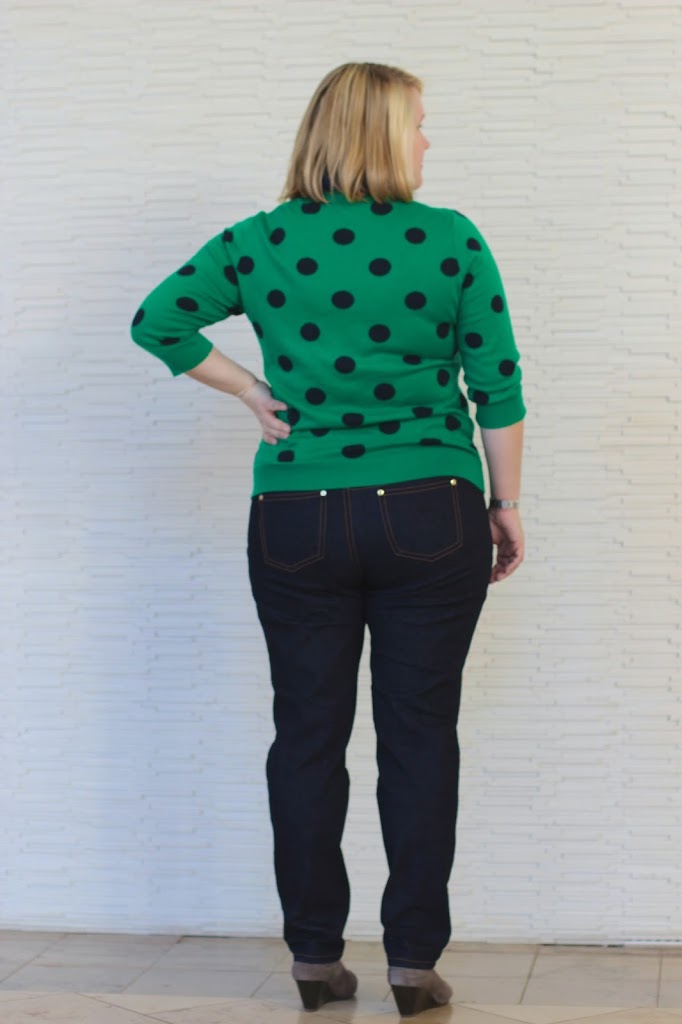 I am quite overcome. Let’s get one thing out of the way straight up: this pattern has been drafted amazingly well. If you think jeans are hard, think again, because between the fantastic drafting, the instructions and the sewalong, you’ll be fine. And they totally capture the RTW fit of skinny jeans in a way I have never seen from the Big 4. For this pair, I used the infamous Ginger Jeans kit – these are the heavier “winter” denim (with 3% lycra), together with a metal YKK zip, and the jeans button and rivet included in the kit.
You may have seen my fitting post last week – based on the comments there and on Pattern Review, here are the changes I made:
– Started with the size 18, view B (allegedly high waisted, but doesn’t really look so on me). If you’re worried about fitting into the sizing range, bear in mind that my waist is 40 – 41″ and the “body measurement” for the 18 waist is 38.5″ and I did no adjustments other than sewing the top side seam at 3/8. As I mentioned before, I think the grading is generous.
– Did a 3/4 inch thin thighs adjustment which basically means you shave excess off the back inner thigh area.
– Did a 1/4 inch flat bum adjustment, which involves dropping the crotch just a little bit
– Then through the basting process, I adjusted seam allowances to give me the best fit (bear in mind I have a larger waist and thinner thighs than average for my size). On the side seams I started at 3/8 at the waist, went to 5/8 through the upper thighs, then down to 1/4 through the calves (which run on the small side in this pattern). On the in-seam I went at 5/8 through the upper thigh, then 1/4 through the calves.
I didn’t get rid of all the back thigh wrinkling, but I did get rid of most of it, and the crotch, err, “issues” are gone. 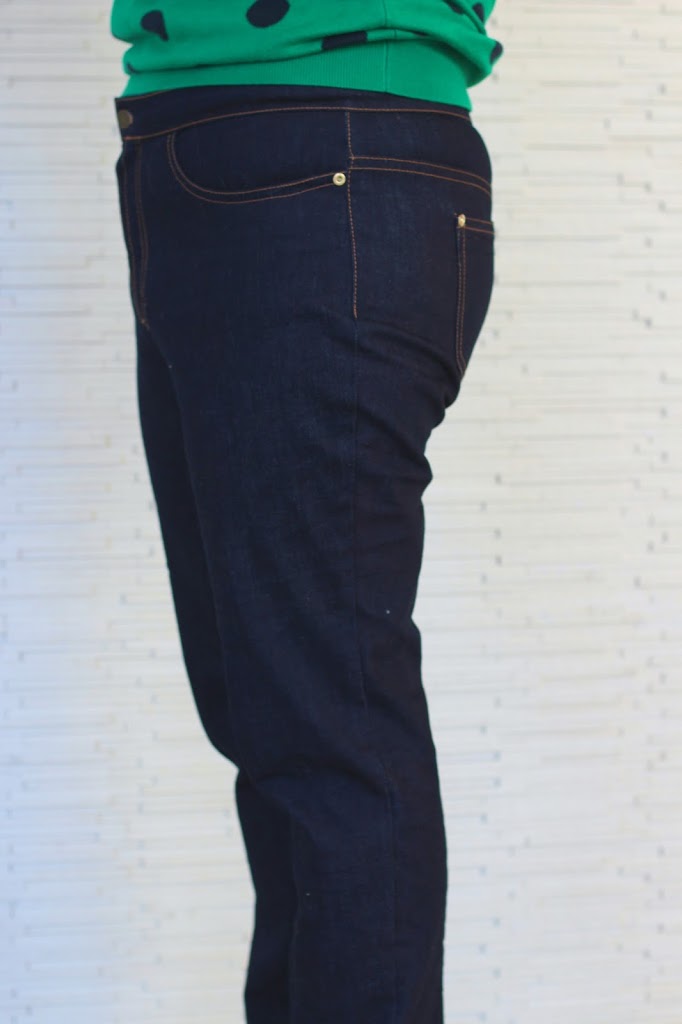 I used the tutorial to add a pocket stay and I’m a total convert – it definitely holds everything in. I most certainly do not have a flat stomach, but my Ginger Jeans aren’t letting on! You may notice that the very top of the fly front buckles – this happens on all my trousers, and I’m not sure whether there’s a way to fix it? Also, I didn’t interface my waistband because I find they often dig into me which is uncomfortable. However, the side effect of that is that it creases a bit in the middle – I don’t mind as I’ll never actually wear these with something tucked in.

For topstitching, I used my ever-trusty Bernina edgstitching foot – this is the kind of magical tool that I was unaware of as a beginner when I thought all sewists must just have lightyears better hand-eye control than me… Using it lets me get a perfect 1/8 distance from the edge. Then, I used my 1/4 inch foot to do the second line. I increased my thread tension to 7 which helped (before, it was pulling the topstitch thread through too much to the back), and I quickly discovered backstitching doesn’t work with this thread on my machine so I started each seam at a low stitch length instead.

One thing that did help immensely was having all three sewing machines out at the same time: my old Brother for doing the seams, my Bernina for doing the topstitching (it worked like a dream, no hump jumper required!) and my serger for finishing all the seams. It would have taken twice as long if I’d had to switch out the thread constantly… 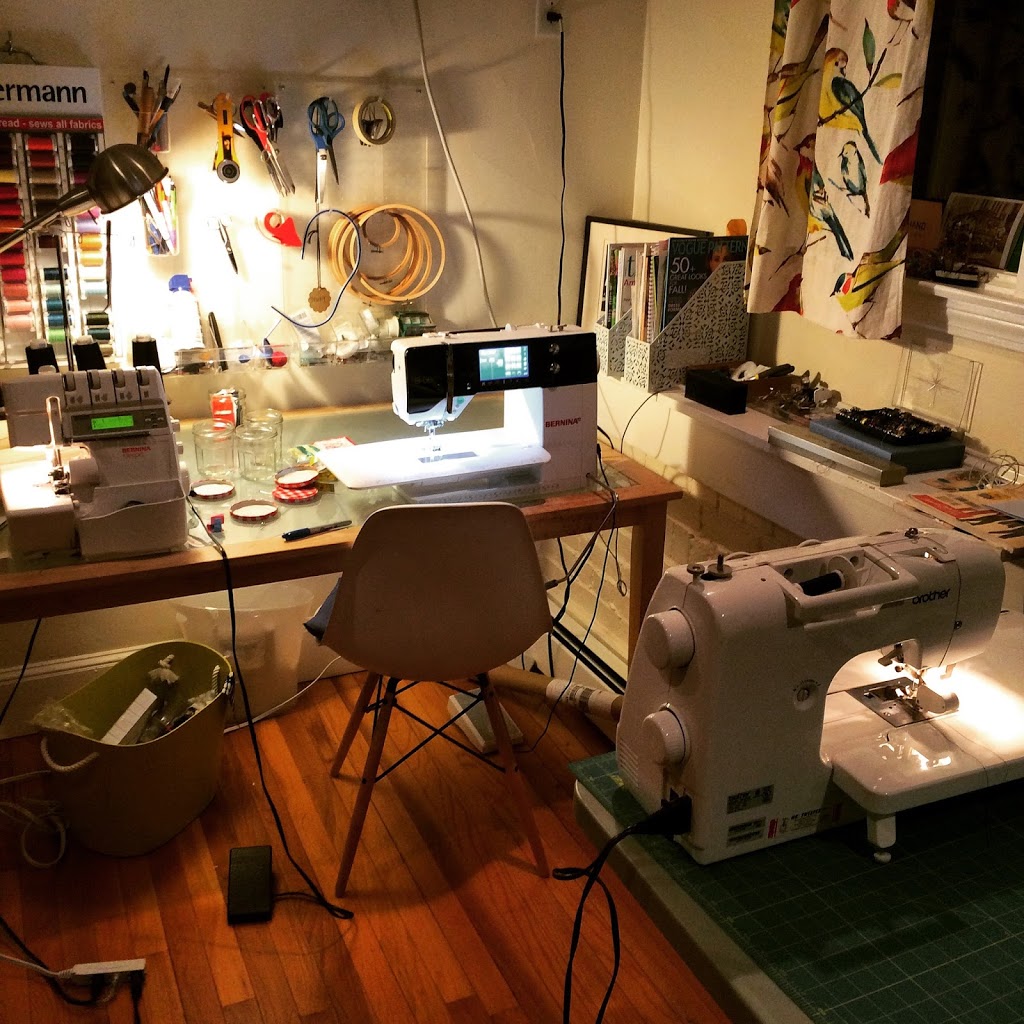 Here are my beautiful Vlisco pocket stays during the construction process – you want something fairly thin but firm to get the effect I think. I decided to get all fancy and French seamed them but actually this wasn’t my brightest idea as it’s hard to do that round a curve, so they’re a little puckered on the inside.

Being a bit of a fool I decided to make these on Friday night in order to take photos on Saturday morning, so I ended up doing my first ever rivets at 1am… Oops. However, after 3 failed attempts I finally got the hang of it. As I didn’t have wire cutters to trim the rivet posts, I used spacers on the back of them instead – basically I cut scraps of denim, and used 3 layers of denim on the back of the rivet, and then trimmed around it afterwards. Worked like a charm. I did find the rivet post punctured the front of the rivet ever so slightly but I think that’s somewhat unavoidable unless you have a proper rivet press. 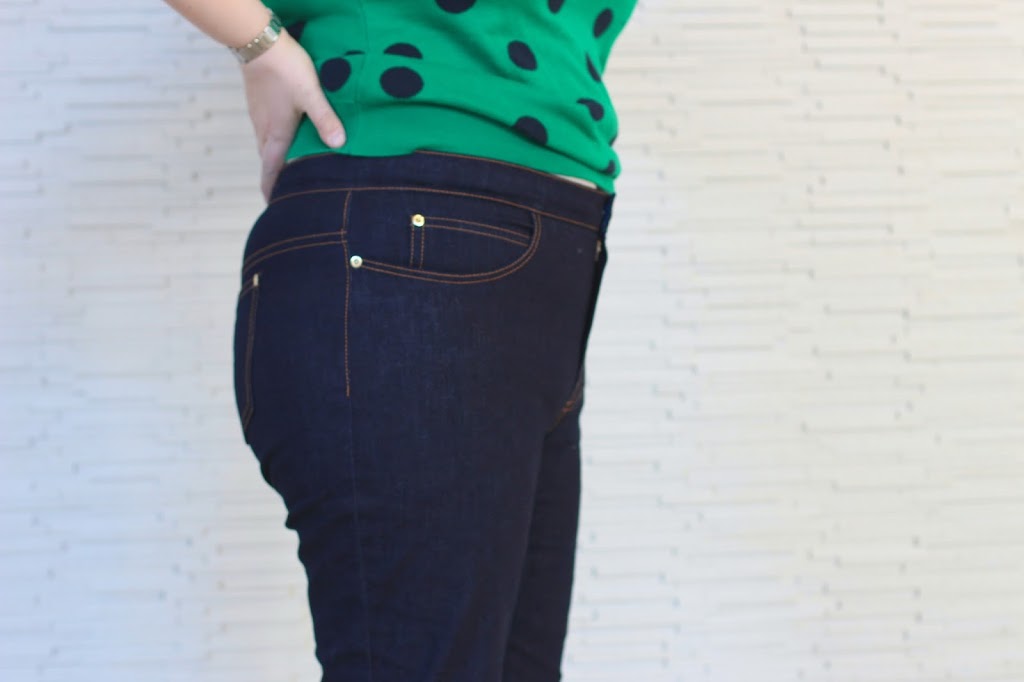 Here’s a big picture of my bum for you. I don’t usually care very much for pictures of my rather flat, rather low, bum, but I have to offer my thanks to Heather for an entirely acceptable back view in these!
I used the height of the pockets we’d tested on my muslin, and I do like them though they could probably be a bit improved. Some folks suggested that I shorten the yoke and I did a little bit, but maybe could more. Again though, I’ll never wear these with something tucked in so really the more relevant back view is the one above, and I think it looks fine. 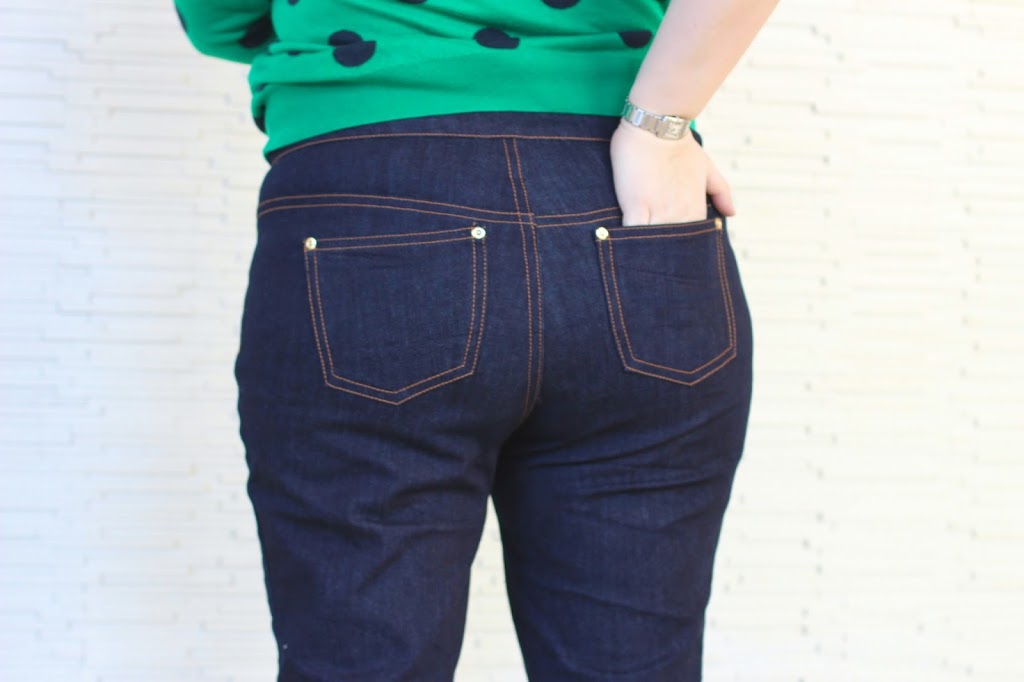 So there we have it: my very first pair of jeans, and they are BY FAR the most well-fitting jeans I’ve ever owned. Who’d have thought it? I am slightly burned out now having made 3 pairs (including my muslins) in a week, so I’m going to put the other denim from my kit away for a bit, but trust me, I’ll be back before long. 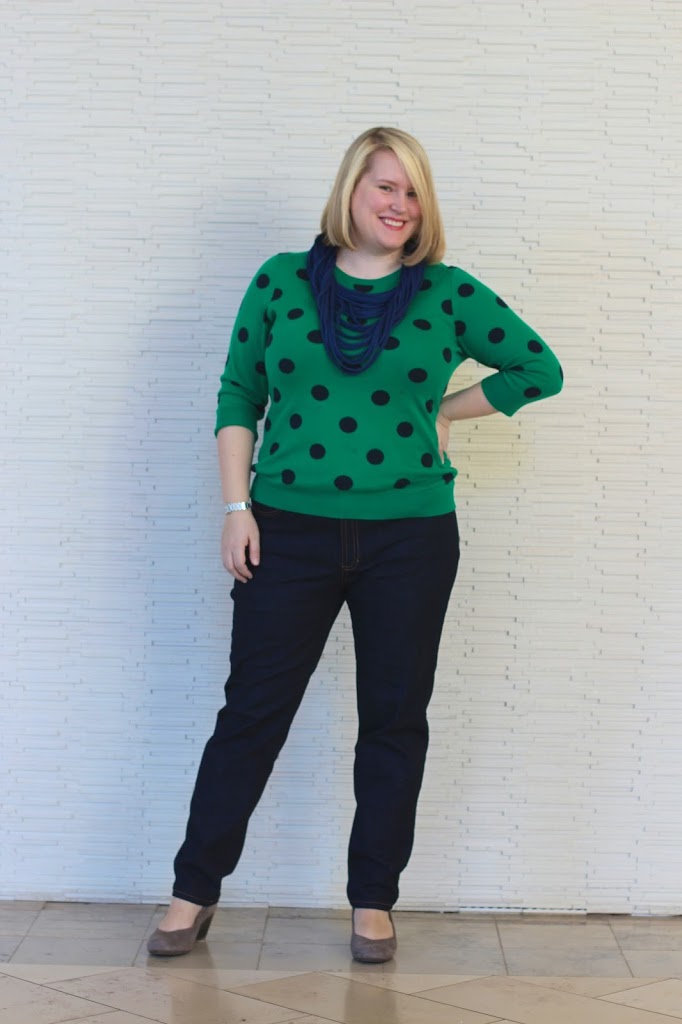 Who else has tried the Ginger Jeans? Do you love them too?

118 thoughts on “Starting the new year with a hit: my Ginger Jeans!”

Sign up for our newsletter and you’ll receive exclusive offers, curvy sewing news, and 10% off your next purchase.
END_OF_DOCUMENT_TOKEN_TO_BE_REPLACED