close
It’s time for awkward staring at my pelvis time! YEAH!
I decided to make Heather Lou’s latest creation: the Ginger Jeans. A cool skinny jeans pattern has been long overdue in sewing world, so I was as pleased as everyone else was when it was released. Initially I assumed I couldn’t make them as I’m slightly outside the size 18 sizing, with a 40″ waist and 47″ hips, but then I realized that I shouldn’t be dissuaded by such trivialities… after all, that’s why we sew (even if it takes curvy sewists rather longer when you have to do adjustments. C’est la vie.)
As jeans often require quite some fitting, I decided to whip up two muslins, one for each view: the Ginger A, which are lower rise with stovepipe legs, and the Ginger B, which are higher rise with skinny legs. I’m glad I did because it didn’t play out quite as expected!
Today I’m sharing awkward photos of my muslins so you can see how I’m getting along… I’m hoping that my final version, made with the Ginger Jeans kit cone denim will be even better.
One stroke of genius I had was to first take photos wearing my most-commonly-worn Boden jeans, to set a benchmark. It’s really really hard (impossible perhaps?) to get perfectly fitting jeans with no wrinkles anywhere, so I wanted to make sure I was comparing realistically. And a good idea it was. Because here are the jeans I regularly wear and have never had any issues with: 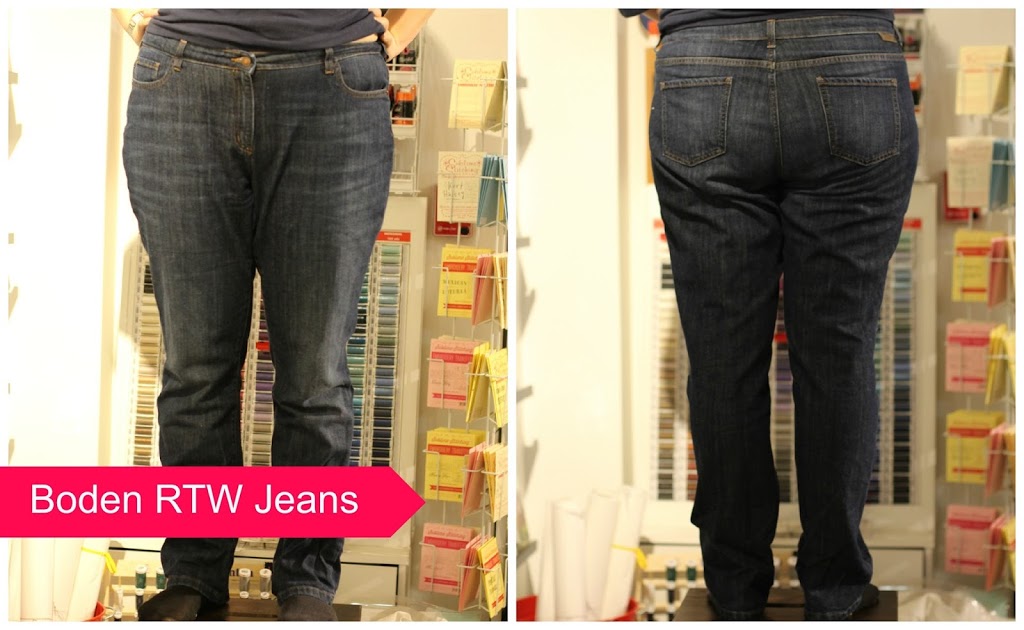 Eek! You can see my classic issue here with RTW trousers: if they fit my waist (which these do), then they are bag-a-licious through the upper thighs. That’s quite a fold I have on the front there… yikes. And mega bags under my bum.  OK. Deep breath. Remember that I wear these regularly and don’t think they look that awful in real life.

Next up: Ginger As. For these, I graded up the waist by 3 inches (based on the finished measurement charts). It turned out that was too much – I hadn’t fully accounted for the stretch in the denim, plus I think that the grading is on the generous side. As a result, these are slightly loose at the waist and tend to slip down. In addition, this low rise just doesn’t work with my hip shape – I don’t have enough curve to keep them up! Still I must admit that they already look better than my Boden ones! 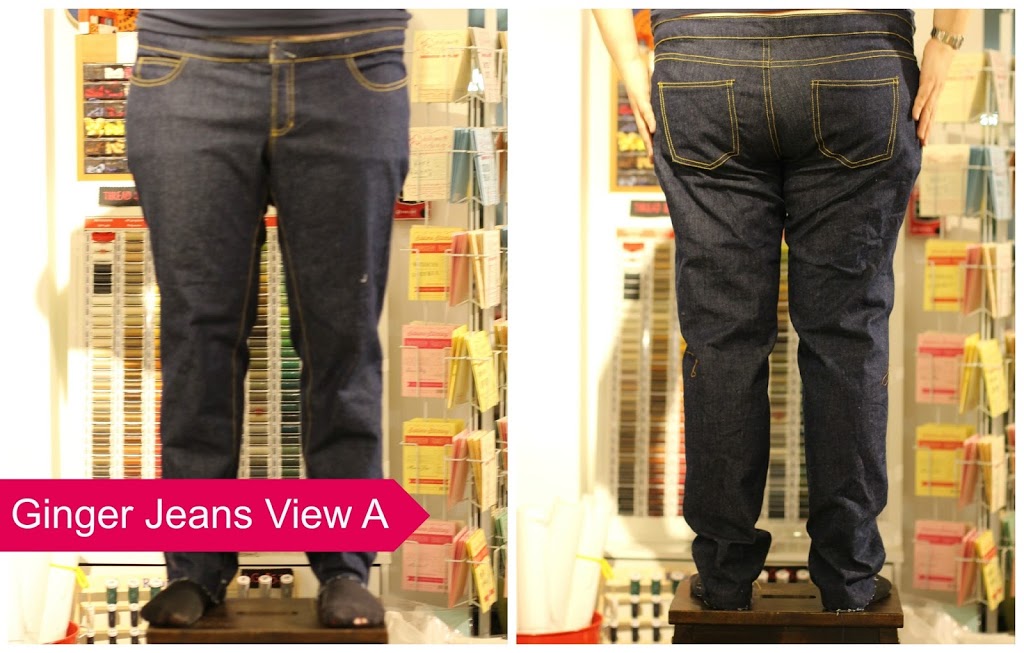 And now the best option I think: the view B. On trying these on, I immediately realised that “high waisted jeans” aren’t high waisted on me, because I have a very high waist in the first place! They just feel normal to me. I did a thin thigh adjustment (basically took extra off the back inseam), and I also did the flat bum adjustment that scoops things up a bit in the bum area. I think I overdid that – it’s a bit too scooped – so for my final jeans I need to add a bit back in. I also made an error when I made these and somehow ended up easing the jeans into the waistband and chopping off some waistband… why oh why oh why? Anyway, as a result, they’re too tight there, but I’m confident that if I just sew them properly I won’t have that problem.

Beyond that: there’s still bagginess on the back thighs. Should I do more of an adjustment there? Maybe take in the side seam too? It’s also pulling a bit in the front crotch but I’m thinking maybe adding back into the back crotch will help alleviate that – does that make sense?

Finally, I had my Crafty Foxes play “pin the pocket on the Jenny bum”, and as you can see below, the right hand side higher, further out, version worked better for me – I’m in the “make it look rounder and bigger” camp! 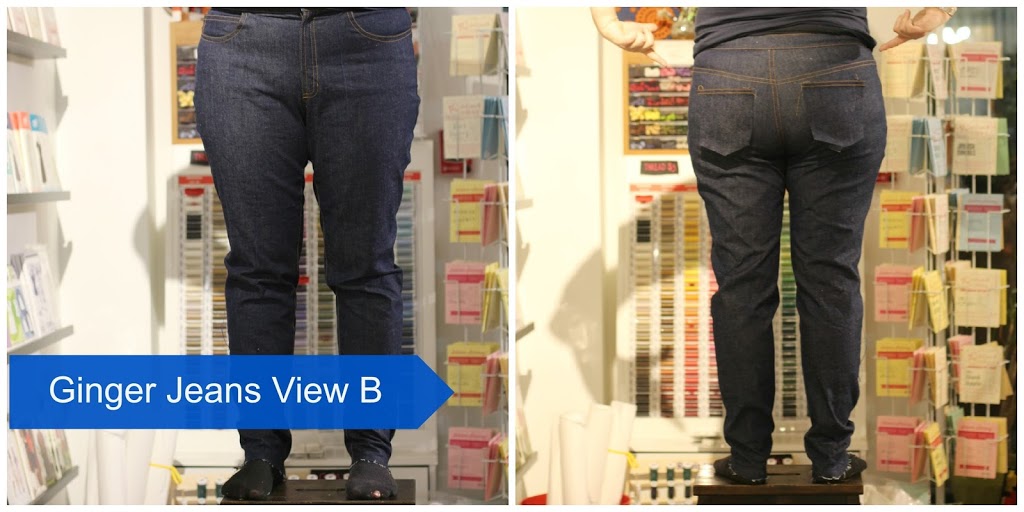 So there we go – I can’t quite believe how easy these were to put together (awesome sewalong, Heather), and that I procrastinated for so long. I”m looking forward to whipping up my finals hopefully later this week!

54 thoughts on “Fitting my Ginger Jeans”

Sign up for our newsletter and you’ll receive exclusive offers, curvy sewing news, and 10% off your next purchase.
END_OF_DOCUMENT_TOKEN_TO_BE_REPLACED