close
While I continue battling on with my coat, I thought I’d whip up an easy TNT outfit and make full use of those adorable flamingos, which I wisely over-bought when purchasing the lining for the aforementioned coat. Another McCalls 6931 if you please! 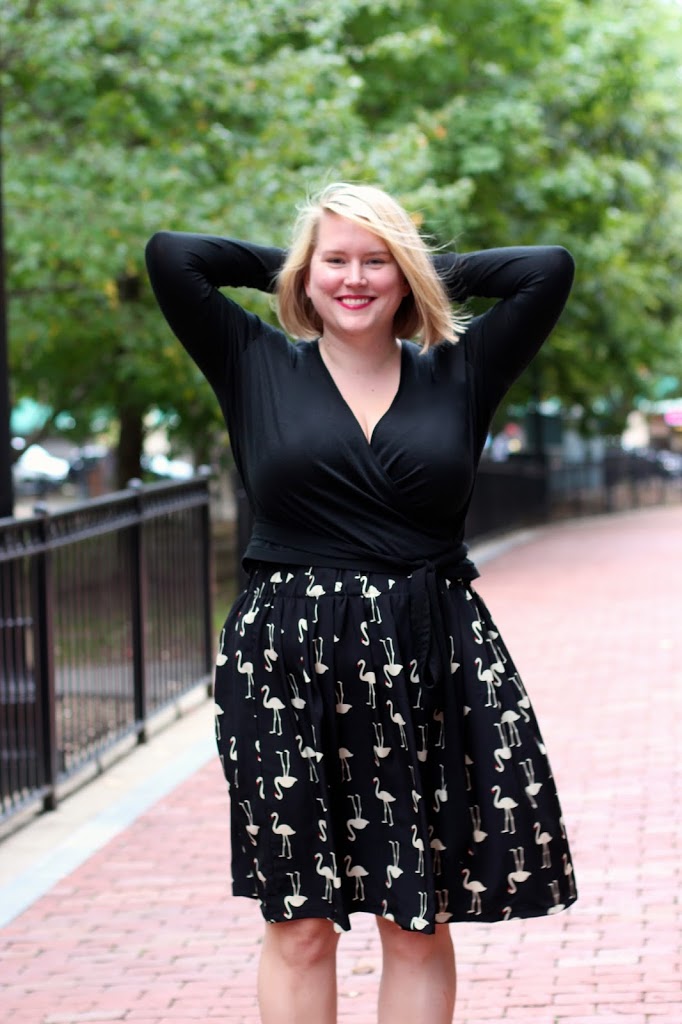 Even though this pattern is pretty basic, the combo of pleats and elastic waistband and only taking 90 minutes to make is a winner in my book. It works best with swooshy fabrics, and these flamingos were most certainly swooshing around on the poly crepe de chine. I bought mine from EmmaOneSock, but it’s still available from Caroline Amanda’s new venture, Blackbird Fabrics. 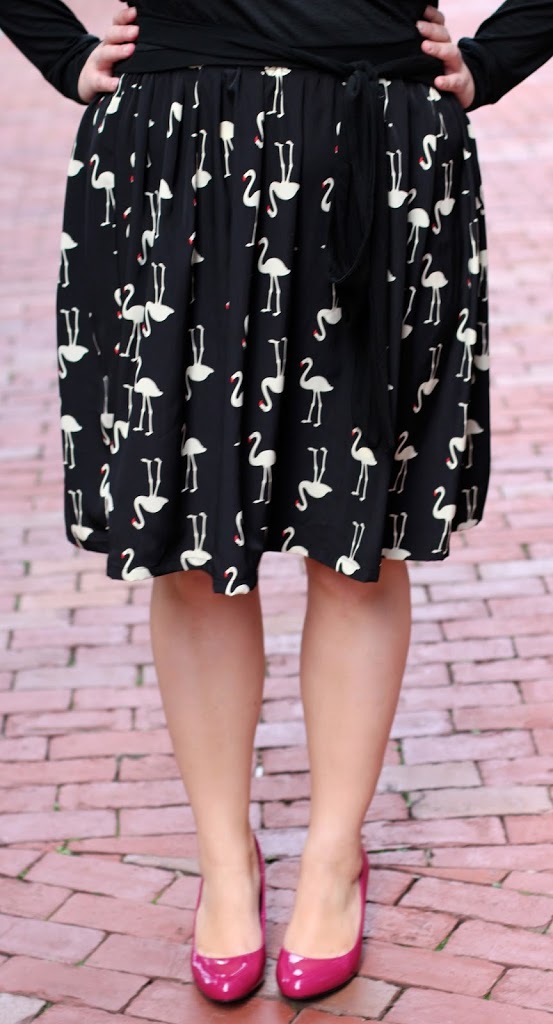 YES I AM A FLAMINGO LADY. 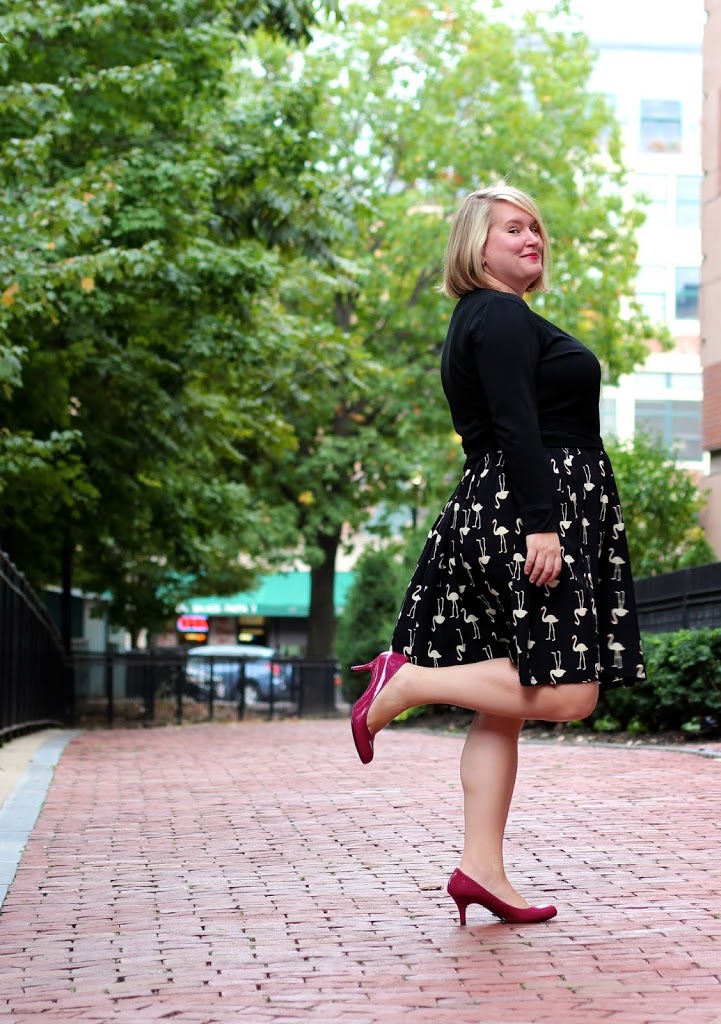 In addition, I have been mulling the possibility of making a wrap top with my dear Christine Jonson wrap dress pattern, and finally made it happen. I don’t know what I was waiting for – it took all of an hour and I totally love it. All I did was hack the pattern off just below the waist, and then add a 1 inch hem band. I didn’t bother making a hole for the ties to go through, and it seems to work fine just wrapping around my waist. I used an gorgeous merino wool sent all the way from New Zealand by the lovely pink-haired Sophie-Lee. 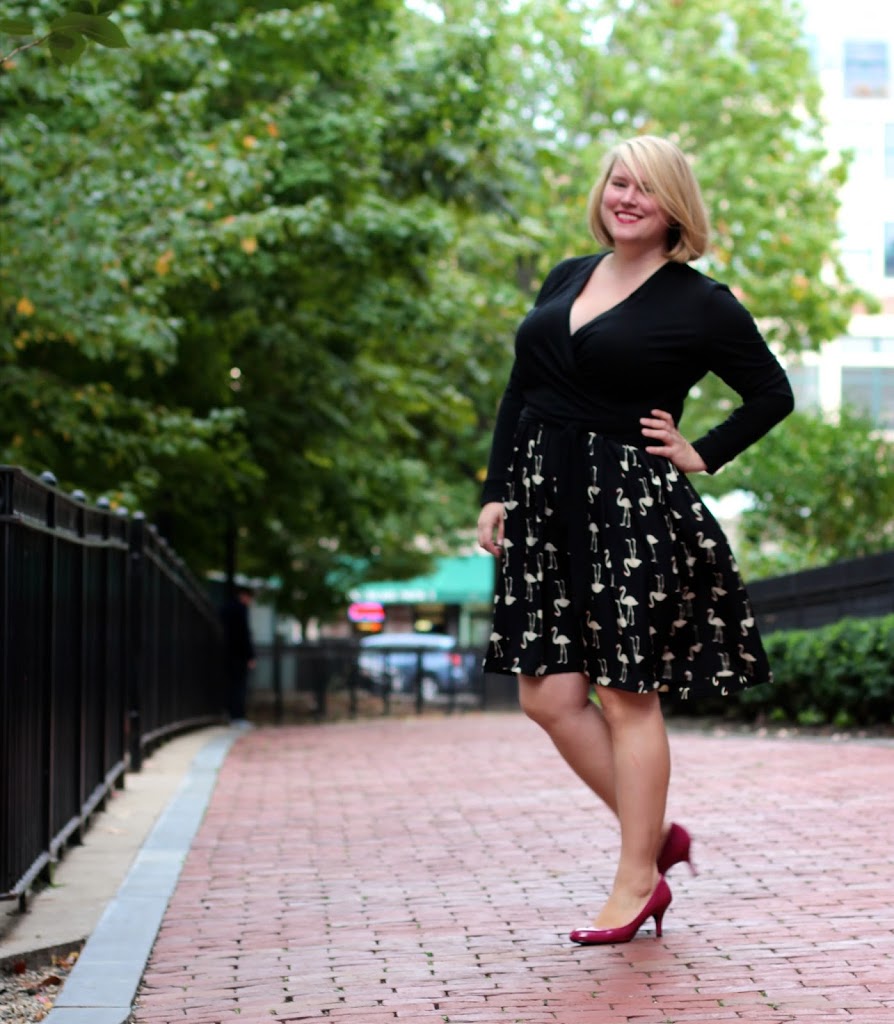 My other bit of news is that I was nominated by my dearest sewing friend Mary of Idle Fancy to participate in the seemingly never-ending blog hop that’s been going around. So if you’re interested, read on – and if not, scroll back up… look! flamingos!
Why do you write?
I’ve always enjoyed writing, although for a long time it was mostly confined to schoolwork. However a while back I started up a blog about books, after telling someone that I read about a book a week during the year and then wondering if that was really true. Turns out it was! Then, there was a hiatus until Lauren and I learned how to sew, rapidly started learning almost everything from the sewing blogosphere, and then decided to join. Rediscovering the joy of writing has been just one of the many things blogging has brought me, and for that I am grateful.
How do you write?
My blog posts usually start with pictures, and I’m lucky enough to have a sewing lady blog photo posse. I’m most often joined by Katy & Laney but also sometimes by Ping, Carrie and MacKenzie, and the day usually goes like this: rendezvous at my house. Get coffee. Wander the streets looking for a blank wall with good light. Two or three of us take photos of the other one, paparazzi style, hiding in bushes, up trees, and, a favourite, standing directly in the middle of the road. Repeat. Get the lint roller out. Adjust hair. Get another coffee. Well deserved brunch. As you can tell it is a most pleasurable approach to blog writing.
Then it’s back home, and I usually edit and write my posts straight away. I’m generally a “fast” person  – I read fast, write fast, talk fast and so on. So blog post writing gets done fast – I don’t think it ever takes more than an hour from photo editing to finishing. Luckily (for me at least), my writing is pretty similar to how I think and talk so it tends to come easily, and I don’t worry much about how things come across – I figure if you like it, you like it, if you don’t, you’ll stop reading!
How does your blog differ from others of its genre?
I don’t think my blog is entirely unique (apart from the fact it’s the only one exclusively featuring me!) but I do think I’m in a small but growing group of curvier bloggers who don’t talk about trying to get smaller or look thinner, but rather just get on with looking good and making what we want to wear. When I started reading blogs it took a while before I found kindred spirits, but just in the past few years I’ve noticed so many more compatriots and that’s incredibly heartening. Of course there’s also the Curvy Sewing Collective, which has also hopefully helped encourage more curvy women to get sewing and blogging!
What are you working on next?
Well that’s that #*?!@ coat… But I also have some awesome laser cut neoprene that I’ll be making a pencil skirt from; some Prada (apparently!) silk to make a busty-lady Archer, and some pattern testing which hopefully will yield an incredible silk Christmas party dress!

So, passing on the blog hop next.. it’s hard to choose! As I’ve mostly seen fairly well-known bloggers participate so far,  I thought I’d throw it to a newbie: Rosie from SparkleNeedles. 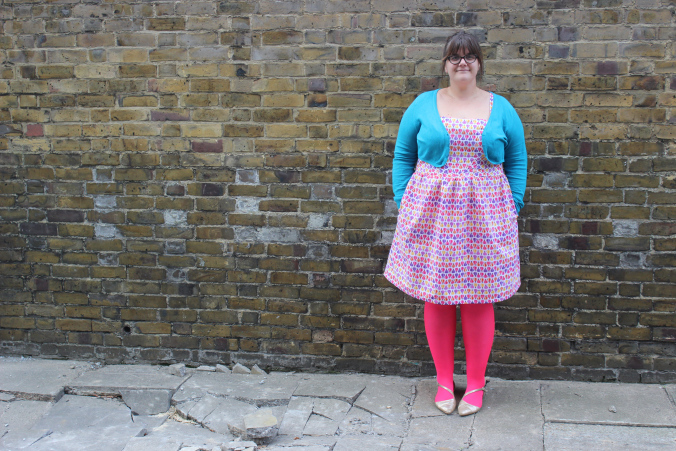 Rosie has only just started sewing and blogging but 1) she is hilarious. Like, really, really funny 2) she is already getting so good! 3) I love her style (it is, in her words “a 5 year old at a rave”)  4) it’s fun to revisit the beginner days and 5) did I mention she’s hilarious? Anyway, you should totally check out her site, and even though I know she’s only just started blogging I would love to hear her answers to the blog hop. Over to you, Rosie!

27 thoughts on “Flamingos and a blog hop: a classic combination”

Sign up for our newsletter and you’ll receive exclusive offers, curvy sewing news, and 10% off your next purchase.
END_OF_DOCUMENT_TOKEN_TO_BE_REPLACED