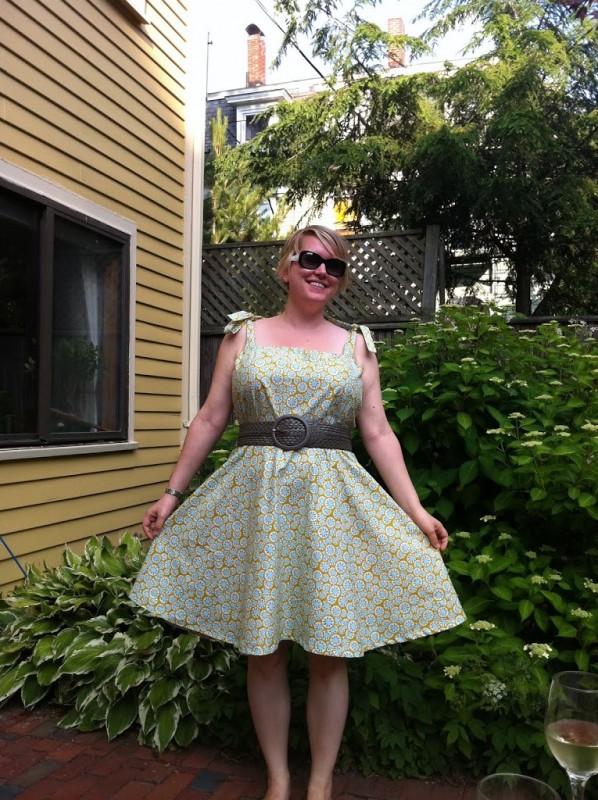 So, there have been a few ill-fated attempts at dress-making Chez Rushmore. Let’s just say none of them passed the ‘ good GRACIOUS that looks home-made by a half-blind gnome’ test (that’s an official test, by the way)
However with 10 months of dormancy behind me, I had clearly forgotten my humiliations, and set out one more time to make a dress, courtesy of my ever-trusty Chic and Simple Sewing Book a.k.a. the no-buttons, no-zips couturier’s dream.
I used some fabric my Mum bought me last summer, and with about two evenings’ work, I had an “Indian Summer Dress” all of my very own. I am quite-to-moderately pleased with it. The shoulders are kind of fun (they are ties), and there is a definite pleasure in a circle skirt. However, it was tricky to get the whole bust/waist ratio right (quelle surprise, regular readers), and it only really works cinched in with a belt.
However, the proof is in the wearing. And I must say that I felt confident enough to wear it to a fancypants dinner (with a brown cardie and some brown Camper wedge heels which rarely see the light of day), and then again to a lobster barbeque, at which a woman of considerable taste complimented me on it *while not knowing it was handmade*. Not too bad! Having since discovered French Seams, I do now have another roll of fabric for an attempt 2, and a slow-but-sure increase to my summer wardrobe.
Share:
You might also like

Sign up for our newsletter and you’ll receive exclusive offers, curvy sewing news, and 10% off your next purchase.
END_OF_DOCUMENT_TOKEN_TO_BE_REPLACED